At the request of Martha and Mary, Jesus visited the grave of their brother Lazarus and raised him from the dead (John 11:1–44). Sebastiano shows Christ standing with one hand raised to invoke the power of God and the other pointing to Lazarus, who is seated on the edge of his stone tomb.

Christ speaks the life-giving words, ‘Lazarus come forth’. A kneeling man helps Lazarus remove the shroud and bindings in which he had been buried. Mary kneels at Christ’s feet in awe while Martha raises her hands and turns her head away, unable to look. Saint Peter at bottom left falls to his knees while other disciples turn to one another in amazement.

The painting was commissioned for Narbonne Cathedral in southern France by Cardinal Giulio de' Medici, who had also commissioned Raphael’s Transfiguration for the same cathedral. Michelangelo provided drawings for some of the main figures in this complex composition as he was keen to help Sebastiano outperform Raphael, their artistic rival.

At the request of the sisters Martha and Mary, Christ visited the grave of their brother Lazarus and raised him from the dead (John 11: 1–44). Sebastiano shows Christ standing in the foreground with one hand raised to invoke the power of God and the other pointing to Lazarus, who is seated on the edge of his stone tomb.

Christ speaks the life-giving words, ‘Lazarus come forth’. The resurrected Lazarus stares in wide-eyed shock at his saviour, while a kneeling man helps him remove the shroud and bindings in which he had been buried. Mary kneels at Christ’s feet in awe. Martha, who had just reprimanded Christ for arriving too late to heal her brother, raises her hands. She averts her gaze, perhaps in awe and perhaps partly in shame at having doubted Christ’s ability to help her dead brother, for which he reprimanded her with the words, ‘I am the Resurrection and the Life. Anyone who believes in me will live, even after dying.’

Saint Peter at bottom left falls to his knees, while other disciples turn to one another in amazement. Three women cover their noses against the smells from the opened grave. A crowd surges along both banks of the river from the distant town to observe the miracle for themselves. Faces are varied – young and old, dark and fair, male and female – and display a wide variety of reactions to the miracle, encouraging the viewer to share in their emotions and arrive at their own interpretation of what is happening.

The painting brings together more than 40 characters in a dense and complex composition. The basic arrangement is derived from Giotto’s treatment of the subject in the Scrovegni Chapel, Padua. Giotto’s Tuscan masterwork was painted in the Veneto, and Sebastiano’s painting combines elements of Florentine and Venetian artistic traditions. The graphic, linear design of the figures owes a great deal to Florentine examples, but the way it is painted is more typical of Venetian art, with the design drawn freehand onto the panel with a brush and, in places, with substantial revisions made during painting. It is a bravura display of oil technique, interweaving a remarkable range of bright colours across the surface. Sebastiano’s approach, creating subtle variation in hue and depth through the use of oil glazes, is typically Venetian. However, his high-key colour range and use of cangiante colours – sharp gradations of colour to resemble shot silk – are the direct result of his admiration for Michelangelo’s bold, unnaturalistic colouring on the Sistine Ceiling in Rome.

The Raising of Lazarus was commissioned by Cardinal Giulio de‘ Medici (1478–1534), probably in late 1516, as an altarpiece for Narbonne Cathedral in southern France, where he had just become bishop. Lazarus was especially venerated and was believed to have preached there. Around the same time, Giulio commissioned Raphael to paint another altarpiece for the same destination – The Transfiguration (now in the Vatican Museums, Vatican City). The pairing the Transfiguration and the raising of Lazarus was a tradition stretching back to medieval times.

The rivalry between Raphael and frequent collaborators Sebastiano and Michelangelo was fierce. In a letter dated 19 January 1517, Michelangelo’s friend and assistant Leonardo Sellaio wrote to the artist in Florence that Sebastiano feared Raphael would do everything in his power to prevent him from finishing the painting so it couldn’t be compared to his own work. In January 1518 Michelangelo briefly visited Rome and helped Sebastiano to revise the figure of Lazarus (three preparatory sketches by Michelangelo survive, in the Musée Bonnat, Bayonne and the British Museum, London). On 2 July 1518, Sebastiano wrote to Michelangelo to say that the altarpiece was almost finished, but that he was delaying completing it as he did not want Raphael – who had not yet started his own painting – to see the result. Raphael was reportedly attempting to have Sebastiano’s altarpiece dispatched to Narbonne so that the two paintings could not be viewed side by side in Rome. Sebastiano finished work on the painting by May 1519, when it was put on public view in his studio in Rome; in December 1519 it was formally unveiled at the Vatican to great admiration from everyone including the pope. This coincided with the birth of Sebastiano’s first son, for whom Michelangelo became godfather.

Sebastiano consciously responded to ideas pioneered by Raphael. The vertical arrangement of the narrative derives from Raphael’s Christ falls on the Route to Calvary, the so-called ‘Spasimo di Sicilia’, of 1516–16 (Prado, Madrid). In that picture Raphael had arrived at a groundbreaking solution to the long-standing problem of fitting a narrative into the vertical format of an altarpiece – he placed the focus of the action in the foreground below a high horizon line and then depicted the rest of the action in the background. Raphael’s Transfiguration similarly adapts elements of Sebastiano’s work – the gesture of the apostle pointing to Christ is derived from Sebastiano’s Lamentation of Christ (State Hermitage Museum, St Petersburg), and its arrangement of the apostles at the left and the kneeling woman reflects and seems to offer a critical comment on Sebastiano’s composition in the Raising of Lazarus. Raphael must also have been following the progress Sebastiano was making at the same time on his Transfiguration in the Borgherini Chapel in S. Pietro in Montorio in Rome; his painting provides a more weightless counterpoint to Sebastiano’s more grounded composition.

In a tragic twist of fate, the first display of Raphael’s Transfiguration was above his own coffin. He died from a fever on his thirty-seventh birthday, 6 April 1520. While Sebastiano’s Raising of Lazarus was sent to Narbonne Cathedral, Cardinal Giulio decided to keep Raphael’s Transfiguration in Rome and commissioned a copy of it to be sent to France. He placed the original on the high altar in the church of S. Pietro Montorio in Rome, close to Sebastiano’s Borhgerini chapel, with its version of the same subject. 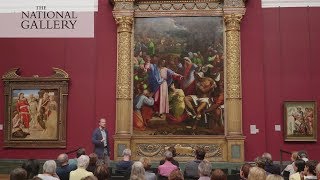 Judith (or Salome?)
Sebastiano del Piombo
A young woman is moving towards an open window or door through which a hilly landscape can be seen. She turns to look back at us over her shoulder, her arm parallel with a stone parapet on which the date 1510 is written. On a metal salver she carries the greyish-green severed head of a man. The w...
Room 12
Portrait of a Lady
Sebastiano del Piombo
Room 12
Portrait of a Lady with the Attributes of Saint Agatha
Sebastiano del Piombo
The lady in the picture is shown with the attributes of Saint Agatha, the third-century Sicilian martyr who was reported to have been tortured for rejecting the marriage proposal of the Roman governor. A dish with Agatha’s severed breasts and the pliers used to remove them are depicted on the rig...
Not on display
The Madonna and Child with Saints and a Donor
Sebastiano del Piombo
The Virgin Mary turns to look down at the kneeling man beside her and extends a protective arm around his shoulder. Saint John the Baptist points at the lively Christ Child, while Saint Joseph sleeps with his head on his arm. The diagonals in the composition draw the viewer’s eye to Christ’s gaze...
Room 9