‘Rembrandt: The Late Works’ explores the Dutch master’s highly expressive and radical artistic style in works from the early 1650s until his death in 1669. From bold manipulations of materials and techniques to progressive interpretations of traditional subjects, this feature highlights some of the themes explored in the show.

More than any other artist, Rembrandt consistently represented his own likeness throughout his artistic career. Around 80 painted, drawn or etched self-portraits are known, ranging in style from quick sketches to highly composed likenesses. The late self-portraits in particular are incredibly thoughtful and honest, and attest to Rembrandt’s ability to convey old age in a highly sympathetic light.

Rembrandt’s Self Portrait at the Age of 63, painted in the final year of his life, reveals that he never lost the urge to experiment, even with compositions as familiar as his own likeness. X-radiographs show that Rembrandt made changes directly onto the canvas as he worked. For example, we know that the cap was originally all white (a proper painter’s cap) and larger; extending further upwards and to the right. His clasped hands were originally open and held a paintbrush, to show an artist at work. 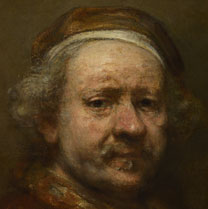 Detail from Rembrandt, 'Self Portrait at the Age of 63' showing his head 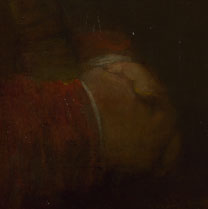 Detail from Rembrandt, 'Self Portrait at the Age of 63' showing his hands
Viewing page 1 (6)