Rembrandt was praised by early critics for his skilful ability to manipulate light and shadow for forceful aesthetic effects. His profound understanding of the use of light to convey spiritual and intellectual ideas is especially evident in his later works.

Rembrandt, 'The Conspiracy of the Batavians under Claudius Civilis', about 1661-2, The Royal Academy of Fine Arts, Sweden © Rijksmuseum, Amsterdam

One of the most impressive illustrations of this skill is ‘The Conspiracy of the Batavians under Claudius Civilis’, today only a fragment of the monumental painting that originally measured approximately 5.5 metres high and wide. The Batavians were a small Germanic tribe that lived in the area of the Netherlands during the first century AD and bravely revolted against Roman rule. Rembrandt shows them swearing a pre-battle oath, an event said to have taken place in the middle of the night.

Rembrandt’s ingenious solution to the necessity of employing an artificial light to illuminate the scene was to hide the light source (a single lamp) behind the figures in the foreground. This allowed him to create a magnificent glow that eerily illuminates the figures from below. 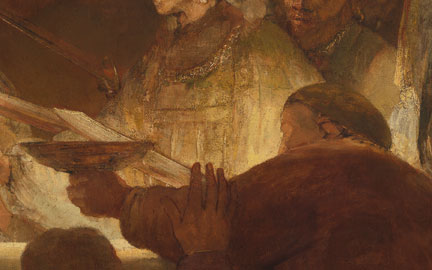 Detail from Rembrandt, 'The Conspiracy of the Batavians under Claudius Civilis', about 1661-2, The Royal Academy of Fine Arts, Sweden © Rijksmuseum, Amsterdam
Viewing page 2 (6)