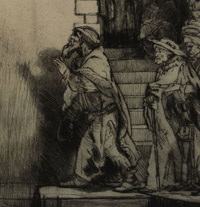 Rembrandt’s consistent experimentation with materials and working methods is one of the most distinctive features of his late career, and clearly evident in his prints. Rembrandt employed traditional printmaking techniques in novel ways, and used a variety of exotic papers. More than any other artist before him, Rembrandt relied on drypoint, a technique that involved scratching directly into the copper printing plate with a delicate needle, creating metal scrapings around the lines. When printed, these scrapings produce a wonderful velvety effect known as burr.

Unfortunately the delicate drypoint lines wore down quickly, as was the case with Rembrandt’s famous print, ‘Christ presented to the People (Ecce Homo)’. This meant that Rembrandt had to rework and repair his plate several times. He used this as an opportunity to revise his composition, completely eliminating a crowd of people that stood before the dais in earlier states of the print. 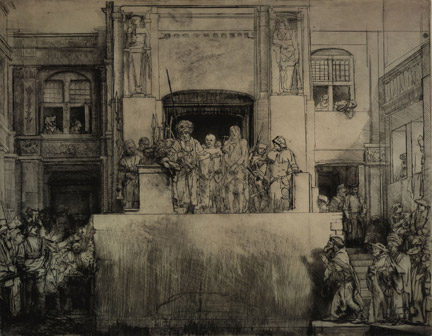