In light of the current retrospective at Tate, Colin Wiggins, Special Projects Curator at the Gallery, discusses the work of Frank Auerbach and the artist’s relationship with the National Gallery

Tate Britain’s major retrospective of the work of Frank Auerbach (9 October 2015–13 March 2016) is a long-awaited exhibition that demonstrates the artist’s status as one of the most significant painters working today. Arriving alone in England as an eight-year-old refugee from Nazi Germany in 1939, after the war Auerbach studied at St Martin’s School of Art and the Royal College of Art from 1948 to 1955 but his attendance at the evening classes run by David Bomberg at the Borough Polytechnic at this time were of greater significance. 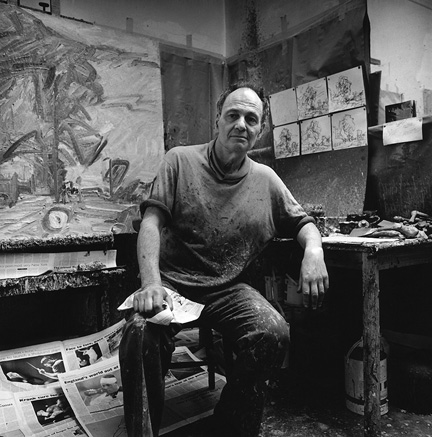 He formed lasting friendships with, among others, Francis Bacon, Lucian Freud, and Leon Kossoff. These are all painters with a desire to represent their response to observed reality and who found much inspiration in the paintings of the National Gallery. In 1976, the American-born painter R. B. Kitaj referred to these artists as a ‘herd of loners’ and put forward the much debated idea of a School of London, although this was a term rejected by the artists themselves.

In 1995 Auerbach was invited to show his versions of National Gallery paintings in the Gallery’s Sunley Room, together with a selection from the many hundreds of drawings he had made in front of the paintings, a practice he began in his student years. Some of these drawings are now on display in the Espresso Bar, a gift from James and Clare Kirkman.