Raphael’s famous Madonna of the Pinks remained well known as an autograph work right into the 19th century. But by the second half of the century its status had changed to that of a copy, until close visual examination identified several pentimenti. Infrared reflectography revealed an underdrawing characteristic of the artist, and good lighting showed off its fine quality. Subsequent investigations have confirmed the painting’s status as an original work by Raphael. 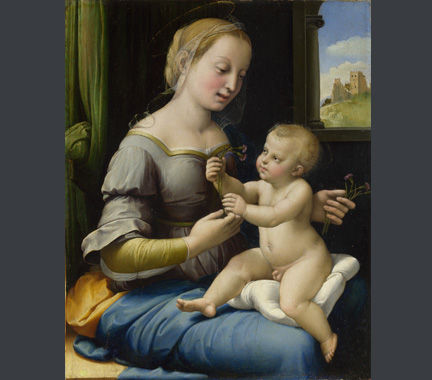 To judge from the numerous 16th- and 17th-century painted copies, not to mention several reproductive prints, Raphael’s ‘The Madonna of the Pinks’ has always been famous. In the early 19th century, the painting was one of the highlights of the Camuccini collection in Rome.

It continued to be esteemed when acquired, along with the rest of the Camuccini collection, by Algernon, 4th Duke of Northumberland in 1853. The Duke gave ‘The Madonna of the Pinks’ a splendid Renaissance revival frame designed by Giovanni Montiroli (which will be displayed beside the picture for the duration of the National Gallery exhibition Close Examination: Fakes, Mistakes and Discoveries). Yet during the second half of the 19th century the painting’s fame declined, especially after 1860 when the Raphael scholar Johann David Passavant denounced it as a copy.

For most of the 20th century the picture remained unappreciated in a corridor at Alnwick Castle, the seat of the Duke of Northumberland. Then, on a visit to the castle in 1991, Gallery curator Nicholas Penny was struck by a pentimento where the landscape runs through the tower in the background. Such an alteration would be highly unusual in a copy. The painting was brought to London for examination. In the optimal light of the conservation studio and with the aid of an infrared reflectogram, the work’s exceptional quality became apparent. 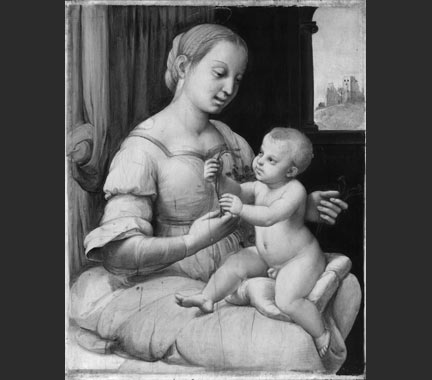 The picture had a distinct chance of being by Raphael. The remarkably free underdrawing revealed by the infrared reflectogram bore close resemblance to his graphic work, as well as to the underdrawing of his Florentine works such as the ‘Small Cowper Madonna’ in the National Gallery of Art, Washington, D.C. The panel was identified as the ‘lost’ Raphael in an article in ‘The Burlington Magazine’ in 1992 and the attribution has subsequently been accepted by most scholars.

In 2002 the Duke announced his intention to sell the picture and the National Gallery mounted a campaign to acquire it. As the attention of the press mounted, detractors sought to deny Raphael’s authorship. The Gallery’s scientific, conservation and curatorial departments undertook further research to establish the picture’s attribution and authenticity even more definitively.

As the painting was not the Gallery’s property, no paint samples could be taken. Luckily, however, the panel was small enough to be examined under the microscope, so certain pigments could be identified and related to Raphael’s known work. The Virgin’s grey-mauve chemise, for example, contains a red lake pigment mixed with natural azurite and white, with some black in the shadows – a combination that frequently occurs in early works by Raphael. 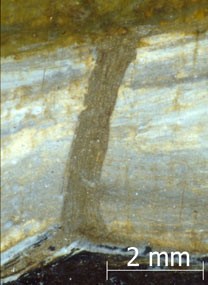 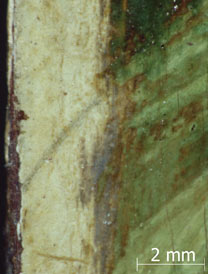 Photomicrograph of the upper left edge, showing trace of metalpoint underdrawing over imprimatura, and original mauve colour of green curtain

An unusual dark grey pigment on the Virgin’s sleeve was identified as powdered metallic bismuth, which was also used in The Ansidei Madonna and The Procession to Calvary – both in the National Gallery. The green curtain in ‘The Madonna of the Pinks’ was observed to have originally been painted as mauve (a change that would not have been made in a copy).

Since the acquisition in 2004, samples have been taken from the very edges of the composition, which are hidden by the frame. These have confirmed the presence of lead-tin yellow pigment and identified the binding medium as heat-bodied walnut oil, which might have aided drying. The samples have also established that the painting is underdrawn with a metalpoint composed of lead and tin, the same used in The Garvagh Madonna in the National Gallery. The imprimatura was found to be a mixture of lead white, a small amount of lead-tin yellow and powdered soda-lime glass containing manganese, a combination that is characteristically seen in Raphael’s early panels. The wood panel has recently been analysed and found to be yew.

A. Roy, ‘The Re-emergence of Raphael’s “Madonna of the Pinks”’, ‘Raphael’s Painting Technique: Working Practices Before Rome’ (Proceedings of the Eu-ARTECH workshop), eds A. Roy and M. Spring, Florence 2007, pp. 87–92