Before the cleaning of 1995–6, the appearance of NG1888 was so altered by the overpaint and by the varnish that no accurate assessment of its quality was possible. In the Beaucousin collection, it was described as ‘by Flamming’ (perhaps meaning ‘Maître flamand’, Flemish master?).14 Wornum described it in his diary on 25 January 1860 as ‘Mabuse’ but then struck out the word; on 15 June 1860, he described it as ‘School of Mabuse?’.15 Similarly Eastlake, writing to George Mulvany, future Director of the National Gallery of Ireland, called it ‘Flemish School’ (29 April 1860) and ‘School of Mabuse’ (12 June 1860).16 In Dublin in 1867 it was catalogued as by Gossart,17 in 1898 as ‘School of Gossaert’; in London in 1929 as ‘After Mabuse’ and in 1945–68 as ‘a late copy’ after Gossart, ‘perhaps of the seventeenth century’.18 After cleaning, it was published in 1996 by Campbell and Dunkerton as an original by Gossart.19 In 2010, however, Ainsworth called NG1888 a copy and suggested that the Vienna version, previously disregarded, was probably the original, or the one closest to the original.20

The Munich version, apparently signed and dated 1527, has also been taken to be the original from which all the other versions are taken.21 The ‘signature’, however, must be false; it may have been copied from the lost frame of the original.22 The underdrawing of the Munich version is schematic and very similar to the underdrawing of the version formerly in the collection of Baron Descamps.23 Both underdrawings may have been transferred from the same tracing in the same workshop: for some reason, the Descamps version was inscribed, correctly: IOANNES MALBODIVS INVENIT 1527, while the Munich version was inscribed, falsely: IOANNES MALBODIVS PINGEBAT 1527.

The London version is authenticated by the engraving dated 1589 by Crispijn de Passe the Elder (fig.4). The engraving was certainly based on NG1888: in the other versions, the Child’s right arm is differently positioned, the Child’s head contrasts in type and expression, and the ring finger of the Virgin’s left hand is twisted into a rather inelegant contortion. The inscription on the engraving: ‘after that distinguished panel painted by John of Maubeuge’, provides good evidence that the London panel is Gossart’s original. The delicacy of the brushwork, the skill of the drawing and the subtlety of the colour fully support this conclusion. The underdrawing, moreover, shows the painter working out areas of his composition on the panel itself.24

Ainsworth noted that in the Vienna version too the painter had worked out details of the architecture on the panel itself (fig.8). She found ‘considerable use of ruled lines’ but also ‘more loosely drawn contours and shifts from the preliminary design at the lower right columnar base’.25 There is ‘a small amount of freer pen work at the lower left of the Virgin’s draperies, where corrective drawing appears to be over rather than beneath the dense, opaque paint’; and, Ainsworth observed, ‘The grotesque head and flourishes on the footstool support are quite freely drawn in a confident hand’.26 This ‘confidence’ might be described as a rather naïve boldness. 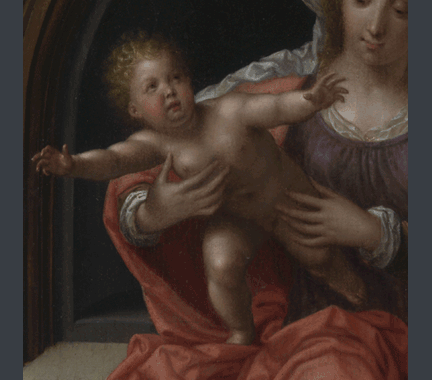 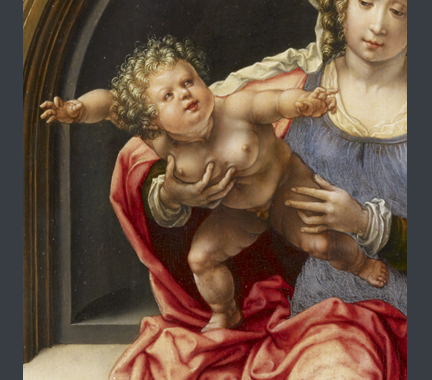 The Vienna Child’s grimacing head, his obese torso and the way in which his right arm appears to spring from his skull provide further evidence of the Vienna painter’s inability to imitate Nature – or Gossart (figs.17, 18). Ainsworth noted that in the Vienna version, and also in the Munich and Descamps versions but most notably in the Vienna picture, ‘the Virgin’s right hand cups the seemingly engorged right breast of the Christ Child’ and observed that this motif, as Caroline Walker Bynum had suggested, might refer to ‘Jesus as Mother’.27 Ainsworth concluded that the artist of the London picture had failed to understand the full meaning of this important reference.

In the Vienna picture the modelling is hard and laboured: the hair of the Virgin and Child looks like metal wire; areas of light and shadow in the flesh, draperies and elsewhere are demarcated with schematic harshness. This is particularly obvious in the letters of the inscription and the shadows cast by them. They are oversimplified in tone and unnaturally sharp (fig.19); whereas in NG1888 they are a triumph of imaginative reconstruction of the fall of light and shadow over convex metal and concave wood (see fig.20 below, and photomicrographs m22 – m28 in Image Viewer).

fig.20 Detail from NG1888, lettering in the inscription
View enlargement in Image Viewer

fig.19 Detail from fig.3, lettering in the inscription © KHM, Vienna

Ainsworth may have had a poor reproduction in front of her when she claimed that ‘The London version consistently shows soft and blurred modeling’. The Vienna painting, she argued, ‘reflects Gossart’s characteristically meticulous brushwork and polished flesh tones’. In fact the Vienna ‘Virgin and Child’ could be a copy by one of Gossart’s imitators. The London ‘Virgin and Child’ may be compared with the half-length ‘Virgin and Child’ in the Prado, although the figures there are very much larger in scale. The delicacy, not always sharply focused, of the London picture recurs in the ‘Young Princess’, NG2211.

The versions may not all have been taken directly from the original. Indeed the Vienna version shows the Virgin wearing a blue, rather than a purplish, dress. In both the Munich and Descamps versions, the Virgin’s dress seems once to have been purplish but the smalt in the mixtures has caused it to discolour. The Vienna, Munich and Descamps versions show the ring finger of the Virgin’s left hand bent into an uncomfortable, if not an impossible, shape and in all three the Child has a fat and shining face – the Vienna Child being the fattest and shiniest of the three. They may well derive from the same copy or tracing; the different positions of the Child’s left arm may have been deliberately chosen (or the tracings may have slipped). The change in the colour of the Virgin’s dress may result from the first copyist’s inability to match the subtlety of Gossart’s mixture of red lake, charcoal black and white; or the Vienna copyist may have chosen to clothe the Virgin in traditional blue.

The date 1527 found on the Munich and Descamps versions may well have been copied from the lost original frame of NG1888. The same date is on Gossart’s ‘Danaë’ (Munich), where the figure is on a much larger scale, and on many of the versions of the lost ‘Christ on the Cold Stone’.28

14. List of the Beaucousin pictures, drawn up when they were packed in Paris, cited by Campbell and Dunkerton 1996, p. 165 note 9.

27. Ainsworth was here citing and enlarging upon Caroline Walker Bynum’s discussion of the composition in her ‘Fragmentation and Redemption, Essays on Gender and the Human Body in Medieval Religion’, New York 1991. Bynum illustrated the Munich version (p. 213 [Fig. 6.9]), which Ainsworth dismissed, with the London painting, as failing to demonstrate ‘the full meaning of the representation’. Bynum observed (p. 206) that the ‘motif of “Jesus as mother” may also help to explain the unusual northern Renaissance paintings by Jan Gossaert that depict the infant Christ with engorged breasts’. She continued, however (p. 381 note 88): ‘Perhaps one should not seek a Christological explanation for this iconographic emphasis, since Gossaert appears in at least one place to represent “putti” with engorged breasts.’ She cited the babies in the architecture of the wing panels of ‘Saint John the Baptist and Saint Peter’, dated 1521 (Toledo, Ohio). Ainsworth, discussing the Toledo panels (in Ainsworth et al. 2010, pp. 195–9), did not mention the breasts of these ‘putti’, which are very prominent – though not so large as those of the Vienna Child. Bynum finally concluded that, since Gossart ‘shared the late medieval-Renaissance fascination with hermaphrodites’, his ‘hermaphroditic infants may reflect this interest or may indeed simply be Mannerist efforts to shock’.