The picture was surface cleaned and its ‘perished’ varnish was ‘revived’ in 1926, on its return from Dublin. Cleaned in 1995–6, it was revealed to be in very good condition.4 Before 1995, the painted surface was disfigured by overpaint and obscured by a very thick layer of degraded varnish, probably applied in the mid-nineteenth century before the picture was acquired by Beaucousin. There are a few pinhead-sized losses in the upper part of the painting and some small flake losses near the lower edge.5 The modelling of the Virgin’s face is a little rubbed. The lower sleeve on her left arm was originally deep maroon-purple, with pink highlights, but because the medium has discoloured the shadows now appear to be dull greenish-brown.

The panel is a single board of oak, vertical in grain. It is painted up to the edges on all four sides. It has been thinned to 2 mm (measured at the centre of the bottom edge) and has been cradled. What remains of a bevel following the curve of the arched top is visible on the reverse. The cradle is of soft wood and comprises five vertical and five horizontal elements. Dendrochronological investigation has established that the panel is Baltic oak and that the 180 growth rings were formed between 1313 and 1492.6 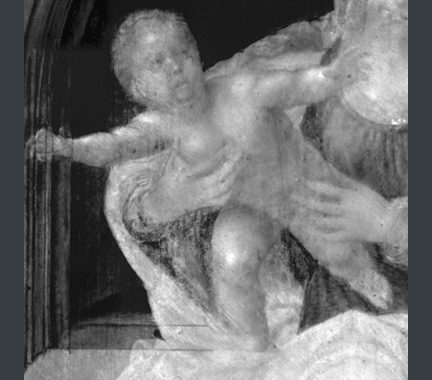 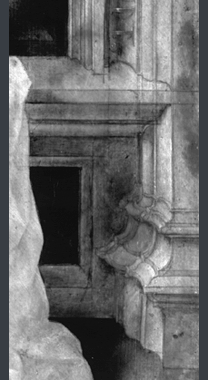 fig.6 Infrared reflectogram mosaic of NG1888, architecture near the bottom on the right.
View enlargement in Image Viewer

The ground is chalk, probably bound in animal glue, and is covered by a pinkish-grey priming (mixed from lead white, charcoal black and some fine particles of an opaque red pigment).7 A certain amount of underdrawing is visible with the aid of infrared imaging techniques. In the figures, the simple and linear drawing consists of a few marks and flourishes (fig.5), the lines appearing broken as they skip over the texture of the priming. The underdrawing for the architecture is more extensive: straight lines have been ruled with the help of a straight edge and often extend further than is necessary (See fig.6 left, and photomicrograph m18 in Image Viewer), and some of the arcs have been lightly incised. Compasses were used to mark out the main arcs of the fictive frame, both at the underdrawing stage and afterwards to incise clean arcs into the wet paint. The repeated use of the same central point has punctured the paint and ground in the middle of the Virgin’s neckline. The hole has been filled and disguised with the crossed ends of the drawstrings of the Virgin’s chemise (fig.7).8 No unusual pigments have been identified but there are some distinctive mixtures and juxtapositions. The Virgin’s red mantle has modelled opaque-pink underlayers, containing lead white, vermilion and red lake, onto which an extremely thin red lake glaze has been applied.9 The subtle purple-red colour of the paint of the Virgin’s dress is made from a mixture of red lake, lead white and coarsely-ground wood charcoal, with only a little blue pigment (azurite) present, mainly in the highlights.10 The shadows of her lower sleeve contain mainly azurite with some red lake and must therefore once have been a deep maroon-purple; discoloration of the medium has given them a greenish cast (fig.8).11 The highlights are pink, mixed from lead white and vermilion. The medium has been identified as heat-bodied linseed oil in a sample from the grey moulding near the right edge.12 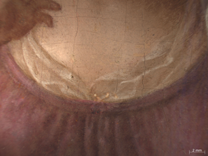 fig.7 Photomicrograph of NG1888 showing the Virgin’s neckline with damage caused by the use of compasses to draw the architecture
View enlargement in Image Viewer 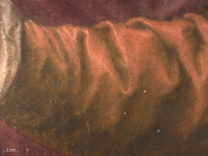 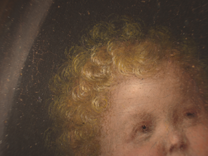 The delicacy of handling in such details as the Child’s head (figs.9, 11) and the fingernails of his right hand (fig.10) shows extraordinary skill (fig. 7). The richness of colour, achieved with a very restricted number of pigments, is also astonishing. Only a painter of enormous skill could have rendered the convex gilded letters of the inscription and the shadows that they cast across the concave wooden moulding behind (see fig.12 below, and photomicrographs m22 – m28 in Image
Viewer). 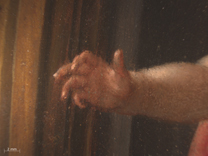 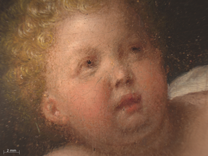 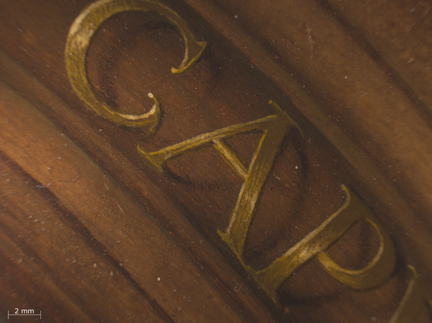 4. Campbell and Dunkerton 1996, pp. 165–72 for Dunkerton’s report on her cleaning and on the physical state of the picture.

7. Chalk (calcium carbonate) was confirmed by SEM–EDX analysis. The pigments in the priming layer were identified by examination of a cross-section of a paint sample under the optical microscope (note from M. Spring in the Scientific Department file dated January 1995).

12. Report in the Scientific Department file by R. White and J. Pilc dated 21 November 1995. The medium was identified by GC–MS analysis and FTIR microscopy.