The picture was exhibited in 1882 and 1907 as a portrait of ‘Jacqueline de Bourgogne’. In 1908 Hulin proposed that Jacqueline was Jacoba (Jacqueline), daughter of Adolf of Burgundy, Lord of Veere.20 This identification was tentatively accepted by Davies but rejected by Smith.21 Sterk identified the sitter as Isabella of Portugal, the future wife of the Emperor Charles V.22

The old identification of the sitter as Jacqueline de Bourgogne may reflect a tradition established when the picture was still in France. If that is the case it may carry no more authority than the old attribution to Leonardo and may even be a confused reference to Jacqueline of Bavaria (1401–1436), Countess of Hainault and Holland. On the other hand Adolf of Burgundy was a patron of Gossart23 and did indeed have a daughter named Jacoba. Born on 3 November 1523, she married as her first husband in December 1541 Jan of Flanders, son of the Lord of Praet, near Bruges; he died in 1545 and she married as her second husband in 1549 Jan, Lord of Kruiningen, Burgrave of Zeeland. She died in 1556.24 No portrait of her has been discovered. She was eight when Gossart died, probably too young to be the sitter here; and, though her father was a rich and powerful nobleman, it seems unlikely that his daughter would ever have dressed as magnificently as the girl with the armillary sphere.25

The magnificence of her dress would be more in keeping with Sterk's theory that she is Isabella of Portugal (1503–1539), who married Charles V in 1526. He argued that the armillary sphere was used as an emblem by her father Emanuel, King of Portugal (died 1521); and that she looks like later portraits of Isabella. The armillary sphere is frequently found in association with King Emanuel's coat of arms in manuscripts produced for him.26 It was used as an emblem by other members of the Portuguese royal family, as well as by unrelated persons in different countries.27 There is no reason to believe that Isabella would have been painted holding her family emblem upside down. The portrait was executed in about 1530, when Isabella was 27 – very much older that the sitter here. Isabella never left the Iberian peninsula and there is no evidence that Gossart ever painted her portrait. If he did, he would have had to base his work on a likeness by another artist. The sitter's clothes and jewellery are not in the Portuguese style. Though there is some resemblance between her and Isabella, the identification as Isabella may be dismissed.

The child represented, who seems to be about nine or 10 years old, must be of the highest rank. Her clothes, sewn with hundreds of pearls, are very much more splendid than those of the princesses of France drawn or painted by Jean Clouet in the 1520s;28 but Eleonora of Austria, Queen of France, is attired with comparable magnificence in portraits of around 1530.29 The only young girls who, in the Low Countries in about 1530, might have appeared so richly dressed were the daughters of King Christian of Denmark, Dorothea and Christina. They resided at the courts of Margaret of Austria and Mary of Hungary; both Margaret and Charles V gave them enormous quantities of jewellery including huge numbers of pearls.30 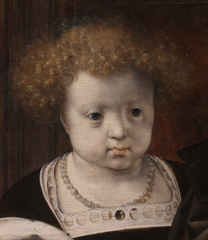 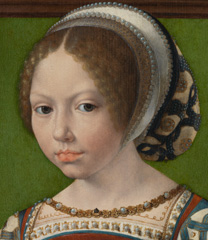 Gossart painted the two sisters with their brother in a triple portrait (Royal Collection) which was probably executed shortly after their mother's death in January 1526.31 The child on the left in this portrait is Dorothea, who, born on 10 November 1520, would then have been five (fig.25). With her high forehead, widely spaced greenish-grey eyes, irregularly shaped eyebrows, bowed upper lip, wide lower lip, slightly receding cleft chin and frizzy golden hair, she bears a marked resemblance to the sitter in NG2211 (fig.26), who may well be the same child, five years older. There is also general agreement between the features of the child in NG2211 and those in later likenesses of Dorothea, for example portraits painted in Germany in about 1536 (fig.27) and 154532 or an even later portrait, from the time of her widowhood (1566–80), in the Ambras series of miniature portraits (fig.28).33 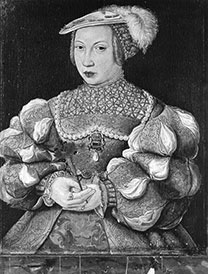 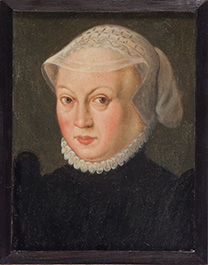 The child in NG2211 points purposefully at her armillary sphere. The sphere itself, unusually small, is peculiar in its construction, which might suggest that the artist did not have a real armillary sphere in front of him but had to work from a print. Gossart's daughter, however, married between 1525 and 1532 the painter Hendrik van der Heyden, whose uncle Gaspar van der Heyden (c.1495 – before 1561) was a goldsmith, and from 1527 to 1529 was involved in the manufacture of globes and worked with the geographers Gemma Frisius and Gerard Mercator.34 It is unlikely that Gossart did not know what armillary spheres looked like or how they were used. If the painted sphere is strangely constructed, then Gossart has made it so deliberately – perhaps to accommodate his anagram, perhaps also to allow the child to make a specific gesture. She may be treating it as an expensive toy, she is after all holding it upside down, but it is conceivable that the sphere and her gesture can be interpreted in political terms. Neither Dorothea nor her father Christian II of Denmark are known to have used the armillary sphere as an emblem but the child depicted here is indicating on the outer ring of her sphere a point approximately 55° north of the equator. The latitude of Copenhagen is 56° north; the child may be directing our attention to her father's lost kingdoms; the sphere, and the world, may be upside down because of the political disturbances which drove him and his family out of Scandinavia. Such points could have been made more obviously if Gossart had included a terrestrial globe rather than an armillary sphere, but that might have disturbed the balance of his composition and it may not have been his intention to make points too obviously.

Frederick II, Elector, Palatine, with on one side the arms of the Palatinate with the Golden Fleece; painted on panel by Johann Malbodius or Jean de Moabeuse.

The wife of the same Frederick II by the same painter.35

As Gossart died in 1532 and as Dorothea did not marry until 1535, these portraits must have been painted before their marriage and did not necessarily form a pair. Frederick (1482–1556) was made a Knight of the Golden Fleece in 1516. Heidelberg was sacked by the French in 1689. The portrait of Dorothea might have been taken to France; the inscriptions on the reverse of NG2211 show that it was in France in about 1800.

Dorothea of Denmark, born in November 1520, was the elder daughter of Christian II and Isabella of Austria and the sister of Christina, Duchess of Milan and Lorraine, whose portrait by Holbein is in the National Gallery (NG2475). Brought to the Low Countries in 1523 when her father was deposed, Dorothea was educated at the courts of Margaret of Austria and Mary of Hungary. She married in 1535 the Count Palatine Frederick II, who succeeded as Elector Palatine in 1544 and died in 1556. She died, childless, in 1580.38

Although Gossart's portrait has lost some of its opulence of colour, it remains a most arresting image, full of contrived contradictions. The painted frame appears to be in the same plane as the real frame but is overlapped by the child, who is projected towards the spectator, in front of the frame. Very richly dressed, she seems to be playing with an armillary sphere, yet it is not an ordinary armillary sphere and she may know exactly what it is. She may be using it to make a political point. If she is indeed Dorothea of Denmark, the portrait may have been commissioned by Margaret of Austria or another of the Habsburgs, for whom Gossart often worked. It was conceivably the portrait by Gossart which Dorothea took with her to the Palatinate and which was at Heidelberg in 1685.