The portrait must have been cleaned several times before coming to the National Gallery and at least one of those early cleanings was rather drastic. It was cleaned at the Gallery in 2009–10, when disfiguring retouchings were removed. Though there is only one significant loss, of paint and ground, from the fingers of the child’s left hand, there is abrasion in the green glazes in the background, the darker areas of the hair, parts of her garments and the armillary sphere, including the inscription. The blue parts of her sleeves and her snood should be purple: the red lake component has faded. The original colour can still be seen at the lower edge, where it has been protected by frames (figs.3, 4). 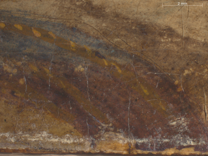 fig.3 Photomicrograph of NG2211 showing the bottom edge where purple of dress has been protected from fading
View enlargement in Image Viewer 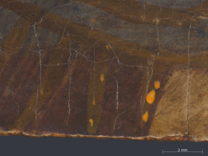 fig.4 Photomicrograph of NG2211 showing the bottom edge where purple of dress has been protected from fading
View enlargement in Image Viewer

The panel is one board of oak, vertical in grain and radially cut. There is a very slight convex twisted warp. Dendrochronological investigation has established that the wood is Baltic oak and that the 147 growth rings were formed between 1357 and 1503.8 The panel is about 9 mm thick in the centre but the back is steeply chamfered on all four sides to a thickness of 2 mm at the edges (measured in the middle of the lower edge). An old split towards the centre of the lower edge has been repaired. On the reverse (fig.2) are inscriptions written in ink: along the top edge: ‘Leonard De Vins[y?]...’ (fig.5); and, sideways up the right edge: ‘peint par Leonard De Vinsy premier/peintre De francois premier’. Beneath the first inscription is another, almost totally effaced and completely illegible (fig.6). The number 271 is written in black ink across the middle; at the top are the remains of a stencil, 4 N(?) D.

fig.6 Detail from fig.2 showing inscription down right side of the reverse
View enlargement in Image Viewer 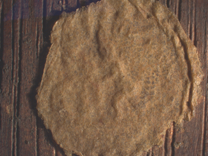 fig.7 Photomicrograph of NG2211 showing a paper seal on the reverse
View enlargement in Image Viewer

Also on the reverse, on paper labels, are the numbers 82(4?)0 and 242, and several round objects, apparently paper seals, some partially removed, others bearing traces of embossed designs (fig.7).

The ground is chalk, probably bound in animal glue, and is covered with a lead-white priming. Both ground and paint continue to the edges of the support: the portrait may originally have had unpainted edges which have been trimmed away but the steep chamfers at the back suggest that it was painted out of its frame. A vertical disturbance of the paint near the left edge seems to indicate that when the paint of the child's right sleeve was still soft the panel was fitted into a frame that was subsequently removed. 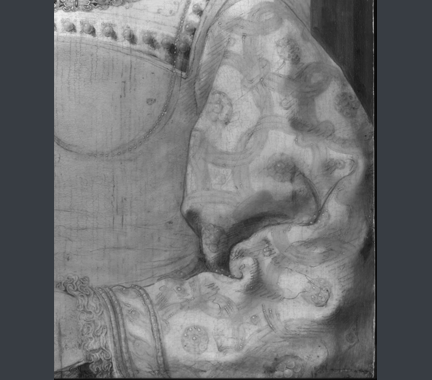 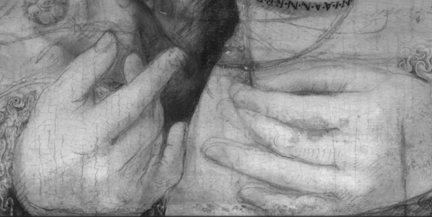 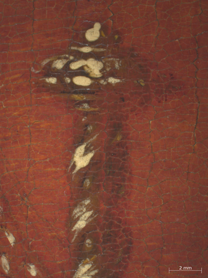 fig.10 Photomicrograph of NG2211 showing the handle of the armillary sphere
View enlargement in Image Viewer

Some of the lines of the fictive frame are incised. Extensive freehand underdrawing is visible in places where the paint, over time, has become more transparent. The underdrawing is more completely visible when infrared imaging techniques are used. The underdrawing has been applied over the priming; the lines appear rather broken in reflectograms but they are probably in a liquid material. Very little drawing can be seen in the face, apart from the positions of the eyes and the outline of the profile, which was moved slightly during painting. The hands and clothing are much more extensively and freely drawn, with hatching, often rather scribbled, to indicate areas of shadow (fig.8). There are minor changes in both hands: the middle finger of the left hand is drawn straighter and the ring finger of the same hand is shorter in the drawing (fig.9). The drawing in the sleeves indicates folds and shadows, not always followed in the final painting. Here Gossart appears to concentrate on the structure of the clothes rather than on the decorative patterns and jewels, which do not seem to be underdrawn. The armillary sphere may be roughly outlined over indications for shadows in the dress but it is painted without a reserve on top of the dress (fig.10). There are changes, difficult to interpret, in the snood, where some of the pearls are painted on top of the glaze on the background.

The blue parts of the sleeve are painted with mixtures of azurite and red lake and were originally purple. The red bodice has a dark orange-red underpaint containing mixtures of red lake, red earth, black and white, covered with a faded, red lake glaze. The sleeves are modelled with various mixtures of white, black and orange-red earth.9 The medium was analysed in one sample, from translucent red lake-containing paint on the red bodice, and was found to be linseed oil; it had not been heat-bodied. Some resin, probably pine-resin, was detected as an addition to the oil.10

When the green background is examined under a stereomicroscope, there appear to be darker green parallel lines on top of a lighter green underpaint (See fig.11 below, and photomicrograph m25 in Image Viewer). If this is examined more closely, a strong texture becomes evident at the surface of the underpaint. It was perhaps made by a tool such as a stiff (hog-hair?) brush used to even-out the paint. Where the thin verdigris glaze is rather worn, it remains only in the depressions and creates the effect now seen on the painting. In certain areas, for example the catchlights of the sitter's left eye, the paint has been dragged and feathered (fig.12, and photomicrograph m3 in Image Viewer). The last restorer had to take ‘great care … to imitate the thinness of the original technique, with its slight softening of detail typical of Gossaert’s late works. This was especially important when retouching the abraded pearl brooches since, under magnification, it can be seen that the painter sometimes blotted his paint to soften the edges’ (fig.13).11 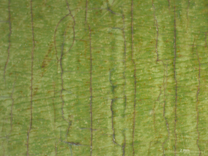 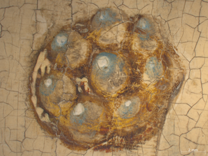 fig.13 Photomicrograph of NG2211 showing a group of pearls on the right sleeve
View enlargement in Image Viewer 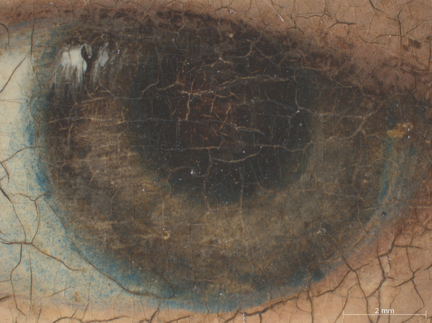 11. Report of 9 June 2010 by Jill Dunkerton in the Conservation dossier.