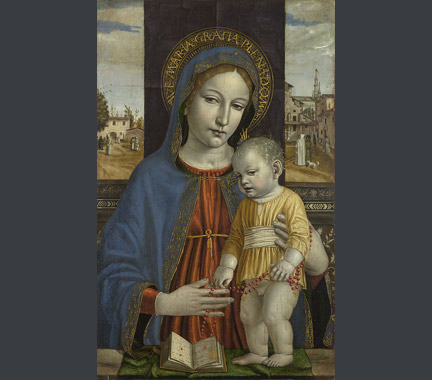 Ambrogio Bergognone spent over five years working at the Certosa (Charterhouse) at Pavia in Lombardy, the building complex represented in the background of this small ‘Virgin and Child’. Bergognone’s picture, which may have been made for a monk at the Charterhouse, is a very rare example of a painting which not only documents an actual place, but also a specific stage in the construction of a building. We can see parts of the façade and transept of this great monastic church, as well as some of the other buildings on the site (visible to the left of the Virgin). Several Carthusian monks are included within this realistic scene, one of whom seems to be observing the building works.

Many scholars date the ‘Virgin and Child’ to between 1488 and 1490, on the basis of Bergognone’s documented presence at the Certosa, and the known building phases of the church’s façade.1 According to Albertini Ottolenghi, Bergognone is first recorded at the Certosa on 28 February 1489,2 although it is possible that he had been working at the monastery since the second half of 1488. His extensive work at the Certosa consists of two polyptychs for the altars of the church, four altarpieces documented in 1490 (including the National Gallery’s 'Virgin and Child with Saints', fig. 1), and four more, recorded in 1491 and between 1492 and 1494. 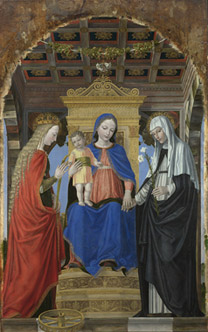 In addition, he began the fresco decoration of the church.3 Laura de Fanti’s 1998 catalogue entry on the ‘Virgin and Child’ summarises the painting’s history, and its place in Bergognone’s oeuvre.4

We have no documentary evidence for the painting’s original location or the circumstances of its commission. Nevertheless, its dimensions seem to exclude its placement on an altar, rather suggesting a devotional use in another part of the monastery, as in the case of the ‘Madonna del Certosino’ (Brera, Milan). Another possibility is that ‘The Virgin and Child’ was made for a lay person who had a particular devotional connection with the Certosa. Certainly, some link with the Charterhouse is suggested by the presence of the church itself. The Certosa at Pavia was dedicated to Santa Maria delle Grazie, and within the monastery devotion to the Virgin Mary was widespread.

Bergogone’s picture is one of only a few paintings in the National Gallery’s Italian Renaissance collection to show a real place (another is Portrait of a Man in Armour). It is very interesting to compare the existing building with Bergognone’s representation of it. The two lowest levels of the façade, containing ‘tondi’ with emperors’ profiles and reliefs from the New Testament, are clearly visible in their completed form in Bergogone’s painting, yet the rest of the structure is shown without the marble revetment we see today. The rough wall, the wooden structures under the roof and the large buttresses dividing the wall into three parts (corresponding to the internal nave, the aisles and the lateral chapels) are also visible. A temporary roof protects the new work on the building.

In Bergognone’s painting, the structure of the façade differs in several aspects to the one we see today. It depicts only one tall window opening in the wall, instead of two smaller ones, and probably shows the scheme for the external decoration of the Certosa which was begun in 1473–4, and then modified, perhaps in 1491, when a new contract was made between the Carthusians and Giovanni Antonio Amadeo, Antonio Mantegazza and Antonio Della Porta, called Tamagnino.5 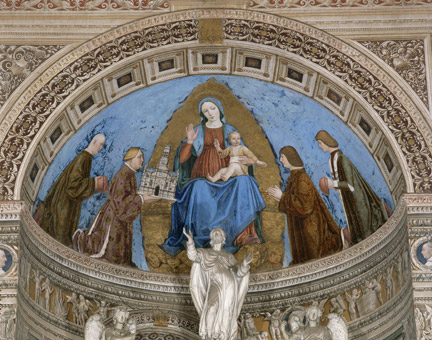 This earlier project also appears in Bergognone’s fresco for the right transept of the Certosa, ‘Gian Galeazzo Visconti offers the Model of the Certosa to the Virgin and Child’ (fig. 2). In this fresco, the façade of the church is shown complete. Borlini has pointed out that the two rows of arcades above the central oculus (the lower one not yet built, and the upper one modified later, but located at the same height as in the actual façade) appear in the ‘Virgin and Child’ and in Benedetto Briosco’s ‘The Consecration of the Certosa’ (fig. 3). This sculptural relief was made for the door of the Certosa between 1501 and 1506, but it illustrates an event that took place several years earlier, in 1497.6 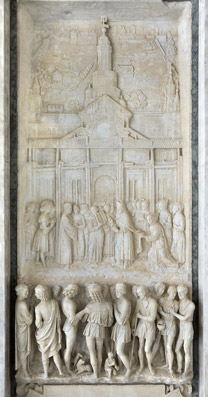 In Bergognone and Briosco’s representations of the Certosa the two arcades (which can be seen on the right side of the second and third levels of the façade) are at the end of the existing lateral arcades, constructed along the two sides of the naves. These allow the illumination of the interior of the church through a series of openings at the top of the nave and aisles, just like the ones shown by Bergognone and Briosco over the tall windows of the façade. The depiction of the church in Briosco’s relief is subtly different from the way it is represented in the National Gallery’s ‘Virgin and Child’. For instance, the windows on the first level of the façade have changed, and now resemble those on the building as it appears today. A further painting by Bergognone, ‘Christ Carrying the Cross’ (Musei Civici, Pavia), dating from the period of the consecration of the Certosa, also depicts the church’s first-level windows as they appear in Briosco’s sculpture.

The ‘Virgin and Child’ is a good example of Bergognone’s architectural interests. He was particularly concerned to represent buildings precisely and accurately. His multiple depictions of the Certosa show the building’s façade at several different historical moments. During his career he often set narratives in architectural spaces which not only look real, but which also – as in the case of the Certosa – respond to a real structure. Bergognone was highly sensitive to the architectural innovations of his time,7 and on occasions his painted buildings seem to anticipate future architectural developments in Lombardy.8