5. Interiors: the picture as a room

An entirely different approach is revealed in paintings of interiors. Although entry strategies and perspectival axes still apply, some artists were investigating how to paint interiors in a way that would convey their confined spaces, their special light and air, and how that in turn affected interpretation of the narrative and the work. The construction of a painting as a perspectival box lent itself to room making, and in some senses a painting is a room. Enclosure produces focus, intimacy and emotional intensity. Artists like Carpaccio and Ercole de’ Roberti discovered how depicting an interior could help to convey a heightened sense of domesticity or religiosity. The room, like the arch, the loggia or the façade-less building, provides privileged access to a saint’s (or heroine’s) life.

Painters selected their viewpoint according to the scale, physical context, subject matter, or mood required. While a cutaway or cross-section type of painting mapped the structure of a whole building, looking into it from a distance, such a picture could not represent the atmosphere of a room or what it was like to be inside. From the 1420s Gentile da Fabriano (fig. 38) and Fra Angelico had begun to explore a different type of interior that gave the spectator an impression of being within or on the very threshold of indoor space, witnessing or participating in whatever was going on there. 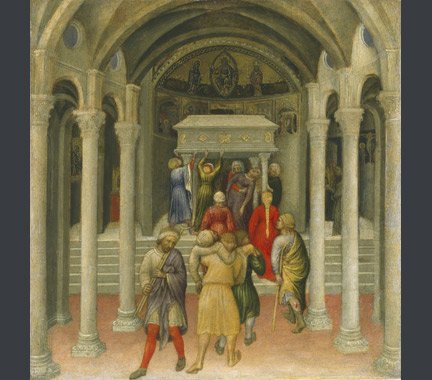 One fundamental concern was the framing of the image, a second was scale and a third viewpoint. By structuring the entrance threshold the spectator was conceded a viewing point either at a distance, or just outside the room, or was admitted to a place within the room. 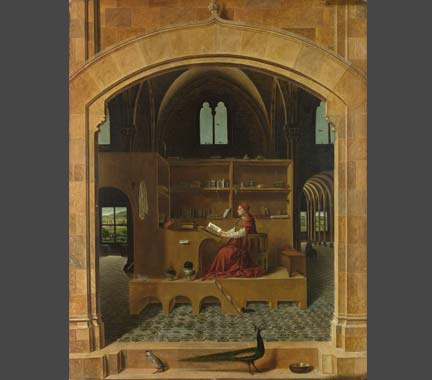 In Antonello’s ‘Saint Jerome in his Study’ (fig. 39) the spectator is left outside to peer into the inner spaces of Saint Jerome’s scholarly world. It is the outer arch and ledge which initially create this visual, spatial and emotional distance between us and the learned saint. The miniature scale of the figure and his surroundings increases that sense of distance. And the fact that we look down on him and his strange study-church from a height creates a bird’s-eye view, which makes us feel even further away. 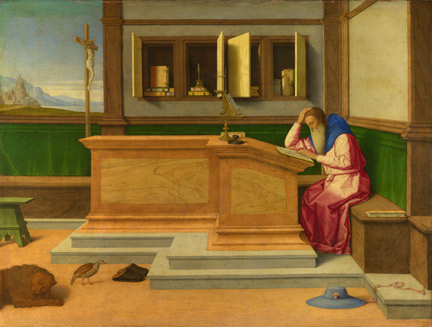 In contrast, in Vincenzo Catena’s painting of the same subject (fig. 40) the complete lack of framing or distancing devices means that we are allowed to share the saint’s study.30 Catena’s is a truly habitable image, with a spacious, open, empty area at the front, like a lobby awaiting the viewer’s entry. Since there are no preliminaries, no threshold over which we need to step, it is as though we are already in the picture. All the structures within the image are designed to welcome us: the L-shape of the desk opens towards us with its inviting steps, the end of Saint Jerome’s bench nearest the viewer is empty as though we are to join him there, the cupboards are open, as is the window beyond. Even the lion is sleeping like a pet. This may have been intended as part of a visual metaphor for the accessibility of Christian doctrine brought about by Saint Jerome’s translation of the Bible from Greek into Latin.31 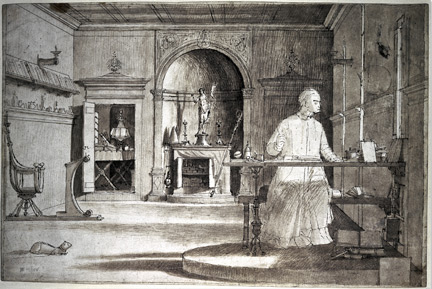 Catena would also have been inspired by Vittore Carpaccio's eloquent depiction of rooms: their architecture, domestic accoutrements, lived-in feel, space and light. In the preparatory drawing for his ‘Vision of Saint Augustine’ in the Scuola di San Giorgio degli Schiavoni, Venice,32 Carpaccio presents a sensitively imagined and meticulous rendition of an interior (fig. 41). This is a room that would stand with or without its inhabitant. The drawing conveys a heightened sense of the chamber – its walls, floor, ceiling, contents, its light and air. Although its architectural features are finely conceived, with an apsidal niche framing the altar and doorways with prominent lintels comprised of entablatures, pyramidal crests, vases and palmettes, it is the creation of a room as a self-sufficient entity with its own interior atmosphere which makes this drawing remarkable.

The atmosphere is created with wash and areas left blank for the white paper to shine through, which achieves a subtle play of light and shade. There are different levels of grey in the base wash: darker grey on the right wall, mid-grey on the back wall, and very pale grey for the left wall onto which light streams from the windows. Over this grey wash Carpaccio applied broad hatching to create darker and lighter shadows across the room. The curtain in front of the altar is entirely drawn with brush and wash, not line, in a highly suggestive treatment of the soft cloth, clearly differentiated from the crisp use of pen for stone architectural mouldings. The two capitals are treated differently, the left one in the light is more sharply and heavily drawn, the right-hand capital is more softly and summarily drawn to suggest the shadow falling over it. The entablature linking the two capitals emerges out of the shadow on the right, where its form is only vaguely suggested, and becomes more clearly defined moving towards the light on the left. The darkest shadow, achieved through rather broad, heavy hatching, was probably done with a brush, and is particularly evident in the area in the right-hand corner behind the saint. It is this shadow which makes the saint stand out in the light of his revelation. Long shadows suggest evening light, but the tapers in the candle holders with the furry lions’ arms are not yet lit.

If we observe the very narrow, perspectivally compressed windows on the right wall, we can see that light is represented by leaving them without grey wash to shine white. Across the floor three streams of sunlight issue from the three windows. Even the ceiling has three long strips of light reflected up from the windows. The contrast between the extremely narrow foreshortened windows and the swelling of the light as it floods into the room, augmenting the space, appears miraculous and relates directly to the text describing how a visionary light, the odour of Saint Jerome’s sanctity, and Saint Jerome’s voice filled Augustine’s room. While scent and the sound of the saint’s voice are almost impossible to paint, Carpaccio’s light creates the sense of air, the carrier of smell and sound, as it spreads and fills the room.

Habitation is conveyed with delicacy and wit in closely observed details: the books in disarray at different stages of being read, the hour glass precariously balanced, small drawers pulled out like filing cabinets below the desk, the open cupboard in the base of the altar, the crozier leaning at an angle, and the pet stoat with its trailing lead. These informal quotidian touches demonstrate that the objects are in use and the room is lived in, encapsulating domesticity. 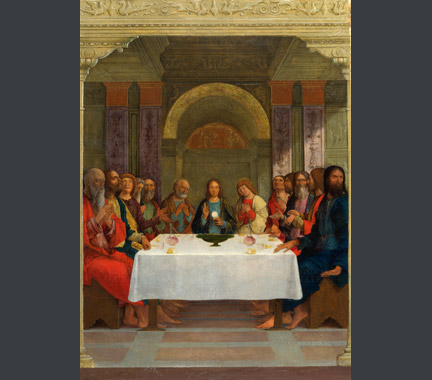 In ‘The Institution of the Eucharist’ (fig. 42) Ercole de’ Roberti’s representation of the ‘upper room’ in which the Last Supper took place creates another type of interior, one imbued with a sense of ritual and religious occasion. The host or Eucharistic bread is presented to the communion celebrant (or viewer) by a strictly frontal Christ in the exact centre, deep in this architectural space. The white marble lintel carved in relief (with birds and vases) and supported by square piers leads into a magnificent dining hall with an Albertian stone coffered ceiling and stone pilasters. Beyond this hall a gold arch frames a deep barrel-vaulted space ending in a flat limestone wall and a fictive bronze lunette with low relief sculpture (representing figures either side of a sacrificial altar). Ercole uses a striking range of stone and marble in beautiful colours, including mauve pilasters with dusty pink bronze capitals set against grey walls, a pink and white marble pavement, and the white marble relief above the entrance to the upper chamber.33 Although he intersperses the colours of precious metals in his architecture – gold, silver and bronze – he imitates their hue rather than their texture or shine, and manages to create an aura of softness and warmth that is quite different from the sharp definition and cool, stony quality of the architecture of Mantegna, Crivelli, or Carpaccio. The intimacy of this biblical ‘upper room’ is partly created by the way we see under the lintel and between the piers of the entrance portal, but also by the lighting, moving from the bright entrance towards dim, dusky recesses. There is also intimacy in the apostles’ delicate bare feet appearing vulnerable on the stone floor.

The receding architecture defines a series of distinct zones leading back towards the inner sanctum, and almost certainly relates to the function of the work as the painted door of a tabernacle containing the host. The keyhole was later filled in.34 During the mid-fifteenth century church tabernacles (such as fig. 43) had evolved into a type of micro-architecture which took the form of marble aedicules with prominent moulded frames, entablatures and pediments encasing a perspectival vista sculpted in relief, terminating in the small door to the cupboard containing the host.35 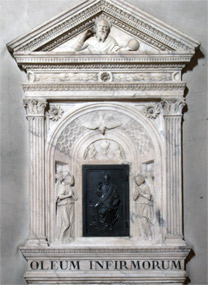 Roberti created a painted version of these structures, employing the same basic design of a strictly axial architectural setting in an ‘all’antica’ style with squared pavement, coffered ceiling and receding archways. Relief sculpture, which played a crucial role in Renaissance Eucharistic tabernacles, is recreated illusionistically by Roberti, and even the blank end wall behind Christ looks like those in three-dimensional marble tabernacles.

In other respects, however, Roberti reinterpreted tabernacle architecture in a defiantly pictorial way, making inventive use of colour, light and shadow, atmospheric effects, and a range of precious materials. These were precisely the advantages which painting had over the three-dimensional arts, allowing Roberti to show not only how a painter could construct more magnificent micro-architecture than sculptors or architects, but also how he could create an interior atmosphere that enhanced the subject through the manipulation of light and spatial effects in relation to architecture. Instead of recession being largely the result of perspectival diminution, Roberti uses light and shadow to make deeper, darker areas suggestive both of the evening event as it was described in the Bible, and of the mystery of transubstantiation. This, together with the small scale and vertical format, the overlapping figures around the table, and the intensity of their facial and gestural responses, creates a conspiratorial, cult-like quality quite unlike that of most Last Suppers.36