Born in the fourth century, Saint Jerome was a scholar and a monk. His translation of the Bible from Greek into Latin is known as the Vulgate, and it is still used by the Catholic Church today.

Antonello offers a peek into the saint’s environment through a fictive stone wall pierced by a broad archway; it’s as though we're looking into a doll’s house. Jerome is in his study at the heart of a lofty, cathedral-like space, its imposing high vaults reflecting the saint’s exalted spirituality and intellect. An array of miniature still lifes – including books, a ceramic vase and a jar – line the study’s shelves.

The artist’s skill in using oil paint enabled him to recreate the texture of these objects, whether rough or shiny, cold or warm. This technical ability, inspired by his study of Netherlandish art, was hugely influential for the artists of Venice, where Antonello made this painting.

Antonello painted his image of Saint Jerome when he was at the height of his technical and artistic ability. Paying homage to Netherlandish painters of the fifteenth century, he has constructed a broad, multi-layered stage set for the saint to inhabit, bursting with props. Every detail is painted with precision, his skill in the oil painting technique enabling him to imitate a range of textures and finishes.

Born in the fourth century, Jerome had an excellent education in theology and classical literature in Rome before leaving the city to escape its many temptations and travelling to Bethlehem. He lived in the desert surrounding the city for some time, famously befriending a lion, and later established a monastery where he began his work of translating the Bible from Greek into Latin. His translation, which provided non Greek-speakers with access to the holy text, is known as the Vulgate and is still used by the Catholic Church today. He is usually shown dressed as a cardinal in long red robes and a wide-brimmed hat in honour of his status and importance in the Catholic Church.

This picture was most probably made for an important patron whom Antonello was keen to impress – and to delight. He thought carefully about the way they would have engaged with the picture, as well as the subject matter itself: a fictive stone wall, pierced by a broad archway, creates a solitary space for Jerome to study while simultaneously inviting the viewer to peek into his environment, as though looking into a doll’s house. A ledge separates the viewer from the saint and his domain, providing a visible boundary between the real and the painted world. It is guarded by two birds: a partridge, which symbolises truth – it was thought that a partridge always recognised its mother’s call – and a peacock, symbolising immortality – their flesh was thought never to decay.

Jerome’s study is at the heart of a lofty, cathedral-like space beneath a high vaulted ceiling. The austere, Gothic, ecclesiastical setting with its slender columns and arches, which might be intended to represent the saint’s monastery, is enlivened by the colourful floor tiles. The saint’s lion companion stalks down the aisle, and through the panes of the square windows we see a sunlit pastoral landscape. Jerome sits at his desk on a rounded chair called a cathedra; normally reserved for high-ranking clerics, usually bishops, it reinforces his status. The study resembles a modern purpose-built office with built-in shelves and desk, and the whole structure is raised up on a platform accessible by a small flight of integrated steps. We know that this kind of study actually existed in the fifteenth century; the description of Lorenzo di Pierfrancesco de‘ Medici’s study in the inventory of 1498 is strikingly similar: ’a large writing desk … with boards and a backrest, and with a cupboard with a cornice made of walnut, and compartments decorated with inlay. Underneath the desk, where one puts one’s feet, is a wooden platform raised up from the ground.'

The study’s shelves are lined with Jerome’s worldly possessions – an array of miniature still lifes including books, both open and closed, a ceramic vase and a jar. A crucifix hangs above his desk. Antonello’s careful imitation of the texture of their surfaces, whether rough or shiny, cold or warm, recalls Jan van Eyck’s approach to painting the objects in his portrait of Giovanni Arnolfini and his wife. There was a painting of Saint Jerome in his study by van Eyck in Naples, where Antonello worked for a period in 1456. It is possible that he saw it there.

The Venetian writer Marcantonio Michiel, who saw Saint Jerome in his Study in Venice, described it in 1519 as a work by van Eyck. Although it is now recognised as one of Antonello’s finest works, made during his time in Venice in the 1470s, Michiel’s mistake is understandable. In fact, Antonello was so skilled that it was once thought that he learnt to paint in oil from van Eyck himself, although we now know this is very improbable. Van Eyck was just one of many Netherlandish painters Antonello was able to study at first-hand when he was in Venice.

The picture shares other traits with Netherlandish painting – the setting of a Gothic cathedral-type architecture was popular with Netherlandish painters, as was the landscape viewed through a window or opening. Both are found, for example, in van Eyck’s Virgin of Chancellor Rolin (Louvre, Paris) as well as the Donne Triptych by Hans Memling.

Saint Jerome in his Study 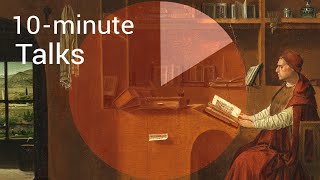 Christ Blessing
Antonello da Messina
Christ blesses the viewer with his right hand. Antonello has altered the original position of the fingers and hand, foreshortening them – that is, compressing their real length – so that they appear to be projecting out of the picture. If you look closely, you can see the outlines of their initi...
Room 55
Christ Crucified
Antonello da Messina
Christ’s body hangs limply on the Cross; the torment of his crucifixion is almost over. He is supported in his final moments by the Virgin Mary and his disciple John the Evangelist. Antonello has composed the picture with a low viewpoint; it is as if we are looking up at a Crucifix placed upon an...
Room 55
Portrait of a Man
Antonello da Messina
This small painting shows how Antonello revolutionised Venetian portraiture in the late fifteenth century: the three-quarter pose, dark background and strong lighting are all innovations from Northern Europe which focus attention entirely on the man’s face.Antonello’s skill at painting in oil ena...
Room 55
The Virgin and Child
Possibly by Antonello da Messina
The Virgin Mary glances down at her baby son, Christ, who clutches a pomegranate in his tiny fist. The fruit, with its blood-red juice, was a reminder of the torture and death he would face at the Crucifixion.Mary was also known as the Queen of Heaven, and her coronation by Christ was a popular s...
Not on display