Architectural desire and the art of the impossible

Architecture in painting explores what painters can do that architects cannot. Fantasy architecture holds a special appeal for artists, patrons and architects themselves, as only one of Vitruvius's components essential for great architecture – beauty (‘venustas’) – is required, while strength (‘firmitas’) and function (‘utilitas’) can be dispensed with. The aesthetic is allowed to rule over the practical to an extent that would never be possible in real buildings. Colours and materials are one way in which the artists in this publication expressed their dreams of vastly expensive features such as bronze capitals (figs. 1 and 2) or porphyry columns, or implausible, but delightful, brightly coloured buildings. 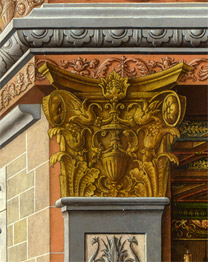 1. Detail showing a capital from Carlo Crivelli, 'The Annunciation, with Saint Emidius', 1486, NG739. 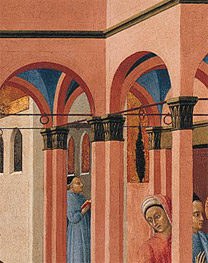 3. Detail of frieze from Lodovico Mazzolino, 'Christ Disputing with the Doctors', probably 1522, NG61.

Sculptural decoration was another route to lavish invention (fig. 3). Technically demanding tasks, such as carving a giant order of twisted columns, could be swiftly accomplished (fig. 4). Above all, innovative designs not only for single structures, but also for clusters of buildings and urban vistas could be drawn, painted and presented without any fear that the funds would dry up, the stonemasons would migrate to another job, or that the buildings would collapse or leak or be unfit for purpose. 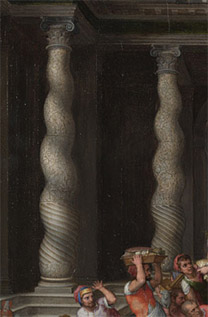 4. Detail showing columns from Marcello Venusti, 'The Purification of the Temple', after 1550, NG1194.

The gap between desire and execution becomes greater the more expensive and complex the art form. As architecture far outweighed other arts in terms of cost and scale, so the gap between what people wanted to build and their ability to achieve it was vast. Painting stepped into that gap (fig. 5).

Given the limitless possibilities, it is perhaps surprising that the architectural designs of Italian Renaissance painters are rarely wild, strange or even fantastic. They were usually conceived in relation to existing buildings or to pictorial prototypes or to religious texts and rituals. Only in a few cases, such as the paintings of Cosimo Tura, did architecture take on truly bizarre shapes (fig. 6).

While strange extremes were usually avoided in this period in Italy, it is also important to think about how different buildings in pictures were from those in which people actually lived, worked and worshipped. With very few exceptions they are idealised structures designed to fulfil the needs of the picture. Whether it was an image of the Virgin Mary requiring a great archway as a visual metaphor for the Virgin as the gateway to heaven (‘porta coeli’) as in Costa and Maineri’s altarpiece, or a version of a rood screen on which to place the crucifix as in Mansueti’s ‘Symbolic Representation of the Crucifixion', or a porch to Solomon’s Temple as in Mazzolino’s ‘Christ disputing with the Doctors', the subject provided a starting point for architectural invention. The tangibility or three-dimensionality of architecture could strengthen a visual metaphor and make it seem real rather than abstract.

We might think that the concrete and structural qualities of architecture would make images and the buildings within them appear more stable and clearly defined. Yet it is remarkable how ambiguous and open-ended these imagined buildings are, enriching and multiplying interpretative possibilities rather than closing them down. This is especially true of ruins, which Renaissance painters wanted to represent not only because it was a way of exploring the ancient world and its relationship to the present, but also because their fragmentary state literally opened them up, both in a physical sense so that they could become transparent buildings, and also in an interpretative sense so that they could be any type of architecture, becoming suggestive and evocative. Far from seeking to define and determine meaning, ruins were deployed to multiply and elude meanings. 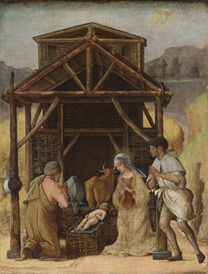 This ambiguity also applies to other buildings, such as temples. Ercole de' Roberti's tiny grand building (fig. 7) is a rustic stable, an ancient Vitruvian temple, and a contemporary church all at once. Ercole seems to be using this picture to explore architectural ideas. Looking at it may raise fundamental questions about how we categorise building types, hierarchies of materials, and how we relate style to notions of period or time.

Artists used architecture to build mystery into their pictures. Bramantino’s 'Adoration of the Kings' (fig. 8) uses the empty vessels in the foreground and the open doorways leading nowhere to create uncertainty and a sense of waiting for answers that will never come.1 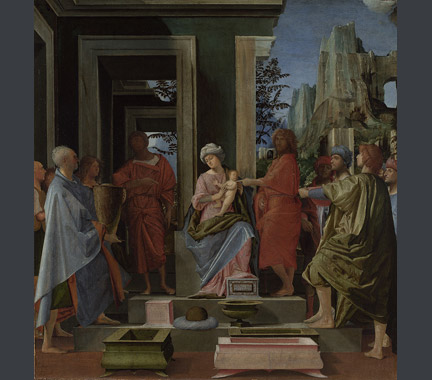 We imagine that the empty vessels once held the Kings’ gifts, but those we can see – a tall urn and a large bowl – would not have fitted into the sarcophagus-like chests. The architecture does not consist of a real building, but of a series of white door frames and cornices joined by strips of green wall. The doorways may be part of a ruin, but they evoke neither the stable of the Nativity, nor an ancient temple. Like the vessels, they are empty and their purpose remains unknown. In another way architecture could be said to run all through the picture underpinning its perspectival design. And even the figures take on an architectural quality – still and perpendicular – as repetition and a degree of abstraction take hold. This reticence may be a way of suggesting the essential mystery of Christ’s birth and everything that came after.

During the Renaissance, writers and artists were engaged in a spirited contest between poetry and painting, and between painting and sculpture, contrasting the merits and skills required of each art.2 From the mid-16th century architecture and painting were included in this ‘paragone’, or competitive dialogue between the arts. Were painters asserting their superiority when they cast practical considerations aside and created more magnificent, audacious structures than architects could build, made of rarer and more expensive materials than contemporary buildings? Ultimately, the inter-relationship was even closer than this idea of a dialogue between separate arts would imply for, as so many of these pictures reveal, architectural design and architectural thinking was part of what painters did.