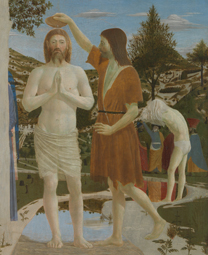 In NG 1155 Matteo has been seen as responding to North Italian artists9 and to the Florentine Antonio del Pollaiuolo, particularly given the wiry muscularity of Christ and Thomas, and the crisp, fluttering linearity of the draperies. The huge landscape has been thought to result from Matteo’s admiration for Piero della Francesca (Fig. 11), the artistic hero of the town of Sansepolcro where Matteo was born. Viewed in these terms, Matteo's otherwise standard image of the Assumption has been to some small degree modernised. However, Matteo’s debts to the Quattrocento ‘visionaries’ (Sassetta and the young Giovanni di Paolo) and all the way back to Simone Martini are just as crucial,10 and his patrons evidently had a major say in the structure and iconography of the altarpiece. Taddeo di Bartolo’s 1401 altarpiece of the 'Assumption of the Virgin' for the Collegiata (now the Duomo) at Montepulciano provided as important a model for the monks of Sant'Agostino as anything in Siena for their polyptych. The shape of the central panel, the National Gallery’s 'Assumption', appears to derive from the façade of Sant'Agostino in Montepulciano.

It has been pointed out that Matteo’s 'Assumption' is organised along the 'spacious lines' of Sassetta's altarpiece made for the Basilica of San Bernadino dell'Osservanza in Siena,11 itself derived from the much revered Porta Camollia fresco by, or started by, Simone Martini (both are single images which are arch-topped).12 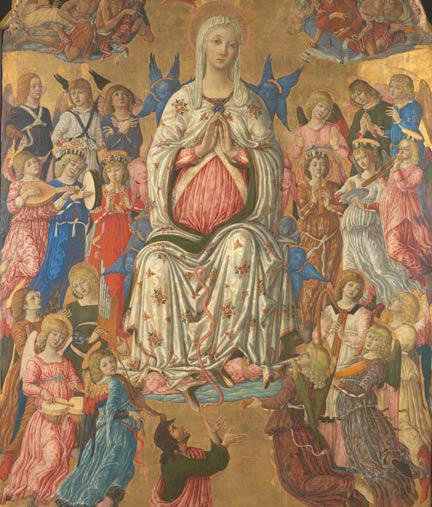 The three circles of angels, for example (Fig. 12), come from these prototypes. But there are also notable variations: Sassetta’s altarpiece had been commissioned by Saint Bernardino, and certain strands in the iconography might therefore have been associated particularly with the Franciscans.13 Matteo's polyptych, on the other hand, was executed for an Augustinian foundation, and had to function as a visual link to the mother city. 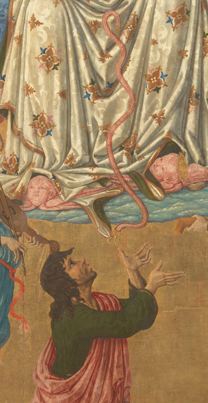 fig. 13 Detail of the girdle dropping into Thomas’s hands

Matteo has de-emphasised the geometric arrangement of the prototypes and he has omitted the mandorla. Sassetta's altarpiece had the panoramic landscape, as do others from the first half of the fifteenth century, but, while Sassetta has assembled the Apostles within it, Matteo has chosen to isolate Thomas with the girdle dropping into his hands (Fig. 13). Even if Thomas's dramatic pose in profile was prefigured in Sassetta's painting (in which he also faces right), and was probably also in Simone's model, Matteo has imbued him with a startling vigour; Thomas seems electrified.

Alternative sources associated with the wider city and the Sienese 'contado' were in fact provided by the Duccio-designed stained-glass window in the Cathedral, before which the worthies of the towns under Sienese control gathered on Assumption Day. This was likely therefore to be a key point of reference for non-Franciscan images, especially in subordinate towns like Asciano. Duccio’s Virgin, like all the others, faces forwards, but, whereas the model pioneered by Simone and much copied presents the figure balanced perfectly (Munich, Alte Pinakothek, WAF671, reproduced on the Alte Pinakotek’s website at http://www.pinakothek.de/en/lippo-memmi [External link]), Duccio’s Virgin has her right knee raised, her left lowered, and it is this more dynamic feature and the arrangement of draperies with her dress exposed that were followed by Matteo. That is not to say that Simone's model at the Porta Camollia was rejected or unimportant. But the physical structure of the altarpiece – as we will see a central narrative with a single saint on either side – recalls Simone’s 'Annunciation' and the other Trecento Marian altarpieces in Siena Cathedral rather than the series associated with Bernardino. The overall message is therefore more all embracing and less specifically Franciscan. 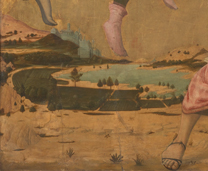 A nineteenth-century guidebook mentions an inscription and the date 1474,14 possibly on the original frame of the altarpiece and now lost. This makes it just possible that the central panel (or its woodwork) was cannibalised from one started for an earlier Servite project in Siena of around that date (evidently abandoned), but it is most likely that Matteo’s altarpiece was in Sant'Agostino from the start. The cluster of buildings in the left background of NG 1155  is possibly a schematic representation of Asciano (Fig. 14). Like the real town, Matteo’s Asciano is situated on a hillside, and includes two churches and the town hall below. It might correspond to a lateral view, seen from the west, of Sant'Agostino, with the Collegiata of Sant'Agata, the town’s other main church, behind. The body of water may be the river Ombrone running through a valley near Asciano tellingly called the Piano (plain) di Sant'Arcangelo, and the scorched terrain resembles the hills around Asciano during a Tuscan August.