The Madonna of the Assumption was particularly important in Siena, and ceremonies for Assumption Day were prominent in its civic calendar. The images of the Assumption that abound in the Sienese 'contado' (territory) can be explained as much by the desire to demonstrate the political loyalty of settlements under Sienese control as to express devotion to the Virgin herself. This is certainly true of Matteo’s altarpiece, made for the small town of Asciano.

Matteo’s altarpiece obeys the visual conventions for this scene, but invests it with a new ardent energy. The Virgin, seated on a throne of cherubim and seraphim, rises upwards. At her feet, there is a ring of musician angels, with two tiers of angels above them, the uppermost tenderly contemplating the extraordinary event, and with a 'dense covey of saints'3 on either side (Fig. 4). She wears the white robes of the Queen of Heaven ('fair as the moon') and lets her girdle drop down to the doubting Thomas. He stands by the empty tomb, which is set in an enormous, panoramic landscape strewn with craggy rocky formations, little trees and fields; a small town and what may be a monastery are painted left and right (Fig. 5). Receiving Mary in heaven is a dramatically foreshortened Christ, flying out of the picture (Fig. 6).4  As Bruce Cole has eloquently described, 'Each of the participants – from the fervent Thomas, whose delicate hands grope for the Virgin’s belt, to the ranks of hovering, ecstatic angels around the comely, sad-eyed Virgin – emits a subtle emotional vibration.'5 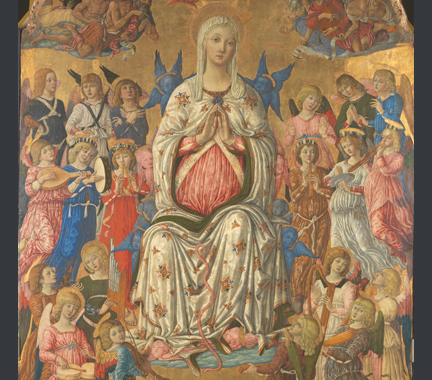 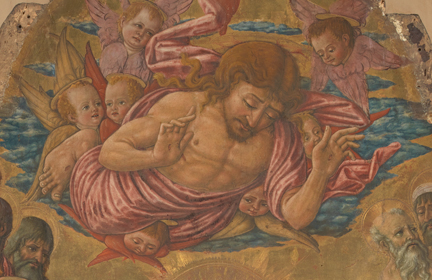 fig.6 Detail of the foreshortened figure of Christ in NG 1155 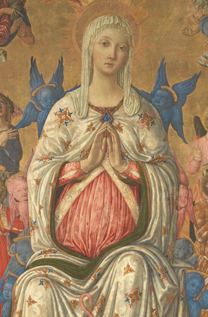 The picture is marvellously organised, obeying a traditional hierarchy of scale, whereby the Virgin is by far the biggest figure in the picture.6 She floats through the picture surface, her patterned white cloak prominent against the reds, blues and greens of the angels; this effect would have been stronger in the relative gloom of a church interior and before some of the pigments changed colour, such as the lake pigments used to paint the areas of red and the greens, which have darkened. The importance of Mary’s belly – her miraculous womb – is underscored by its framing with two white bands of cloth and her praying hands above (Fig. 7). Matteo, however, while deliberately complicating the spatial relationships between the figures, links them through the composition and especially through colour.7 The interplay of colours above echoes in the landscape underneath, with its green fields, and in the tomb with its blue and red panels (Fig. 8). 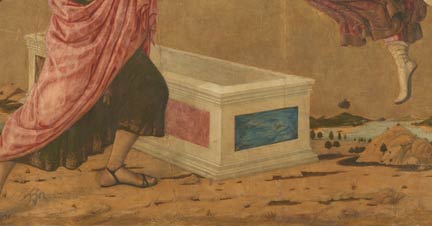 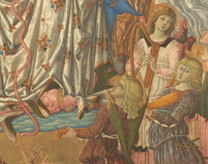 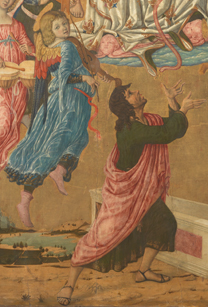 The gilded background, unifying the composition, emphasises the beautiful intervals between the figures, while also allowing Matteo’s visionary manipulation of space. The angels' feet in the lowest tier are carefully connected with the curve of the far horizon; it is as if they have just launched themselves off the ground, although, entirely appropriately, it is not spelled out exactly from where. Their music making is beautifully observed.8 Matteo lends conviction to the sense that the angels actually bear the Virgin's weight by framing her cloudy pedestal on the right with the neck of a lute (Fig. 9); arguably she is supported by their music. Though Thomas stands (in seven-league sandals) below the Virgin, her belt and one fold of her cloak snake across the clouds towards his outstretched hands, reaching into the foreground; this effect contributes to the unusual dynamism of the figure. Thomas's dramatically arched back is echoed by the arcs of the angels nearest to him (Fig. 10).

4. Matteo had already painted a strongly foreshortened God the Father for one of the altarpieces made for Jacomo Scotti (see note 36).

7. In this respect Francesco di Giorgio’s example in the painting of the ‘Coronation’ was evidently more potent. This is also a likely model for the image size of the central panel of Matteo’s polyptych.