The two little girls in this unfinished portrait are Mary and Margaret, Gainsborough’s daughters by his wife, Margaret Burr, and their only children to survive infancy. Mary was baptised on 3 February 1750 and Margaret on 22 August 1751. Mary was given the name of the couple’s first daughter, who died at about 18 months old.

Margaret and Mary run hand-in-hand through dark woodland in pursuit of a cabbage white butterfly, which has landed momentarily on a tall thistle. Margaret reaches out her hand, while Mary clutches her looped-up muslin apron as a net. The children’s attempt to catch the elusive butterfly may be intended to suggest the fleeting nature of childhood, and the fragility of children’s lives. The wood in Gainsborough’s picture is dark and sombre.

This is probably the earliest of at least six double portraits that Gainsborough painted of his daughters between about 1756 and 1770.

The two little girls in this unfinished portrait are Mary and Margaret, Gainsborough’s daughters by his wife Margaret Burr, and their only children to survive infancy. Both were born while Gainsborough was living and working in Sudbury in Suffolk, his own birthplace. Mary was baptised on 3 February 1750 and Margaret on 22 August 1751 – they were probably only 18 months apart in age.

Mary and Margaret are running hand-in-hand through a dark landscape in pursuit of a cabbage white butterfly, which has landed momentarily on a tall thistle. Margaret reaches out her hand for the butterfly, while Mary clutches her looped-up muslin apron like a net. The children’s attempt to catch the elusive butterfly may be intended to suggest the fleeting nature of childhood. The wood in Gainsborough’s picture is dark and sombre.

The Painter’s Daughters chasing a Butterfly is likely to have been painted in about 1756 while the family was living in Ipswich. Mary seems to be about six years old, and Margaret about four or five. The garden of the house Gainsborough rented adjoined that of a much larger house, occupied by his friend Revd Robert Hingeston, who was Master of Ipswich School. On 20 October 1759, before leaving Ipswich for Bath, Gainsborough put an advertisement in the local newspaper listing all of his household goods, some pictures and landscape drawings for sale. Unless this painting of his daughters was a gift from Gainsborough, it is likely that Hingeston bought the picture of the two little girls he must often have seen playing in their garden at this sale.

Before this portrait, Gainsborough had probably never tried painting two full-length and almost life-sized figures. His earlier figures portrayed in the open air such as Mr and Mrs Andrews are quite small in scale and somewhat doll like. His daughters by contrast are shown much larger and in bold, entirely natural attitudes. Painting his own children allowed Gainsborough the freedom to experiment with handling paint, which gives this portrait its remarkable spontaneity and freshness. The pinkish-brown ground is left clearly showing through Margaret’s dress, her apron and her outstretched foot, while thick streaks of white suggest the movement of the fabric in the sunlight. The girls‘ faces are highly finished, but elsewhere Gainsborough’s brushwork is loose and expressive.

Gainsborough is known to have painted six double portraits of his daughters, as well as separate portraits of each of them, between about 1756 and 1770. When Gainsborough painted the girls together he always showed them fondly holding hands, or protecting one another with an arm or half-embrace, as in The Painter’s Daughters with a Cat.

As they grew up, Mary showed signs of mental instability and Margaret of eccentricity. Gainsborough’s fifth double portrait of his daughters as students of drawing (Worcester Art Museum, Massachusetts) reveals his hope they could be trained to draw well enough to earn money, but no work by either daughter is now known. After a brief unhappy marriage in 1780, Mary returned to her parents’ house. Margaret never married, and the sisters lived together the rest of their lives.

The Painter's Daughters chasing a Butterfly 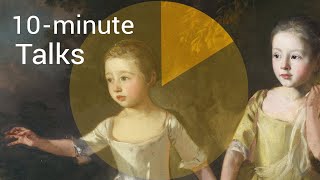 Gainsborough's daughters chasing a butterfly in 10 minutes or less

Clara Davarpanah, one of the Gallery Educators, discusses Thomas Gainsborough's 'The Painter's Daughters Chasing a Butterfly' in this bite sized art history lecture.

Cornard Wood, near Sudbury, Suffolk
Thomas Gainsborough
Cornard Wood is on the outskirts of the village of Great Cornard, two miles from Sudbury, where Gainsborough was born. The view is taken from Abbas Hall, looking towards the village of Great Henny. The church of St Mary’s Great Henny appears in the background, our eyes led to it by the path windi...
Not on display
Dr Ralph Schomberg
Thomas Gainsborough
In 1759 Gainsborough moved to the fashionable spa town of Bath, where he established a very successful portrait-painting practice and remained for 15 years. He painted this portrait of Dr Ralph Schomberg, aged about 56, in Bath around 1770.Gainsborough consulted various doctors during his years i...
Not on display
John Plampin
Thomas Gainsborough
John Plampin is portrayed here aged about 25. The portrait was probably painted around five years before he inherited Chadacre Hall and the manor of Shimpling, Suffolk, in 1757. Gainsborough shows Plampin on Plampin land. The church tower in the background, though brushed in with only a few touch...
Room 35
Margaret Gainsborough holding a Theorbo
Thomas Gainsborough
This unfinished portrait of Thomas Gainsborough’s youngest daughter, Margaret (1751–1820), playing a theorbo (a kind of lute) unites two particularly personal aspects of the artist’s life and career: his deep affection for his family and friends, and their shared passion for music.The Gainsboroug...
Room 35
Mr and Mrs Andrews
Thomas Gainsborough
This portrait of Mr Robert (1725–1806) and Mrs Frances Andrews (about 1732–1780) is the masterpiece of Gainsborough’s early career. It has been described as a ‘triple portrait’ – of Robert Andrews, his wife and his land.Behind Mr and Mrs Andrews is a wide view looking south over the valley of the...
Room 35
Mr and Mrs William Hallett ('The Morning Walk')
Thomas Gainsborough
Gainsborough painted this portrait of William Hallett (1764–1842) and Elizabeth Stephen (1764–1833) shortly before their marriage on 30 July 1785. The couple are shown arm-in-arm on a morning walk with a Pomeranian sheepdog. The style of the portrait draws on the work of earlier painters Watteau...
Room 34
Mrs Siddons
Thomas Gainsborough
Mrs Siddons (1755–1831) was the greatest tragic actress of her time, remaining at the top of her profession for 30 years. Gainsborough painted her in the winter of 1784–5, during her third London season.Most of Mrs Siddons’s earlier portraits depict her in character, but Gainsborough portrayed he...
Not on display
Portrait of the Artist with his Wife and Daughter
Thomas Gainsborough
This is the earliest known self portrait in oil by Gainsborough, and the only known one of him with his family. He sits with his wife, Margaret, and the little rosy-cheeked girl is probably Mary, their short-lived first daughter. It is likely Gainsborough began it before Mary’s burial on 1 March...
Room 35
Self portrait
Thomas Gainsborough
Room 35
The Market Cart
Thomas Gainsborough
A horse-drawn cart trundles along a woodland path on the way to market. Two boys and their dog walk alongside its giant wheel, while two girls sit perched on top of the produce. Carrots spill out of a basket, and turnips, potatoes and cabbages are loosely piled in. The older girl raises one arm,...
Room 34
The Painter's Daughters with a Cat
Thomas Gainsborough
This portrait of Gainsborough’s daughters is likely to have been painted in Bath a year or so after the family moved there in late 1759. Mary appears to be about ten or eleven years old, and Margaret about eight or nine. Margaret leans her forehead back against her sister’s cheek as she holds the...
Room 35
The Watering Place
Thomas Gainsborough
A group of cattle and goats has been herded to drink in a stream or pool. Two country girls, a child and a man sit quietly on the sandy bank. The sun begins to sink behind the distant hills, casting a golden evening light over the peaceful woody landscape.Gainsborough’s painting is based on a dra...
Not on display
You've viewed 6 of 12 paintings