Gainsborough painted this portrait of William Hallett (1764–1842) and Elizabeth Stephen (1764–1833) shortly before their marriage on 30 July 1785. The couple are shown arm-in-arm on a morning walk with a Pomeranian sheepdog. The style of the portrait draws on the work of earlier painters Watteau and Van Dyck, and has a delicate poetic quality largely achieved through Gainsborough’s light, feathery brushwork, which is typical of his late style.

Bride and groom were both 21 when they married, and may be wearing their wedding clothes. Some have seen the portrait as a universal statement about wedded bliss and Hallett’s will records that he lived with Elizabeth ‘most happily for nearly 48 years’. However, Elizabeth’s life can't have been easy as betting and gambling were to be her husband’s downfall. They had two sons and four daughters, and when they died Elizabeth and William Hallett were buried in the church where they had been married.

Gainsborough painted this portrait of William Hallett (1764–1842) and Elizabeth Stephen (1764–1833) shortly before their marriage on 30 July 1785. The couple are shown arm-in-arm on a morning walk with a Pomeranian sheepdog. Gainsborough has suggested the dog’s thick soft coat with sparse, light brushstrokes which he also uses for Mrs Hallet’s dress.

The style of the portrait draws on the work of earlier painters Watteau and Van Dyck, and has a delicate poetic quality, which has been likened to a lingering fragrance. This effect is largely achieved through Gainsborough’s feathery brushwork, which is typical of his late style. The picture is as much a portrait of the romance of young love as it is a likeness of William and Elizabeth Hallett. It was commissioned by the groom who paid Gainsborough £126 for it on 4 March 1786.

The couple may be wearing their wedding clothes. Elizabeth’s gown is of fine ivory silk, caught at the waist with a black silk band. Her breast is covered with a frilled muslin kerchief with a knot of pale grape-green ribbon under it, which is repeated in the extravagant bow on her hat. The three downy ostrich plumes crowning her hat resemble the colour and texture of her powdered hair. The gauzy silk stole draped over her arms echoes the contrived carelessness of her hairstyle and dress. Gainsborough’s slanting brushstrokes in the sky and foliage give the impression of movement, as though there is a light breeze. William Hallett wears a black silk velvet frock-suit, his hair is powdered and he carries a round black hat.

William Hallett was brought up by his grandfather William Hallett I, who had made a fortune as a fashionable cabinet maker and died in 1781. While a teenager, William inherited his grandfather’s villa and estate at Canons in Middlesex. After travelling through Europe for two years on the Grand Tour, William recorded, ‘I returned home, and was married on 30th day of July 1785 to Miss Elizabeth Stephen with a fortune of nearly £20,000’. The wedding took place at the richly decorated church of St Lawrence, Little Stanmore. Bride and groom were both 21. Elizabeth’s background is a little uncertain but she seems to have been the daughter of Elizabeth and James Stephen, a wealthy surgeon who had died before his daughter’s marriage. She is described as resident at Breakspears, an ancient house not far from Canons, then owned by the Partridge family. John Partridge witnessed the couple’s marriage – he may have been a friend or relative with whom Elizabeth was staying.

Some have seen the portrait as a universal statement about wedded bliss. However, William Hallett may have been more preoccupied with speculation about which horse was likely to win the next race. Betting and gambling were to be his downfall. We learn from his will, which he wrote in an informal autobiographical style shortly before his death, that horse racing was his chief interest even before his marriage. Living in the country bored him and he and his wife never lived at Canons. Hallett had let the estate to a racehorse owner and breeder in 1783, two years before he married, and sold it in 1786. It is not clear where the Halletts lived immediately after their wedding. In 1788, Hallett purchased the estate of Little Wittenham, near Wallingford, Berkshire, where he built a ’small house‘. Soon after that they moved to Faringdon House in Oxfordshire, where they lived for 20 years.

In 1807 Hallett made two disastrous property deals and by 1830 there was nothing left of his fortune. His will records that he lived with his wife Elizabeth ’most happily for nearly 48 years, as it was impossible to do otherwise with such a woman‘. We know nothing of the life Elizabeth led after she was painted by Gainsborough sauntering in her filmy dress though a glade aged 21, but it can’t have been an easy one. She had two sons and four daughters and when she died aged 69 she was buried in the Hallett family vault in the same church where she had been married.

William Hallett remarried the following year and sent Gainsborough’s portrait of himself and his first wife to Foster’s sale room, where it did not sell. He wrote his will in the same year and in it lamented the fact that he had no riches to bestow on his children, but added that they ‘will enjoy all my late wife’s fortune’ (which had presumably been tied up in trust funds). He was in debt and had little left to leave. He bequeathed ‘my picture of my late wife... painted before I married July 30th 1785’ – presumably Gainsborough’s double portrait – to his daughter, Lettice Elizabeth. He left another painting and a few religious and law books to his other children and their spouses, money for a ring to his friend and the ‘rest and residue’ to his second wife Mary Jane, ‘hoping sincerely that it may turn out better than expected’. His funeral plans were very modest: ‘I should like to be taken in a concealed manner (for the sake of cheapness) to the Crane Inn at Edgware and from thence by ten poor labourers such as the clergymen of the Parish of Little Stanmore may name... to be buried in my family vault near my late wife’, adding, ‘where my present wife may like to join the party if not better engaged.’

When the portrait was shown at the British Institution’s Gainsborough exhibition in 1859, the reviewer for The Times commented that ‘it would be difficult to conceive a more perfect realisation of youthful elegance and high breeding’, then adding, ‘before the world had withered the young wife’s roses, before the turf and the bottle had soured the husband’s brow, and reddened his nose, or the gout stiffened and swelled those shapely legs of his.’ 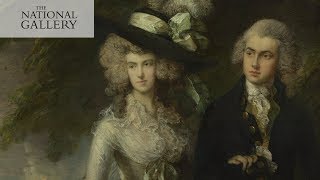 This is part of our 'Talks for All' series. Christine Riding, the Head of the Curatorial Department, discusses Gainsborough's 1785 painting, 'Mr. and Mrs. William Hallett', also known as 'The Morning Walk'.

Cornard Wood, near Sudbury, Suffolk
Thomas Gainsborough
Cornard Wood is on the outskirts of the village of Great Cornard, two miles from Sudbury, where Gainsborough was born. The view is taken from Abbas Hall, looking towards the village of Great Henny. The church of St Mary’s Great Henny appears in the background, our eyes led to it by the path windi...
On display elsewhere
Dr Ralph Schomberg
Thomas Gainsborough
In 1759 Gainsborough moved to the fashionable spa town of Bath, where he established a very successful portrait-painting practice and remained for 15 years. He painted this portrait of Dr Ralph Schomberg, aged about 56, in Bath around 1770.Gainsborough consulted various doctors during his years i...
Not on display
John Plampin
Thomas Gainsborough
John Plampin is portrayed here aged about 25. The portrait was probably painted around five years before he inherited Chadacre Hall and the manor of Shimpling, Suffolk, in 1757. Gainsborough shows Plampin on Plampin land. The church tower in the background, though brushed in with only a few touch...
Room 35
Margaret Gainsborough holding a Theorbo
Thomas Gainsborough
This unfinished portrait of Thomas Gainsborough’s youngest daughter, Margaret (1751–1820), playing a theorbo (a kind of lute) unites two particularly personal aspects of the artist’s life and career: his deep affection for his family and friends, and their shared passion for music.The Gainsboroug...
Room 35
Mr and Mrs Andrews
Thomas Gainsborough
This portrait of Mr Robert (1725–1806) and Mrs Frances Andrews (about 1732–1780) is the masterpiece of Gainsborough’s early career. It has been described as a ‘triple portrait’ – of Robert Andrews, his wife and his land.Behind Mr and Mrs Andrews is a wide view looking south over the valley of the...
Room 35
Mrs Siddons
Thomas Gainsborough
Mrs Siddons (1755–1831) was the greatest tragic actress of her time, remaining at the top of her profession for 30 years. Gainsborough painted her in the winter of 1784–5, during her third London season.Most of Mrs Siddons’s earlier portraits depict her in character, but Gainsborough portrayed he...
Room 34
Portrait of the Artist with his Wife and Daughter
Thomas Gainsborough
This is the earliest known self portrait in oil by Gainsborough, and the only known one of him with his family. He sits with his wife, Margaret, and the little rosy-cheeked girl is probably Mary, their short-lived first daughter. It is likely Gainsborough began it before Mary’s burial on 1 March...
Room 35
Self portrait
Thomas Gainsborough
Room 35
The Market Cart
Thomas Gainsborough
A horse-drawn cart trundles along a woodland path on the way to market. Two boys and their dog walk alongside its giant wheel, while two girls sit perched on top of the produce. Carrots spill out of a basket, and turnips, potatoes and cabbages are loosely piled in. The older girl raises one arm,...
Room 34
The Painter's Daughters chasing a Butterfly
Thomas Gainsborough
The two little girls in this unfinished portrait are Mary and Margaret, Gainsborough’s daughters by his wife, Margaret Burr, and their only children to survive infancy. Mary was baptised on 3 February 1750 and Margaret on 22 August 1751. Mary was given the name of the couple’s first daughter, who...
Room 34
The Painter's Daughters with a Cat
Thomas Gainsborough
This portrait of Gainsborough’s daughters is likely to have been painted in Bath a year or so after the family moved there in late 1759. Mary appears to be about ten or eleven years old, and Margaret about eight or nine. Margaret leans her forehead back against her sister’s cheek as she holds the...
Room 35
The Watering Place
Thomas Gainsborough
A group of cattle and goats has been herded to drink in a stream or pool. Two country girls, a child and a man sit quietly on the sandy bank. The sun begins to sink behind the distant hills, casting a golden evening light over the peaceful woody landscape.Gainsborough’s painting is based on a dra...
Room 34
You've viewed 6 of 12 paintings