This portrait of Mr Robert (1725–1806) and Mrs Frances Andrews (about 1732–1780) is the masterpiece of Gainsborough’s early career. It has been described as a ‘triple portrait’ – of Robert Andrews, his wife and his land.

Behind Mr and Mrs Andrews is a wide view looking south over the valley of the River Stour. Robert Andrews owned nearly 3000 acres and much of the land we see here belonged to him. Gainsborough has displayed his skills as a painter of convincingly changing weather and naturalistic scenery, which was still a novelty at this time.

The unpainted patch on Mrs Andrews’s lap may have been reserved to later paint a baby. Surrounded by the beauty of the woods and clouds of the Essex countryside, self-consciously posing beside their fertile harvest field and well-stocked pastures, Mr and Mrs Andrews live on in a moving evocation of themselves at home in their own landscape.

This portrait of Mr Robert (1725–1806) and Mrs Frances Andrews (about 1732–1780) is the masterpiece of Gainsborough’s early career. The picture remained with their descendants for over 200 years and was largely unknown until Mr George Andrews lent it to the Gainsborough Bicentenary exhibition at Ipswich in 1927. Since then, Mr and Mrs Andrews, an Essex squire and his wife, have become as unforgettable in English art as the Arnolfinis (portrayed by Jan van Eyck) are in European art.

Robert and Frances Andrews married in the parish church of All Saints, Sudbury, on 10 November 1748. Robert Andrews and Gainsborough had been fellow pupils at Sudbury Grammar School, their paths diverging when Gainsborough left in about 1742 to train as an artist in London. Robert Andrews went to Oxford University in 1744, but does not appear to have taken a degree. Most of his energies were to be devoted to farming and improving his land at Bulmer on the Essex side of the River Stour.

Frances Carter was brought up in Ballingdon, a hamlet in the parish of Bulmer. When Robert Andrews married her he was not quite marrying the girl next door, but probably the nearest marriageable girl of his own class. Gainsborough had already painted a portrait of Frances’s parents in about 1747 (Tate, London). Robert and Frances’s fathers each owned a half share of an estate outside Bulmer called Auberies. Probably the two fathers planned the marriage between their children, who may not have had much say in it. When Robert married Frances, aged 16, her father’s half share in Auberies was promised to him as a bequest. Frances’s father died two weeks after the wedding and sole possession of Auberies passed to Robert in 1750. It may have been this that prompted him to commission Gainsborough to paint this portrait, which has been described as a ‘triple’ portrait – of Robert Andrews, his wife and his land.

This is not a marriage portrait, for Gainsborough was probably still in London in 1748 and the couple are not dressed with the formality one would expect in such a picture. Robert Andrews is portrayed in his baggy shooting jacket, with twisted bags of powder and shot dangling from his pocket. He is suited to the landscape he inhabits, with his long-barrelled shotgun under his arm and his attentive gun dog at his feet. Mrs Andrews, still only 17 or 18, is less self-confident, sitting bolt upright in the palest of blue informal skirts and jacket, and a pair of backless mules more suited to pottering about the house. The bench on which she sits is probably imaginary, as it predates the invention of cast iron and would have had to be made from carved wood.

The painting follows the fashionable convention of the conversation piece, a portrait showing two or more people, often outdoors, that is usually small in scale. The emphasis on the landscape here allowed Gainsborough to display his skills as a painter of convincingly changing weather and naturalistic scenery, which was still a novelty at this time. The cloudy sky throws patches of light and shadow over the fields and meadows. The greyest areas of sky contain no blue pigment, only wood charcoal combined with white, which is similar to the grey sections of sky in Gainsborough’s portrait of Dr Ralph Schomberg. This technique for painting stormy skies is fairly common in Dutch seventeenth-century landscape painting, which influenced Gainsborough’s own approach.

Mr and Mrs Andrews pose for Gainsborough under an oak tree at the point where their house’s park meets their arable farmlands. Behind them is a wide view looking south over the valley of the Stour, which is depicted with more accuracy than any other landscape by Gainsborough. In the distance, to the left of Mr Andrews, is the square tower of Holy Trinity Church, Long Melford, and between the trees is All Saints, Sudbury, where the couple married. We glimpse the barns of home farm at Ballingdon Hall, where Frances grew up, and Cornard Wood which Gainsborough painted in 1748. By 1750, Robert Andrews owned nearly 3000 acres and much of the land we see here belonged to him. In the foreground a newly harvested cornfield has been added, suggesting the month is late July or August and that Robert Andrews follows the most recent methods for the productive husbandry of his land. The colours used to depict the sitters and landscape are also in tune: Mrs Andrews’s straw hat, the sky blue of her dress and her husband’s stone- and sage-coloured coat root them in their landscape as surely as the oak tree that spreads above them.

The unpainted patch in Mrs Andrew’s lap is a mystery. Some think Gainsborough intended to paint a cock pheasant there, shot by her husband. Others think the space was reserved to later paint a baby – their first child was not born until 1751, and the couple had nine children in all. A baby – especially a male heir – painted in Mrs Andrews’s lap would have demonstrated Robert’s productive husbandry at home as well as on his estates. We will probably never know why this part of the painting was not completed. Mrs Andrews died on 22 October 1780 aged 48. Robert Andrews remarried and lived until he was 80. They are buried side by side in the graveyard of St Andrew’s, Bulmer.

Surrounded by the beauty of the woods and clouds of the Essex countryside, self-consciously posing beside their fertile harvest field and well-stocked pastures, Mr and Mrs Andrews live on in a moving evocation of themselves at home in their own landscape. 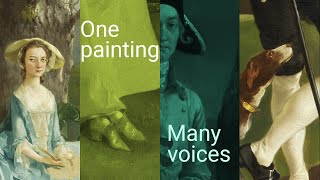 From Jeremy Vine to a parish priest, find out why Gainsborough's painting has intrigued people for centuries.

Cornard Wood, near Sudbury, Suffolk
Thomas Gainsborough
Cornard Wood is on the outskirts of the village of Great Cornard, two miles from Sudbury, where Gainsborough was born. The view is taken from Abbas Hall, looking towards the village of Great Henny. The church of St Mary’s Great Henny appears in the background, our eyes led to it by the path windi...
On display elsewhere
Dr Ralph Schomberg
Thomas Gainsborough
In 1759 Gainsborough moved to the fashionable spa town of Bath, where he established a very successful portrait-painting practice and remained for 15 years. He painted this portrait of Dr Ralph Schomberg, aged about 56, in Bath around 1770.Gainsborough consulted various doctors during his years i...
Room 34
John Plampin
Thomas Gainsborough
John Plampin is portrayed here aged about 25. The portrait was probably painted around five years before he inherited Chadacre Hall and the manor of Shimpling, Suffolk, in 1757. Gainsborough shows Plampin on Plampin land. The church tower in the background, though brushed in with only a few touch...
Room 35
Margaret Gainsborough holding a Theorbo
Thomas Gainsborough
This unfinished portrait of Thomas Gainsborough’s youngest daughter, Margaret (1751–1820), playing a theorbo (a kind of lute) unites two particularly personal aspects of the artist’s life and career: his deep affection for his family and friends, and their shared passion for music.The Gainsboroug...
Room 35
Mr and Mrs William Hallett ('The Morning Walk')
Thomas Gainsborough
Gainsborough painted this portrait of William Hallett (1764–1842) and Elizabeth Stephen (1764–1833) shortly before their marriage on 30 July 1785. The couple are shown arm-in-arm on a morning walk with a Pomeranian sheepdog. The style of the portrait draws on the work of earlier painters Watteau...
Central Hall
Mrs Siddons
Thomas Gainsborough
Mrs Siddons (1755–1831) was the greatest tragic actress of her time, remaining at the top of her profession for 30 years. Gainsborough painted her in the winter of 1784–5, during her third London season.Most of Mrs Siddons’s earlier portraits depict her in character, but Gainsborough portrayed he...
Room 46
Portrait of the Artist with his Wife and Daughter
Thomas Gainsborough
This is the earliest known self portrait in oil by Gainsborough, and the only known one of him with his family. He sits with his wife, Margaret, and the little rosy-cheeked girl is probably Mary, their short-lived first daughter. It is likely Gainsborough began it before Mary’s burial on 1 March...
Room 35
Self portrait
Thomas Gainsborough
Room 35
The Market Cart
Thomas Gainsborough
A horse-drawn cart trundles along a woodland path on the way to market. Two boys and their dog walk alongside its giant wheel, while two girls sit perched on top of the produce. Carrots spill out of a basket, and turnips, potatoes and cabbages are loosely piled in. The older girl raises one arm,...
Room 34
The Painter's Daughters chasing a Butterfly
Thomas Gainsborough
The two little girls in this unfinished portrait are Mary and Margaret, Gainsborough’s daughters by his wife, Margaret Burr, and their only children to survive infancy. Mary was baptised on 3 February 1750 and Margaret on 22 August 1751. Mary was given the name of the couple’s first daughter, who...
Room 34
The Painter's Daughters with a Cat
Thomas Gainsborough
This portrait of Gainsborough’s daughters is likely to have been painted in Bath a year or so after the family moved there in late 1759. Mary appears to be about ten or eleven years old, and Margaret about eight or nine. Margaret leans her forehead back against her sister’s cheek as she holds the...
Room 35
The Watering Place
Thomas Gainsborough
A group of cattle and goats has been herded to drink in a stream or pool. Two country girls, a child and a man sit quietly on the sandy bank. The sun begins to sink behind the distant hills, casting a golden evening light over the peaceful woody landscape.Gainsborough’s painting is based on a dra...
Room 34
You've viewed 6 of 12 paintings