This apparently simple portrait of a young man was revolutionary in Italian painting. Until this moment, artists painted people either in profile view, so only half their face was visible, or by turning them three-quarters to face the viewer.

Here, Botticelli paints the boy head on, mapping his whole face – the fleshy nose, dimpled cheeks, warm brown eyes and determined, protruding chin. Images of the whole face were usually reserved for so-called ‘portraits’ of Christ used for private prayer; showing a young man in such a way was radical.

The boy is dressed simply in brown, his dark blond curls escaping from beneath his red cap. His features are individual but his overall look resembles Botticelli’s idealised males, particularly Mars in his painting Venus and Mars, also in the National Gallery’s collection. Renaissance portraits often beautified their subjects because outward beauty was supposed to reflect inner virtue: the portrait was an eternal witness to the person’s soul as well as their appearance.

This portrait of a young man was revolutionary when it was painted. The man’s dress – a plain brown doublet lined or edged with fur – is tied with cords at the neck; his red cap is similar to the one worn in Antonello da Messina’s Portrait of a Man. The two portraits also share plain dark backgrounds, and close and detailed observation of the features made possible by the strong lighting from the left. These elements are features of Northern European, specifically Netherlandish, portraiture. This was very fashionable in late fifteenth-century Florence, partly because members of the large Florentine community in the trading city of Bruges returned home with portraits of themselves made by northern painters, inspiring artists and patrons alike.

Before this trend for the northern style of portraiture emerged, Italian portraits were mostly in profile, showing only half the face. Painters like van Eyck, who worked in Bruges, were turning their subjects to face the viewer – a view we now take for granted – as you can see in Portrait of a Man (‘Léal Souvenir’) and Portrait of a Man (Self Portrait?). Italian painters began to pick up on this as it offered a more direct communication with the viewer. Botticelli has gone one step further: he shows the boy head-on, his shoulders parallel with the picture’s horizontal edges.

Until this point the frontal view had been reserved for a particular kind of image of Christ. These were copies of the so-called Sudarium, the veil on which Christ wiped his face on the way to the Crucifixion and which had been miraculously imprinted with his face. The veil was thought to reveal Christ’s humanity and divinity – his physical and spiritual presence. As such, it became the new model for secular portraits that were intended not only to record, convey and preserve the sitter’s appearance but also to act as memorials for their souls after their death.

Both aspects of the man are portrayed in this portrait, through the detailed record of his features and the idealisation of his features. The young man looks like the handsome and athletic gods in some of Botticelli’s mythological paintings, particularly Mars in Venus and Mars (NG915), sharing his curly hair, strong bone structure and fleshy features. He has a rounded nose, dimpled cheeks and a prominent chin. Idealisation was an important aspect of Renaissance portraiture. Renaissance writers and thinkers were influenced by the ancient Greek ideas about appearance and its meaning. One philosopher, Marsilio Ficino, wrote in 1469 that internal perfection produces the external; in other words, outer beauty was a sign of inner virtue. As a lasting memorial to the sitter, Botticelli intended to show that this youth is both good and beautiful.

When this picture was first purchased by the National Gallery, it was thought to be a self portrait by the Florentine artist Masaccio, who was working in the decades before Botticelli, mainly on frescoes and large-scale altarpieces. This idea seems unusual now because we do not know of any portraits by Masaccio and because a self portrait by an artist in this period would have been highly unusual: artists did not generally begin to paint self portraits until the following century. The theory might have developed because the close-up view that focuses on the boy’s face is so direct and unassuming, or because he appears so at ease while being painted. The picture is now agreed to be by Botticelli, but the identity of the youth remains a mystery. 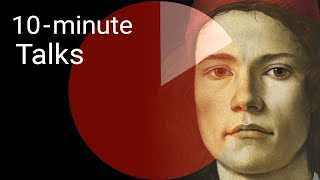 Associate Curator Laura Llewellyn discusses 'Portrait of a Young Man' by Sandro Botticelli, and explores how he revolutionised portraits.

(Showing 6 of 14 works)
Adoration of the Kings
Sandro Botticelli and Filippino Lippi
Images showing the Adoration of the Kings were particularly important in Florence, where the citizens celebrated Epiphany – the feast which commemorated the event – with costumed parades. The shape and scale of this picture suggest that it was made as part of a piece of furniture.The vast entoura...
Room 58
Four Scenes from the Early Life of Saint Zenobius
Sandro Botticelli
This painting was made as part of a group of four works that tell the story of the life of Florence’s patron saint, Zenobius; it is the first of the series. It shows four scenes of his early life as a Christian, from his rejection of marriage to his ordination as Bishop of Florence.It can be read...
Room 58
'Mystic Nativity'
Sandro Botticelli
The infant Christ reaches up towards the Virgin Mary, oblivious of his visitors – the Three Kings on the left and the shepherds on the right. The golden dome of heaven has opened up and is circled by 12 angels holding olive branches entwined with scrolls and hung with crowns. In the foreground, t...
Room 58
Saint Francis of Assisi with Angels
Sandro Botticelli
Saint Francis stands on a marble ledge against a golden background. He embraces a Crucifix and gazes compassionately at the tiny figure of the crucified Christ. If you look closely you can see bright red blood on Christ’s feet and his white loin cloth, where it has dripped from the wound in his s...
Room 58
The Adoration of the Kings
Sandro Botticelli
Botticelli painted at least six scenes of the Adoration of the Kings. This, one of his most expansive and ambitious, is painted in a circular format called a tondo. The figures and animals in the outer circle face inwards to pay respect to the Christ Child, inviting the viewer to do the same. Bo...
Room 58
Three Miracles of Saint Zenobius
Sandro Botticelli
This is the second panel in a series of four paintings that tell the story of Florence’s patron saint, Zenobius. Botticelli shows three of the saint’s miracles set in the streets of Florence. In the first scene, on the far left, he shows the saint – who was the bishop of Florence – dressed in a b...
Room 58
Venus and Mars
Sandro Botticelli
Venus, the goddess of love, looks over at her lover Mars. She is alert and dignified, while he – the god of war – is utterly lost in sleep. He doesn‘t even notice the chubby satyr (half child, half goat) blowing a conch shell in his ear.This picture was probably ordered to celebrate a marriage, a...
Room 58
A Lady in Profile
Follower of Sandro Botticelli
Portraits like this – of idealised women, seen in profile – were popular in fifteenth-century Florence. This picture is not by Botticelli but by his workshop, which was one of many that produced them. The women usually have fair hair, pale skin and rosy lips, as this was thought to be the most be...
Not on display
The Virgin and Child
Follower of Sandro Botticelli
The dark background and absence of any furnishings focus attention on the Virgin Mary, who makes direct eye contact with the viewer. She stands underneath an open curtain, holding her infant son as if to prevent him from falling from the narrow ledge in the foreground. A transparent veil does lit...
Not on display
The Virgin and Child
Workshop of Sandro Botticelli
The Virgin Mary sits in the corner of a simple room, the Christ Child on her lap. She holds him gently with both hands as he presses his cheek to hers and reaches for her breast. The gauzy shirt he wears contrasts with the layers of veils and garments covering his mother.Light streaming through t...
Not on display
The Virgin and Child with a Pomegranate
Workshop of Sandro Botticelli
The Virgin Mary stands with her infant son, Christ, in the corner of a large but sparsely decorated room. He is balanced on a small table, the only piece of furniture, but is dangerously close to its edge; a closed book further restricts the space available to him. The Virgin uses both hands to s...
Not on display
The Virgin and Child with Saint John and an Angel
Workshop of Sandro Botticelli
Restored in 2018–19, this is one of the more significant paintings of the Virgin Mary to survive from the workshop of the Florentine Renaissance artist Sandro Botticelli. The exposed breast with which the Virgin Mary is nourishing her infant son, the Christ Child, is central to the design of the...
Not on display
The Virgin and Child with Saint John and Two Angels
Workshop of Sandro Botticelli
The Virgin Mary sits on a stepped bench in front of a bed of roses, the infant Christ resting on her lap. He hangs on to his mother’s veil, raising his other hand in a gesture of greeting. Both figures make direct eye contact with the viewer, while an angel to either side holds a jewelled crown o...
Not on display
The Virgin and Child with Saint John the Baptist
Workshop of Sandro Botticelli
The Virgin Mary kneels, her hands clasped in prayer. Her downward gaze meets that of her infant son, Christ, who is lying on the edge of her blue cloak, leaning against a bundle of straw. Saint John the Baptist, Christ’s cousin, looks down at him from behind. The scroll he holds bears a Latin ins...
Not on display
You've viewed 6 of 14 paintings