Catherine of Alexandria, a fourth-century princess, was converted to Christianity and in a vision underwent a mystic marriage with Christ. When she would not give up her faith, Emperor Maxentius ordered that she be bound to a spiked wheel and tortured to death. However, a thunderbolt destroyed the wheel before it could harm her. Catherine was then beheaded.

Raphael has focused on the visionary aspect of the saint’s faith, capturing her with her hand on heart and her lips parted, in a moment of divine ecstasy looking heavenwards to a golden break in the clouds. In the foreground is a dandelion seed head. The dandelion often appears in Netherlandish and German paintings as a symbol of Christian grief and the Passion (Christ’s torture and crucifixion).

The saint’s twisting pose reflects Raphael’s study of the sinuous grace of Perugino’s paintings, the dynamic compositions of Leonardo and the monumentality of Michelangelo’s figures.

Catherine of Alexandria, a fourth-century princess, was converted to Christianity and in a vision underwent a mystic marriage with Christ. When she would not give up her faith, Emperor Maxentius ordered that she be bound to a spiked wheel and tortured to death. However, a thunderbolt destroyed the wheel before it could harm her. Catherine was then beheaded.

She is depicted here in a peaceful rural landscape leaning on the spiked wheel but without her usual attributes of a martyr’s palm and the sword. Raphael has focused instead on the visionary aspect of her faith, capturing her with her hand on heart and her lips parted, in a moment of divine ecstasy looking heavenwards to a golden break in the clouds.

In the foreground he has painted a few delicate plants among the rocks, including a dandelion seed head. The dandelion is a bitter herb that appears in Netherlandish and German paintings of the Crucifixion and was symbolic of Christian grief and in particular Christ’s Passion. Raphael also included a dandelion clock in his slightly earlier Holy Family with a Palm Tree (Scottish National Gallery, Edinburgh) and his Baglioni Entombment of 1507 (S. Francesco al Prato, Perugia).

Raphael’s bold presentation of the saint in ecstasy developed out of conventions previously adopted for single figures of saints for polyptychs (multi-panelled altarpieces). Raphael probably worked alongside Perugino, whose religious figures – frequently with upturned heads and raised eyes – were praised by contemporaries for their angelic air. Perugino also placed his figures against distant landscapes and included still-life details of flowers. However, Saint Catherine’s pose is far more dynamic than anything found in Perugino’s works, revealing the influence of Leonardo’s and Michelangelo’s approaches to the figure.

Saint Catherine’s beautiful curving contrapposto pose – reminiscent of a classical statue of Venus (and also seen in Botticelli’s The Birth of Venus, Uffizi, Florence) – is partly derived from Leonardo’s Leda (Royal Collection, London), which Raphael had copied not long before painting his Saint Catherine. The spiralling arrangement of her hair and the yellow lining of her mantle are also characteristic of Leonardo’s approach.

The sense of sculptural monumentality and the foreshortening of Saint Catherine’s raised head almost certainly derive from Michelangelo’s unfinished marble Saint Matthew (1505–6) for the interior of Florence Cathedral (now Accademia, Florence). Raphael made a drawing of it for the bearers in his Baglioni Entombment. Raphael’s figure of Saint Catherine is really a fusion of these two sources – Leonardo’s Leda and Michelangelo’s Saint Matthew – but made very much his own, and reflecting the ideal of universal harmony that was so fundamental to his works.

It is not known who commissioned Raphael’s Saint Catherine – it may have been intended as a picture for private devotion, perhaps for someone particularly devoted to the saint or named after her. Painted in about 1507 when Raphael was working on the Baglioni Entombment, this picture may also have had a Perugian or Florentine patron. The writer Pietro Aretino considered presenting a picture in his possession ‘in which is the image of the figure of Saint Catherine, by Raphael of Urbino’ to Catherine de' Medici, Queen of France. However, it is impossible to tell whether this is the painting once owned by Aretino and recorded in his possession in 1550.

(Showing 6 of 11 works)
View all
An Allegory ('Vision of a Knight')
Raphael
While resting in the shade of a bay tree, the young soldier Scipio has a vision of Virtue and her adversary Pleasure. Virtue promises Scipio honour, fame and glory through victory in war. Pleasure, with fragrant flowing hair, promises a life of ease and serenity.Raphael interpreted the theme not...
Room 61
Portrait of Pope Julius II
Raphael
This portrait of the careworn Pope Julius II (1443–1513) is usually dated to the one-and-a-half-year period during which he wore a beard. He grew it in 1510 as a token of mortification while recovering from a serious illness brought on by the loss of Bologna to the French, and vowed not to shave...
Room 10
Saint John the Baptist Preaching
Raphael
This painting is the only surviving scene from the predella (base) of Raphael’s altarpiece for the Ansidei chapel in S. Fiorenzo, Perugia. The main panel of the altarpiece, ‘The Ansidei Madonna’, is also in the National Gallery’s collection. This predella panel would have been placed beneath the...
Room 61
The Ansidei Madonna
Raphael
This is the main panel of the altarpiece Raphael painted for the Ansidei family chapel in the Servite Church of S. Fiorenzo in Perugia in 1505.The Virgin sits in majesty on a carved wooden throne with the Christ Child on her lap. She draws his attention to a passage in the book on her knee. A str...
Room 61
The Garvagh Madonna
Raphael
In this little picture Raphael depicts the moment when the Christ Child takes a carnation, traditionally symbolic of divine love and the Passion (Christ’s torture and crucifixion), from his cousin John the Baptist’s hand. The space between the children’s hands is the centre of the careful geometr...
Room 61
The Madonna and Child (The Mackintosh Madonna)
Raphael
The infant Christ throws his arms affectionately around his mother’s neck and smiles at us. But the Virgin Mary’s eyes are downcast, as though her thoughts are already on his future sacrifice.The painting probably dates from the early years of Raphael’s time in Rome. It is called the ‘Mackintosh...
Gallery A: Paintings 1250-1600
The Madonna of the Pinks ('La Madonna dei Garofani')
Raphael
In this painting, Raphael transforms the familiar subject of the Virgin and Child into something entirely new. The figures are no longer posed stiffly and formally as in paintings by earlier artists, but display all the tender emotions one might expect between a young mother and her child. The pa...
Room 61 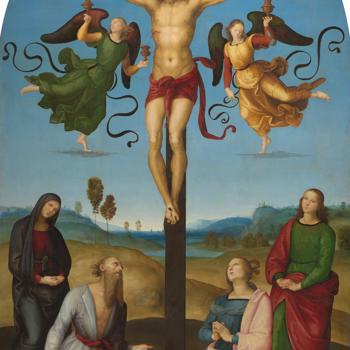