Who did the original drawings?

The underdrawing of the existing 'Virgin of the Rocks' (Composition B) also throws up a few mysteries.

As with the earlier underdrawing, the style appears sketchy and spontaneous in some parts, rigorously controlled in others.

It suggests that Leonardo used cartoons of single figures (or more likely, of individual heads and hands) rather than a cartoon for the entire composition, and then made some alterations freehand. 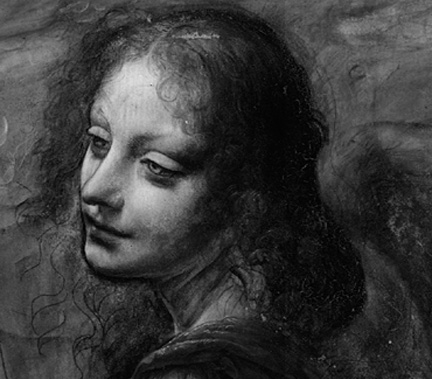 Infrared reflectogram revealing the underdrawing of 'The Virgin of the Rocks'

What is strange is that while Leonardo's underdrawing is not an exact copy of the earlier, Louvre painting, the finished painting reverts to the earlier work in several details.

For instance, the underdrawing shows locks of hair curling down below the right cheek of the angel - something not present in the Louvre version. In the finished work, however, these curls have not been painted in.

This may indicate that Leonardo's assistants, who helped complete the painting, found it quicker and easier to copy the composition of the existing Louvre version, rather than interpret the new elements Leonardo had sketched in.

It has long been held that an overstretched Leonardo delegated part of the painting to assistants - the question was always how much.

While the existence of these underdrawings doesn't entirely solve that mystery, it does show that the first designs were almost certainly in Leonardo's own hand.