Why Leonardo changed his mind

The Virgin of the Rocks was painted for the Confraternity of the Immaculate Conception in Milan. This is actually the second version of the painting. Leonardo probably sold the first version (now in the Louvre, Paris) to a private client when the Confraternity failed to offer him a sufficiently generous bonus.

The argument was patched up, and this new discovery suggests that Leonardo began work on a new composition, but then changed his mind, and reproduced his original composition. 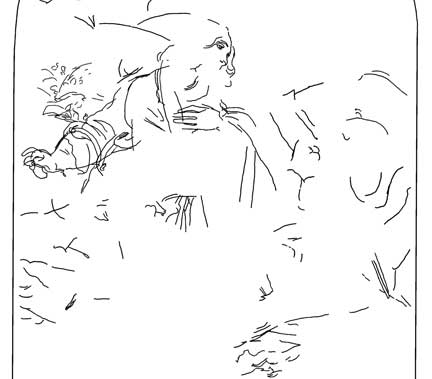 Tracing of Leonardo's unused underdrawing for The Virgin of the Rocks

Leonardo's first idea (Composition A) shows a figure in a rocky landscape. The top of her head is clearly visible, and so is her left hand which she holds across her breast. Her other arm and hand are stretched out to the left, and are more sketchily drawn with several alterations.

The lower half of her body is not visible, but judging from the position of her head, she was certainly kneeling. In the background, rocks and plants are loosely sketched in.

The composition was probably intended to be a picture of the Virgin adoring the Christ Child, although there is no sign of the baby. Perhaps he was drawn with something that doesn't show up in infrared, or perhaps Leonardo abandoned the composition before starting him.

Next: Joining the dots