Batoni and the Grand Tour

Pompeo Batoni (1708-1787) was one of the most esteemed artists of the age. Rather like the Mario Testino or Lord Litchfield of his day, everyone who was anyone wanted Batoni to do his portrait. He captured them at the culmination of a long journey to Rome, displaying the learning, clothes, and fineries they had acquired on their trip.

The poses and props in the portraits provide us with good insights about who these men were. Sir Humphry Morice reclines below in beautiful scenery. Batoni had already used this landscape for another painting about the Roman gods Diana and Cupid. Displaying him in this learned context was almost as essential as including fine portraits of his dogs. 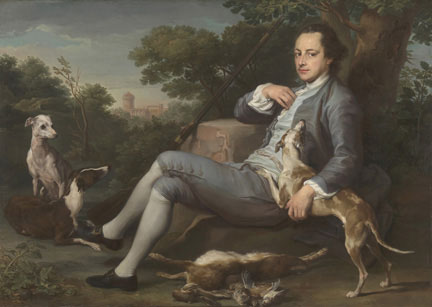 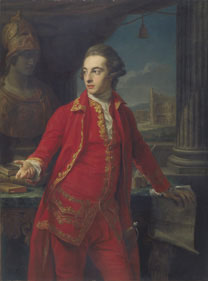 For Sir Gregory Page-Turner, sitting for Batoni was an opportunity to show off newly acquired sophistication, as well as a newly acquired gold-trimmed frock coat. He stands in the pose of one of the most famous antiquarian statues of his day, the Apollo Belvedere.

While travel has changed beyond recognition since the Grand Tour, it did leave a lasting legacy. The works of art and the tastes young men brought back have influenced collections of art throughout Britain, including the National Gallery.