At its height, from around 1660–1820, the Grand Tour was considered to be the best way to complete a gentleman’s education. After leaving school or university, young noblemen from northern Europe left for France to start the tour.

After acquiring a coach in Calais, they would ride on to Paris – their first major stop. From there they would head south to Italy or Spain, carting all their possessions and servants with them.

Their most popular destinations were the great towns and cities of the Renaissance, along with the remains of ancient Roman and Greek civilisation. 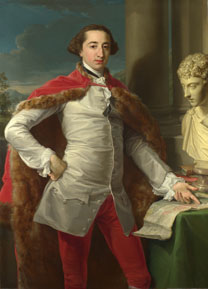 Their souvenirs were rather more durable than holiday snaps, replica Eiffel Towers or t-shirts – they filled crates with paintings, sculptures and fine clothes.

Travel was somewhat more of an ordeal than today (even accounting for the worst airport queues and hold-ups). However rich these young men were, there was no hot shower after a day on the road, no credit card to get them out of a tight spot, and no mobile phone to ring people for help.

Furthermore transport was slow. Instead of taking a 12-month trip, some went away for many years. Most went for at least two, spending months in essential spots along the way.

The plan was to set young noblemen up to manage their estates, furnish their houses and prepare for conversation in polite society. But did the Grand Tour turn them into gentlemen? Sometimes a taste for vice got in the way.

Next: A moral education