Saints at the National Gallery

Many of the paintings in the National Gallery are of Christian subjects, including saints and scenes from their lives.

When the pictures were painted, viewers would have recognised the saints and events shown. However, the subjects are often more puzzling to us now, particularly if we are not familiar with the Bible or Christianity.

With a quick guide, however, you can learn to spot saints in Christian art:

The first Christian saints – after the Virgin Mary, John the Baptist and the Apostles – were the martyrs. The martyrs were put to death for refusing to renounce their Christian faith. They often refused to make sacrifices to the pagan gods of the Roman state religion.

Saint Stephen was the first Christian martyr. He was stoned to death by the Jewish council after accusing them of murdering the Messiah. 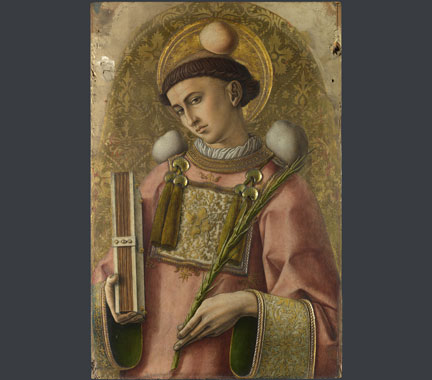 Other early saints are known as ‘confessors’ because they suffered heroic hardships (but not death) as the result of making their faith in Christ publicly known.

Since 1234 only the Pope has been allowed to create new saints. In this formal process a papal commission is set up to investigate the life and miracles of the suggested candidate.

The candidate is first ‘beatified’ or blessed. It is only in the final stage – canonisation – that he or she becomes a saint. Not all people who are beatified go on to become saints.

The making and unmaking of saints has always been a controversial issue. In the 16th century the veneration of saints was seen by Protestant Reformers as detracting from the worship of Christ.

Find out how to recognise saints and learn about patron saints

Banner image above: Detail from Lucas Cranach the Elder: Saints Genevieve and Apollonia from The St Catherine Altarpiece: Reverses of Shutters, 1506