This mysterious painting by Leonardo da Vinci shows the Virgin, Christ, Saint John, and an angel in a dark landscape, with a backdrop of mountains, caves and water.

Legendary tales of a childhood meeting between Jesus and his cousin Saint John the Baptist first became popular in the 14th century. It was claimed that when King Herod ordered the Massacre of the Innocents, the Holy Family fled to Egypt and on their way met Saint John, who also escaped the massacre. 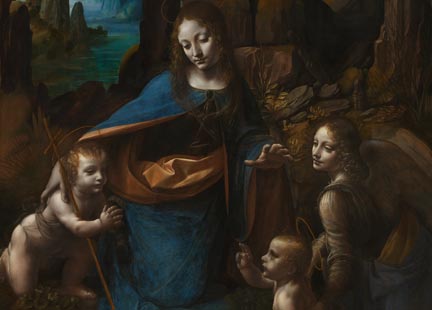 The Virgin of the Rocks demonstrates Leonardo's revolutionary technique of using shadows, rather than outlines, to model his figures. The Virgin and Child are usually shown in bright daylight, their faces set against the sky. Leonardo has chosen the dark background of rocks in order to model the faces in light, which is what makes the image so striking and so unusual.