This is the last journey of the Fighting Temeraire, a celebrated gunship which had fought valiantly in Lord Nelson's fleet at the battle of Trafalgar in 1805. Thirty three years later, decaying and no longer in use, she was towed up the Thames to be broken up in a Rotherhithe shipyard. 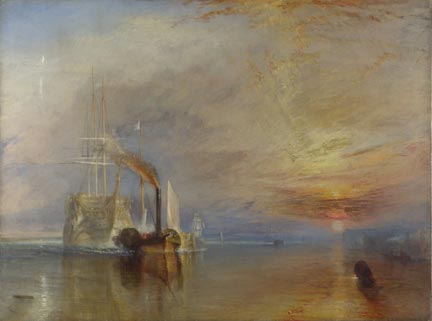 Turner's painting pays tribute to the Temeraire's heroic past. The glorious sunset is a fanfare of colour in her honour. It can also be seen as a symbol of the end of an era, with the sun setting on the days of elegant, tall-masted warships. The Temeraire is already a ghostly shape, fading away behind the solid form of the squat little steam tug that pulls her along to her fate.