In around 1858, Jean-Baptiste-Camille Corot was commissioned by his friend and fellow artist Alexandre Gabriel Decamps (1803–1860) to paint these panels for the studio of his house in the Rue de France in Fontainebleau. 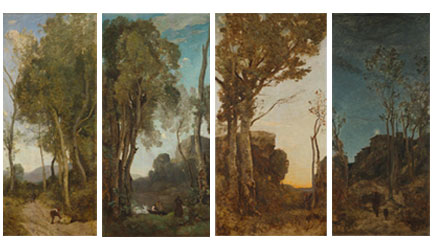 Jean-Baptiste-Camille Corot, The Four Times of Day, about 1858. © The National Gallery, acquired with the assistance of the Art Fund (with a contribution from The Wolfson Foundation), 2014

The panels, depicting four different landscapes, framed on either side by tall graceful trees, trace the day’s progress from glowing dawn to starry night. They are without narrative; the figures that appear in each panel illustrate man’s place in nature in what are meditative evocations of the beauty of the landscape. They are composed from memories or sketches of real landscapes, including, as in much of Corot’s late work, the landscape and light of Italy.

In Morning, the sky fades from the intense orange glow of the rising sun to a pale blue. A figure on the right in a red hat holds a stick in one hand, and raises the other to the tree trunk in an attitude typical of so many of the artist’s figures, perhaps intended as an echo of reaching branches. He is conjured up out of a few fluid strokes and his features are not delineated. At the centre are two goats, barely visible against the undergrowth.

In Noon, a figure in a red hat in the foreground rests his foot on a rock to adjust his laces, and further back, a couple walks along the path.

In Evening, two women in the boat, one sitting, the other standing, and carrying what is probably a mandolin evoke an 18th-century 'fête champêtre'. On the bank, a mysterious monk-like figure turns away from the boat.

In Night, a figure in a red cap, his dog at his side, makes his way homewards down the path, his head bowed. The dark blue sky is dotted with white, and the moon shines out over the topmost house of the Italianate village which clings to the hillside.