Corot famously completed the panels in a week, as was later recalled when the pictures were sold at the Decamps sale in 1865:

‘Decamps, dizzy with the speed with which they were painted, said from time to time to his friend: “Not so fast, don’t hurry yourself so, there is enough soup here for a few more days!”1 Decamps reportedly spent hours in contemplation of the panels, filled with dismay at their quality and technique: ‘What an education you have given me ... If I wasn’t too old, if I had my life in front of me still, I would give up all my artificial recipes and I would wish for no other virtue than yours: sincerity’.2

The freedom and speed of handling is evident throughout. Thin brown underpainting, in which all the brushstrokes are visible, is evident in the foregrounds. Fluid brown paint is used to reinforce tree trunks and add branches, and Corot used the end of his brush to scratch out from the paint the forms of branches and grasses in 'Noon'. 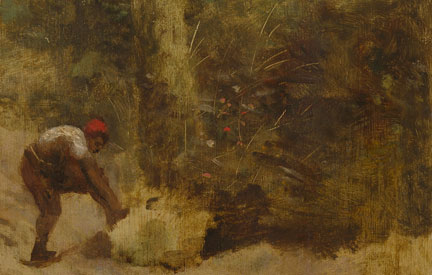 Detail from Jean-Baptiste-Camille Corot, The Four Times of Day: Noon, about 1858. © The National Gallery, acquired with the assistance of the Art Fund (with a contribution from The Wolfson Foundation), 2014

In 'Night', the man and his dog are painted in a thin dark paint which blends into the landscape and in 'Morning', the almost transparent goat at the centre is quickly conjured out of a few strokes of cream paint.

As was his usual practice, the artist painted the skies at a late stage; in 'Night' the blue paint is brought round the rooftops of the hillside village. Final touches such as the orange glow on the horizon of 'Morning', the white clouds in 'Evening', and the dab of white which is the moon in 'Night' were added in thick impasto. The red hats worn by the figures are characteristic of Corot’s work, giving bright accents of colour among the greens and browns of the landscapes.