Skip to main content
Past exhibition
Conversations with God

On loan from Kraków's historic Jagiellonian University, one of Europe’s oldest founded in the 14th century, this is the first time that we’ve exhibited a painting by a Polish artist.

Despite being largely unknown outside his homeland, Matejko is regarded as the national painter of Poland. His huge paintings, showing iconic events from Polish history, are part and parcel of Poland’s national identity.

This painting celebrates one of the most important names in the history of science, Polish mathematician and astronomer Nicolaus Copernicus (1473—1543); known for his theory, published in 1543, which proposed the solar system with the sun at its centre and the planets orbiting around it.

Matejko painted the enormous canvas in 1873 to mark the 400th anniversary of the astronomer’s birth.

We’ll also be displaying a 1543 copy of Copernicus’s ‘De revolutionibus orbium coelestium’; the publication that marked a turning point in human understanding of our place in the universe.

This is a rare opportunity to see one of Poland’s most loved works of art.

The Capricorn Foundation in memory of Mr H J Hyams

With additional support from 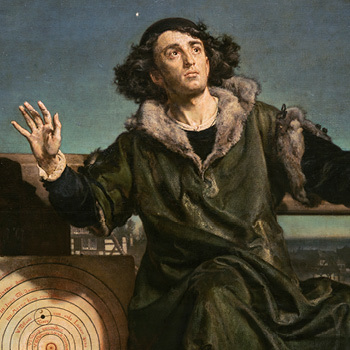 One painting, many voices

Discover the painting described as Poland's national icon
Video
One painting, many voices: Read more
X
/
Y
Subscribe to our emails for the latest news about exhibitions
Subscribe