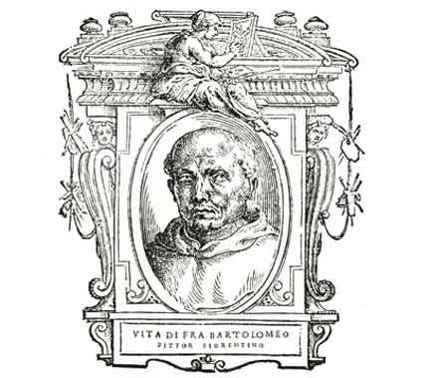 Bartolommeo di Paolo del Fattorino, known as Fra Bartolommeo (also as Baccio della Porta), was one of the leading Florentine painters of the early 16th century.

He was trained, according to Vasari, by Cosimo Rosselli. He came under the spiritual influence of Savonarola in the 1490s and entered the friary of San Domenico at Prato as a novice in 1500. After taking religious vows he returned to Florence and resumed painting in 1504.

He was in Venice in 1508 and later in Rome, according to Vasari. He was deeply influenced by Leonardo and Raphael, especially in his altarpieces. His work is imbued with a mood of pietism, not unlike that of Fra Angelico in the preceding century. Following Leonardo, Fra Bartolommeo was a pioneer in the study of landscape, leaving many drawings that record the appearance of the Tuscan countryside.

At different periods he worked in collaboration with Mariotto Albertinelli (1474-1515).

The Virgin adoring the Child with Saint Joseph
Fra Bartolommeo
In this painting intended for private devotion, Fra Bartolommeo emphasises the humble circumstances of Christ’s birth. The Virgin kneels on the ground before the newborn Christ, while barefoot Saint Joseph watches over the baby. The makeshift stable made from the ruins of a classical building sta...
Not on display
The Madonna and Child with Saint John
Probably by Fra Bartolommeo
The Virgin is seated simply on the ground in the pose known as ‘the Madonna of Humility’, with the Christ Child on her lap and the infant Saint John the Baptist to her side, forming a broad-based pyramid. The motif of the two holy children embracing derives from a design by Leonardo.Saint John th...
Not on display