The painter is named after the series of eight panels showing episodes from the life of the Virgin from the church of St Ursula in Cologne. The National Gallery's 'Presentation in the Temple' is one of these panels: the remainder are in the Alte Pinakothek, Munich. Other panels are linked with the Master largely on stylistic grounds.

The influence of Bouts can be seen in these panels of the life of the Virgin, as can that of Rogier van der Weyden and it is thus likely that the artist was trained in the Netherlands.

Chronologically the artist occupies a place in the history of painting in Cologne between Lochner, who died in 1451, and the painter known as the Master of the Saint Bartholomew Altarpiece, who was active from about 1470. The panels of the life of the Virgin are likely to be relatively early works, possibly of the early 1460s.

Paintings by Master of the Life of the Virgin

The Presentation in the Temple
Master of the Life of the Virgin
A priest, Simeon, receives the infant Christ from the Virgin Mary, ready to perform the Jewish rite of circumcision. Two women cup turtle doves in their hands, the traditional offering for the ritual of purification, made after a woman had given birth (Luke 2: 21–24).Simeon recognised Christ’s di...
Room 62 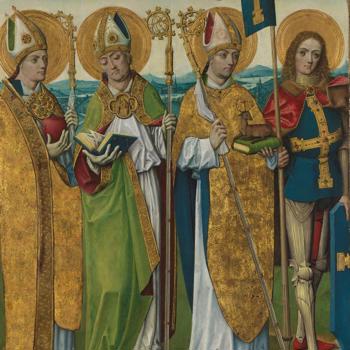