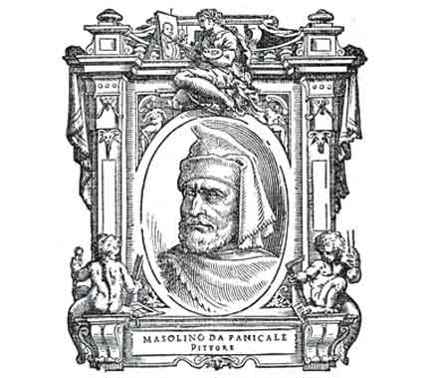 Masolino da Panicale was an important Florentine artist of the early 15th century. He collaborated with Masaccio on various occasions. The fragments in the collection are from the altarpiece which the two artists made for S. Maria Maggiore in Rome.

Masolino was born in Panicale near Florence and joined the guild there in 1423. He worked in Hungary in the late 1420s. He is known for his fresco cycles in Rome, Empoli and Castiglione d'Olona, but especially for his collaboration with Masaccio in the Brancacci Chapel in Florence in the 1420s.

Masolino's art is more decorative than Masaccio's. Although he learned the technique of single vanishing-point perspective, his use of it is less narratively significant than Masaccio's, and his figures retain more of the delicate charm of those by Lorenzo Monaco, who may have trained him.

A Pope (Saint Gregory?) and Saint Matthias
Masolino
Saint Matthias holds the axe that was used to chop his head in half. He was not widely worshipped but he was an important saint for the church of Santa Maria Maggiore, Rome, where this panel formed part of an altarpiece: his relics were buried there, and he was depicted in a mosaic in the east en...
Room 60