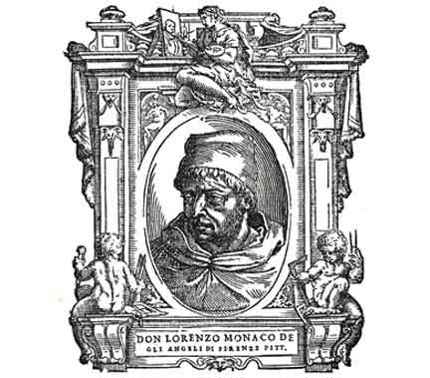 Piero di Giovanni was one of the leading painters of Florence at the beginning of the 15th century. He is known as Lorenzo Monaco (Lorenzo the monk) because he took the name Lorenzo when he entered the Camaldolese monastery of Santa Maria degli Angeli in 1391.

Lorenzo painted four altarpieces for his Order. He died between 1422 and 1424. He was apparently from Siena, but worked in Florence. He may have been trained by Agnolo Gaddi and Jacopo di Cione. His activity can be traced back to the 1390s.

The influence of Sienese artists such as Duccio, led him to transform the sober style of late 14th- century Florentines such as Spinello Aretino into a graceful and sophisticated idiom. This in turn was influential on later Florentine painters, especially Masolino.

(Showing 6 of 9 works)
View all
Adoring Saints: Left Main Tier Panel
Lorenzo Monaco
A group of saints dressed in glowing colours cluster on an elaborately decorated floor. This large painting was part of a complex polyptych (a multi-panelled altarpiece) painted for the Camaldolese monastery of San Benedetto fuori della Porta Pinti in Florence.They look at the coronation of the V...
Room 60
Adoring Saints: Right Main Tier Panel
Lorenzo Monaco
A company of richly dressed saints, their gilded haloes stamped with elaborate patterns, gaze at something on their right, or turn to talk to each other. This painting is part of a large multi-panelled altarpiece made for the Camaldolite monastery of San Benedetto fuori della Porta Pinti in Flore...
Room 60
Incidents in the Life of Saint Benedict
Lorenzo Monaco
In this painting, we see two stories from the life of Saint Benedict happening at once. On the left Benedict tells Saint Maurus to rescue Saint Placidus, who has fallen in the lake while fetching water. Maurus walks out on to the lake as if it were land and pulls Placidus – still grasping his jug...
Room 60
Saint Benedict admitting Saints into the Order
Lorenzo Monaco
A bearded and venerable Saint Benedict admits two disciples, Maurus and Placidus, to his newly founded religious order, while a group of monks look on. They were young Roman noblemen who were sent to Saint Benedict to be educated and became two of his earliest followers.Although members the Bened...
Gallery A: Paintings 1250-1600
The Coronation of the Virgin
Lorenzo Monaco
Christ and his mother, Mary, are seated on a throne. He places a crown on her head, and she crosses her hands on her chest in a gesture of acceptance. This is the coronation of the Virgin, a popular subject in medieval Italy where Mary was especially revered. According to medieval Christian legen...
Room 60
The Coronation of the Virgin
Lorenzo Monaco
Room 60
The Death of Saint Benedict: Predella Panel
Lorenzo Monaco
Room 60
The Baptism of Christ
Probably by Lorenzo Monaco
This small octagonal painting shows Christ being baptised in the river Jordan by Saint John the Baptist, his cousin. Delicate wavy white stripes around Christ’s knees show where his body has disturbed the water’s surface.The picture’s size suggests that it was part of the predella – the lowest pa...
Room 60
Saint Benedict in the Sacro Speco at Subiaco
Workshop of Lorenzo Monaco
This panel shows Saint Romanus, who devised an ingenious system – shown here – to deliver food to Saint Benedict, who lived as a hermit. Saint Benedict stands waiting for the basket at the mouth of his isolated cave-dwelling. Both saints are painted with the same colours as the rocks – grey with...
Gallery A: Paintings 1250-1600
You've viewed 6 of 9 paintings