The last concert at the National Gallery took place on 10 April 1946, six and a half years after the first. Myra Hess elected not to play herself, afraid that the emotion of the day would be too much, and instead gave the honour to the Griller Quartet, who had performed regularly at the concerts since their inception. 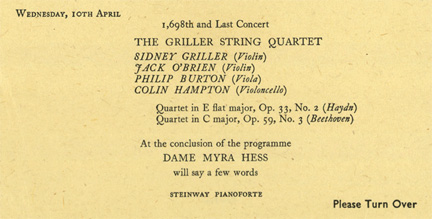 When the musicians finished and the audience had grown quiet, the new Director of the National Gallery, Philip Hendy, took the platform. He explained why the concerts had to end and expressed his hope that they might recommence once the building had been repaired. When Hess rose to speak she referred back to his words. ‘Even a glimmer of hope that we may have music here again,’ she said, ‘Relieves the gloom of this sad parting.’

‘It is seldom that we do not wish to be someone else,’ she added, ‘But for once in a way I would not change places with anyone in the world, for the experience of these six and a half years has been the greatest privilege any musician could hope to have’.

They had begun, Myra Hess explained, by wanting to provide an antidote to the sense of foreboding that accompanied the outbreak of war. But gradually, they had become aware that they were realising an ideal: ‘that music should be an integral part of the life of the nation, and not merely an occasional pleasure or a luxury for those who could afford it’.

The union of the arts could stand for much in a disunited world and perhaps, she hoped, the reconstruction of the Gallery might permit them to return in the future and ‘resume this perfect alliance of painting and music’. Then, with a final thank you, Myra Hess said her farewell. It was an emotional conclusion to a very sad day.