The fate of the National Gallery concerts was hotly debated. ‘Music or Pictures?’ asked a headline in the Manchester Daily Dispatch in May 1945, summing up the choice. Campaigners who wanted to see the events come to an end argued they severely limited access to the collection.

As a result of war damage, only 13 of the Gallery’s 27 rooms were available for the display of the returning paintings. The concerts closed a significant proportion of the few that were open for several hours a day. 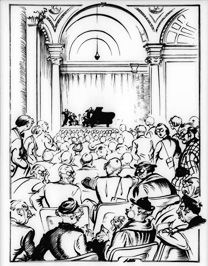 'For years I have been eating my lunch to Rembrandt, Hals, Vermeer and Hooch, so I find it a bit strange switching over to Bach, Chopin, Schubert and Brahms.’

‘It would be a sad prospect indeed,’ wrote one correspondent to The Times, ‘If... those whose daily toil only permitted a lunch-time view of pictures were to find the rooms containing their favourite Holbein or Vermeer given up to a performance of Bach, or, at best, were merely permitted to tip-toe round the walls, pursued by the angry looks and “sh’s” of an enraptured audience.’

In a letter to one of the Gallery Trustees, sent in August 1945, the President and Council of the Royal Academy of Arts expressed similar views. While they fully appreciated the high quality of the concerts at the Gallery, wrote the Council, they felt it undesirable that the institution should be used in normal times for any purpose other than that for which it was provided by the state and supported by tax payers. 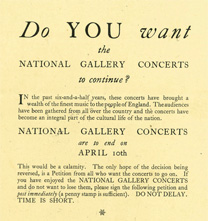 Pamphlet protesting about the end of the concerts

Those on the other side of the debate campaigned with equal ardour. ‘We Londoners have lost so much that can never be replaced,’ wrote the actress Sybil Thorndike in a note to The Times, ‘Surely we can hope to retain one of the real benefits that have been given us during these dangerous, difficult and nearly always uncomfortable years?’

‘They have meant a very great deal to me,’ wrote another correspondent, ‘And I have come up from the country whenever possible to hear them. I know this applies to many others as well as myself, and I am sure they fill a great need.’

As the debate rumbled on, a petition was raised by conductor Alec Sherman, who gathered over 4,000 signatories from every corner of the city, including luminaries such as the author E.M. Forster, the poet Louis MacNeice, and Ralph Vaughn Williams, the celebrated composer.

Extract from a petition to save the concerts

Next: The last concert