Read about the campaign to save the Myra Hess concerts at the National Gallery after the end of the Second World War.

With victory on the horizon in spring 1945, speculation began about the fate of the concerts after the peace. Soon it would be safe for the Gallery’s evacuated paintings to return. Should the concerts continue when they did?

Myra Hess believed they should. In an affectionate letter to ‘K’ (Sir Kenneth Clark, the National Gallery's Director), she wrote: 'Something unprecedented has happened to music in the National Gallery and I am sure it could not be recaptured elsewhere ... Music has become part of the daily life of thousands of people. This need is certainly not going to cease with the Peace; in fact its importance will increase in the difficult years ahead.' 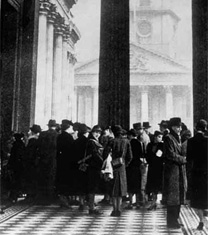 What made the Trustees of the National Gallery decide to end the concerts? A report from the time indicates they were not convinced that the events introduced a new audience to art. Hundreds of people were queuing outside the Gallery, but they were visiting mainly to hear music, not to see the paintings.

The Trustees regarded the queues as ‘a depressing feature’, while the 700 chairs that permanently occupied several galleries made the pictures held there practically inaccessible.

Bomb damage had rendered much of the building unusable – and with so few rooms available to display the masterpieces that had been hidden away for more than half a decade, the Trustees could not sanction a project that would further limit opportunities to view the collection. 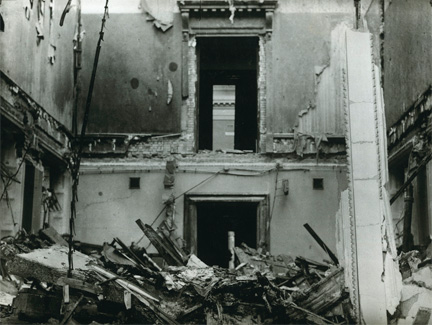 Bomb damage, Room 26 at the Gallery

The chairman of the Board, Vincent Massey, wrote to Myra Hess to confirm the decision. He began with an expression of thanks for the hard work that had done so much to keep the Gallery alive.

Then Massey made room for a modicum of hope. ‘We have been careful to draw up our resolution in such a way,’ he asserted, ‘As to leave the door open for music to return to the Gallery when we have command of all our building again. So you have not only brought music to the Gallery but you have given us a great idea for the future.’

Massey’s promise went a little way to softening the unwelcome news. It was sad to see what Myra Hess called ‘the great adventure’ draw to a close. But as the letter suggested, it was to prove only a temporary end.

Music did eventually return to the Gallery in the 1970s. And in September 2006, a day of recitals was held to celebrate everything the war-time concerts had achieved. Since then ‘Dame Myra Hess Day’ has become an important fixture in the National Gallery’s calendar and continues to introduce a new audience to the concerts and their legacy.

Next: Music or pictures?