How the concerts started

The first concert took place at the National Gallery on 10 October 1939. Myra Hess and her team had only a few weeks to make the arrangements and busied themselves booking performers, equipping the venue, and organising publicity.

Director Kenneth Clark began by winning the blessing of the Gallery’s trustees for the project then turned his attention to convincing the Home Office and Ministry of Works to grant the concerts dispensation from the ban on public gatherings. ‘The sooner we can start the better,’ he wrote, ‘As this is the period when people are beginning to feel the want of nourishment for mind and spirit and it would be a great thing for the National Gallery to give a lead’.

Extract from letter from Director Kenneth Clark to Sir George Gater, Joint Secretary at the Ministry of Home Security 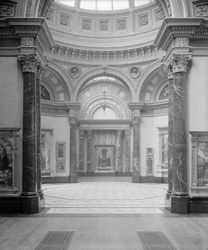 While this correspondence continued, the organisers began the work of turning the Gallery into a music venue. At a meeting on 4 October, it was agreed that the concerts would take place daily at 1pm, with a repeat performance at 5pm on Tuesdays and Thursdays.

An admission fee of one shilling would be charged for entrance to the midday concert and two shillings for the late afternoon programmes.

Next came the search for a room of an appropriate size. An octagonal gallery beneath a glass dome was chosen (Room 36) and a small wooden platform installed for the performers.

Some of the few remaining pictures in the Gallery provided decoration, along with the board room curtains, which were hung across one side of the octagon in an attempt to give the space, in Clark’s words, ‘a vestige of baroque splendour’.

Several hundred chairs were rented and many more donated: Buckingham Palace was among the many donors over the years. And finally on 6 October Steinway and Sons delivered a concert grand piano.

Myra Hess tested the piano with a burst of Beethoven's Moonlight Sonata. The acoustics which, given the unusual shape of the room, could have been very poor, were pronounced magnificent. Fired by enthusiasm, the organisers had turned idea into reality in just a few weeks and the stage was set for the inaugural event.

Next: The first concert