The queue that stretched around Trafalgar Square on Tuesday 10 October 1939 gave Myra Hess and her team the first hint that the concerts were going to be more popular than they expected. The doors of the Gallery were due to open to the public at 12.30pm, half an hour before the first concert was scheduled to begin.

At 12.20pm the organisers peeked out, expecting to see a small crowd. Instead, the line stretched down the Gallery steps, along one side of Trafalgar Square and right around the corner. 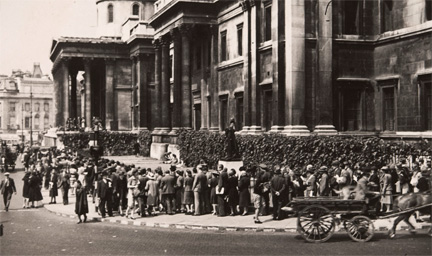 The opening event had been organised so quickly that there had been little time for advertising and Myra Hess had decided to give the first performance on her own rather than get together a group of musicians, ‘In case the whole thing is a flop.’ She expected 40 or 50 of her friends would turn up to support her; instead she played to an audience of around 1,000, with many more turned away.

Nigel Hess: Yes, I think from this distance people forget how incredibly successful the concerts were, how hugely they were supported. I mean, the very first concert is a case in point. I know it is a very well known story, but Myra herself gave the first concert and she thought that maybe just 100 of her friends would turn up. She thought it was actually going to be a big flop. She was very, very nervous about it and the concert was at one o’clock and at 12.50pm Sir Kenneth Clark, the Director of the Gallery, came rushing in and said, ‘we’ve got a problem’, and Myra thought, ‘oh goodness, what now?’ and he said, ‘there are a thousand people on the pavement snaking all the way around the front of the Gallery and around Trafalgar Square’. And they were only supposed to have 200 people in the concert – that was the licence they had, a maximum of 200.

I think for that first concert they let in about 700 – 800 people and then it went on from there. They didn’t have any money and they didn’t have any change when the first person arrived with half a crown and nobody had change for a shilling. It must have been pandemonium.

If you think that those concerts went on for six and a half years, five days a week, all the artists got paid the same five guineas each whether they were a famous name or a young beginner, and just the sheer organisation is extraordinary.

Find out more about how the Myra Hess concerts started

In his conversations with the press, the Gallery’s Director, Kenneth Clark, had stressed how informal the organisers wanted the events to be. There was to be no advance booking, and audience members were free to eat their sandwiches and walk in and out as they pleased between movements.

Now the overcrowding encouraged just such an unpretentious atmosphere, for the 500 available chairs were quickly filled, leaving as many people again to lean against the walls, stroll around, or sit upon the floor.

‘What sort of people were these who felt more hungry for music than for their lunches?’ asked Clark. ‘All sorts. Young and old, smart and shabby, Tommies in uniform with their tin hats strapped on, old ladies with ear trumpets, musical students, civil servants, office boys, busy public men, all sorts had come.’

The programme they heard that day began with two short Sonatas by Scarlatti and two Bach Preludes and Fugues, followed by Beethoven’s Appassionata, a group of Schubert’s Dances, a Waltz and Nocturne by Chopin, the three Intermezzi from Opus 119 by Brahms, and finally Myra Hess’s famous arrangement of ‘Jesu, Joy of Man’s Desiring’. 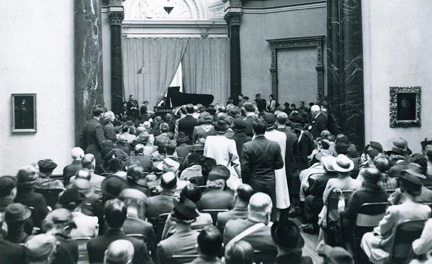 ‘The moment when she played the opening bars of Beethoven’s Appassionata will always remain for me one of the great experiences of my life,’ Clark said later, ‘It was an assurance that all our sufferings were not in vain’.