Director of the National Gallery during the early years of the Great Depression, Daniel’s directorship saw some major acquisitions including the Wilton Diptych and Titian’s The Vendramin Family.

Sir Augustus Moore Daniel was born on 6 December 1866. His interests were varied and included the study of paintings, but he was also a student of science and medicine.

His first experience of arts administration came when he served as Assistant Director of the British School at Rome between 1906 and 1907. In 1925 he was appointed a Trustee of the National Gallery, and in January 1929 he relinquished his trusteeship to become the Gallery's Director. He remained in this position until the end of 1933. Daniel died on 7 November 1950.

A Regatta on the Grand Canal
Canaletto
We have a magnificent view of the Grand Canal in Venice during the annual regatta, which was held on 2 February and attracted large numbers of visitors each year. All eyes are on the one-oared gondolas racing up the middle of the canal. Just right of centre two craft swing around the bend, tilted...
Room 38
The Wilton Diptych
English or French (?)
This small, portable altarpiece is one of a handful of English panel paintings to have survived from the Middle Ages. Made for Richard II, King of England from 1377 to 1399, in the last five years of his life, it combines religious and secular imagery to embody his personal conception of kingshi...
Room 51
Saint Sebastian
Gerrit van Honthorst
Four bloody arrows pierce Saint Sebastian’s seemingly lifeless body. One has stabbed through his leg, and a stream of blood seems to enter our space from its tip. The saint was a Roman centurion who converted to Christianity and, in punishment, the Roman Emperor Diocletian ordered Sebastian’s fel...
Room 24 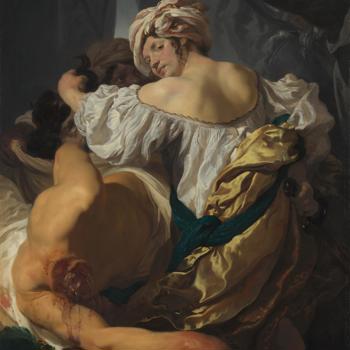 Judith in the Tent of Holofernes
Johann Liss
When her hometown of Bethulia was besieged by Assyrian forces, Judith infiltrated the enemy camp. She gained entry to the tent of the Assyrian general Holofernes, and when he was drunk after a banquet she seized his sword and cut off his head.Here she places Holofernes‘ head into a sack held open...
Room 32
The Mass of Saint Giles
Master of Saint Giles
This panel is one of four surviving fragments of a large altarpiece that showed the lives of various French saints, many with royal connections. Charlemagne, Holy Roman Emperor, kneels beside an altar at which a priest is performing Mass. At the top an angel flies down from heaven with a divine p...
Not on display
Saints Zeno and Jerome
Francesco Pesellino and Fra Filippo Lippi and workshop
This large pala (an altarpiece with a single, unified surface) was painted for a church in Pistoia, but sawn into pieces in the eighteenth century. It was reassembled in the National Gallery – look closely and you can see lines where the fragments were put back together.Two fourth-century saints...
Room 60
The Vendramin Family
Titian
This is Titian’s largest group portrait. The man in a red robe is probably Gabriel Vendramin (1484–1552). The man holding the altar may be Gabriel’s brother, Andrea Vendramin (1481–1547), and the boys are his seven sons. On the altar is a reliquary of the True Cross that their great-great-grandfa...
Room 9