Image: Detail from Panini, 'The Lottery in Piazza Montecitorio', 1743-4

By the eighteenth century, the Grand Tour had become an established part of a young aristocrat’s education. Lasting anywhere from several months to several years, a Grand Tour voyage involved visiting the great sites and monuments of Europe. Italy held a particular allure, combining the treasures of classical antiquity with the more recent artistic achievements of the Old Masters.

Many artists responded to the market created by these wealthy visitors. In Rome, Pompeo Girolamo Batoni became the portrait painter of choice for British Grand Tourists, often depicting his sitters alongside the works of classical antiquity they had travelled to admire. Other artists, such as Canaletto in Venice and Giovanni Paolo Panini in Rome, painted souvenir views of their respective cities. Bernardo Bellotto was unusual for enacting a Grand Tour in reverse, taking the meticulous and evocative mode of view painting he had learned in his uncle Canaletto’s studio to the court cities of northern Europe.

Christ carried to the Tomb
Sisto Badalocchio
Christ’s body has been taken down from the Cross and is being carried on a shroud to his place of burial. His head rests limply on his shoulder; his pale, foreshortened body is the focus of a whole retinue of grieving figures, each expressing their sorrow in a different way.This small picture is...
Room 37
The Holy Family with Saints and Angels
Lubin Baugin
The Virgin Mary clasps two small children – Christ and John the Baptist – to her lap. Saint Elizabeth, mother of the Baptist, kneels beside her. In shadow, behind the brightly lit group in the foreground, are Mary’s husband Joseph and angels. Although the characters in this scene are from the Bib...
Room 37
Christ appearing to Saint Peter on the Appian Way
Annibale Carracci
Saint Peter fled Rome after Christ’s crucifixion, scared that he too would be executed by the Romans; here, he stands in shock as Christ passes him on the road. When Peter asked Christ where he was going – the question in this painting’s title – he replied that he was headed to Rome to be crucifi...
Room 37
Marsyas and Olympus
Annibale Carracci
A naked golden-haired youth sits on a rock, playing the panpipes; another set of pipes hangs from the tree behind him. An older bearded man sits nearby on the ground, his panpipes also hanging from a branch. This is perhaps the satyr Marsyas; the youth may be Olympus, described in classical sourc...
Room 37
Silenus gathering Grapes
Annibale Carracci
Using an animal skin, two laughing satyrs with pointed ears and short tails lift a plump, drunken man to pick the grapes that dangle above him. To the right a young satyr clambers up a vine and reaches out for another bunch. The man is Silenus, teacher and companion of Bacchus, the classical god...
Room 37
The Dead Christ Mourned ('The Three Maries')
Annibale Carracci
This is perhaps the most poignant image in the National Gallery’s collection of the pietà – the lamentation over the dead Christ following his crucifixion. It was a subject to which Annibale Carracci returned frequently, especially during the last decade of his life.Here, the limp and lifeless bo...
Room 37
The Holy Family with the Infant Saint John the Baptist
Annibale Carracci
Domesticity reigns in this exquisite little picture. A delightfully pretty Virgin Mary balances a squirming, curly-haired Christ Child on her knee. She herself is perched rather precariously on a laundry basket, and her nephew, the young Saint John the Baptist, tugs at her blue mantle. On the oth...
Room 37
Young Satyr gathering Grapes
Annibale Carracci
A naked young satyr, just like a little boy but with pointed ears and a curly tail, swings from a vine to pick grapes. This irregularly shaped panel was part of a musical instrument, probably a kind of harpsichord. Together with Silenus gathering Grapes it would have formed the inside of the lid...
Room 37 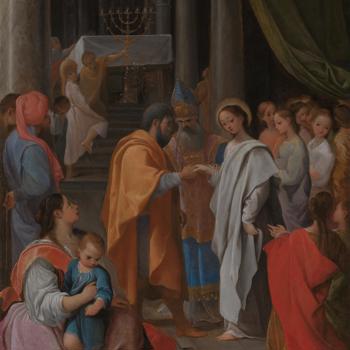 The Marriage of the Virgin
Ludovico Carracci
The Virgin Mary, in white, places her hand in Saint Joseph’s while the dove of the Holy Ghost hovers above the altar of the Temple in Jerusalem. The high priest joins the couple in matrimony, surrounded by a crowd of onlookers. Mary’s virginal companions on the right are balanced by her disappoin...
Room 37
Landscape with Tobias laying hold of the Fish
Domenichino
A young man kneels on a river bank, struggling to pull a large, wriggling fish out of the water. Behind him an angel points to the fish, and is clearly instructing him what to do with it. This is the story of Tobias and the Angel as told in the apocryphal Book of Tobit. Following the angel’s dire...
Room 37
Saint George killing the Dragon
Domenichino
Saint George, a Christian knight, saved a city which was being terrorised by a dragon. Here he charges the beast, who crouches on a grisly collection of bloody bones. The princess, who was to be its next meal, makes a hasty escape on the left.Although ostensibly a history painting, it is the land...
Room 37
The Vision of Saint Jerome
Domenichino
An elderly but muscular man with an impressive beard sits in a rocky landscape. Beside him is a pile of books, on top of which sits a skull wearing a cardinal’s hat. He leans on a second pile, and points to the text of an open volume resting on a rocky ledge. This is the fourth-century scholar an...
Room 37 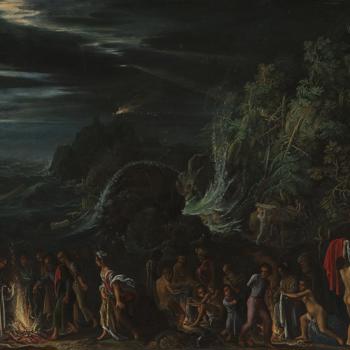 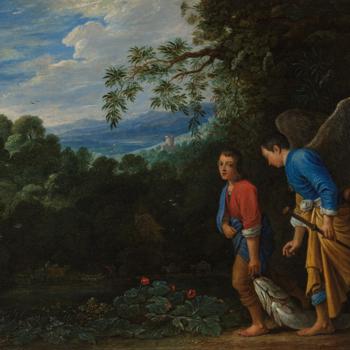 Tobias and the Archangel Raphael
After Adam Elsheimer
This scene comes from the apocryphal Book of Tobit. Old and blind, Tobit had sent his son Tobias on a long journey to collect a debt on his behalf. Here, Tobias drags an enormous fish across the ground. He is watched closely by the Archangel Raphael, who had instructed the boy to catch a fish, th...
Room 37
The Dead Christ mourned by Two Angels
Guercino
This small painting depicts a solemn religious scene. Two angels kneel in quiet contemplation next to Christ, whose body has been taken down from the Cross following his crucifixion. While the Gospels make no mention of angels alongside the dead Christ, two are said to have been present at his to...
Room 37
The Presentation of Jesus in the Temple
Guercino
Forty days after his birth, Mary and Joseph brought the infant Christ to the Temple in Jerusalem. According to Jewish custom, all first-born male children were to be taken to the Temple to be presented to God in a ceremony that involved the sacrifice of two doves or pigeons, visible here at the f...
Room 37
Saint John the Baptist preaching in the Wilderness
Pier Francesco Mola
Saint John the Baptist sits on a rock in a wooded landscape. He is preaching to a group of people in Oriental dress: according to the Gospel of Luke (3: 1–17), John spent some years living as a hermit in the wilderness, preaching repentance and baptising people in the river Jordan. His followers...
Room 37
The Rest on the Flight into Egypt
Pier Francesco Mola
The holy family are resting from their travels in this small pastoral scene. The Virgin Mary sits on a rock, absorbed in nursing the Christ Child; a bundle and pitcher lie on the ground beside her. Saint Joseph leans on the rocky ground beyond, looking up at a small cloud above the Virgin’s head,...
Room 37
The Coronation of the Virgin
Guido Reni
Paintings of the coronation of the Virgin Mary typically show her being crowned by Christ and God the Father, often accompanied by the Holy Ghost in the form of a dove. This work, however, mixes elements of the coronation with those of Mary’s assumption (when angels carried her body and soul to h...
Room 37
Moses defending the Daughters of Jethro
Carlo Saraceni
This picture illustrates an episode in the life of Moses (Exodus 2: 16–19). Having fled Egypt, Moses was resting by a well in the land of Midian when seven women, the daughters of a priest named Jethro, approached to draw water for their sheep. A number of shepherds tried to drive them away, but...
Room 37
The Holy Family
Bartolomeo Schedoni
The Virgin Mary holds her infant son on her knee, supporting him as he uses his finger to help him follow the words in an open book. The Child traces the line of text with one hand, while the other rests tenderly on his mother’s thumb. Saint Joseph gently supports the book in this charmingly inti...
Room 37