Some paintings in the Gallery, acquired as autograph works by a particular painter, have subsequently been found to be the work of an assistant, follower, copyist or forger. In the case of Gossaert’s jewel-like Virgin and Child, the opposite is true. Long regarded as merely a late copy after the original, the removal of overpaint and a thick, discoloured varnish from the surface of the painting revealed it to be a beautiful and authentic work by Gossaert. 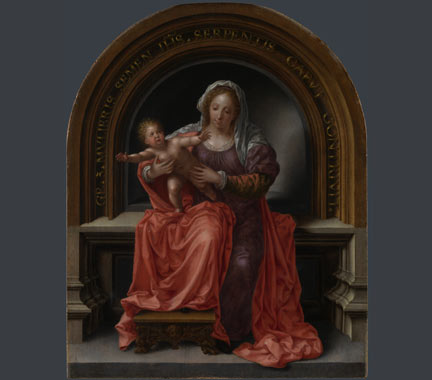 Jan Gossaert, The Virgin and Child, 1527

The National Gallery’s painting is one of at least six painted versions of a composition by Jan Gossaert, which was also reproduced in a print by Crispijn de Passe (1564–1637) in 1589. Until recently none of the versions had satisfactorily been identified as the original, and the Gallery’s picture was regarded as a late copy.

In 1994 the painting was studied as part of the Gallery’s ongoing programme of research towards a catalogue of 16th-century Netherlandish paintings. The surface of the painting was masked by a discoloured and degraded varnish, and what little was visible was disguised by clumsy repaints. The beautifully painted inscription seemed the most promising part of the work – but this was enough to prompt a more thorough scientific investigation.

Dendrochronological analysis to determine the age of the oak panel support found that the painting could have been made as early as 1509. It would be highly unlikely for a ‘late copy’ to have been painted on an early 16th-century panel. Comparison of the X-radiograph of ‘The Virgin and Child’ with de Passe’s engraving showed that the original design beneath the overpaint corresponded precisely with the print.

Paint samples, analysed in cross-section, also gave promising results: the ground and priming layers were consistent with 16th-century Netherlandish paintings. The disfiguring varnish, which gave the painting the appearance of a much later work, was also studied. GC-MS analysis identified a particular combination of components that had prevented the thick varnish, probably applied in the 19th century, from drying properly, resulting in wrinkles and surface cracks.

Removal of the varnish revealed the extent of the repainting. A photograph taken under ultraviolet light during cleaning shows the left half of the painting still covered with the old varnish, which has a greenish fluorescence. 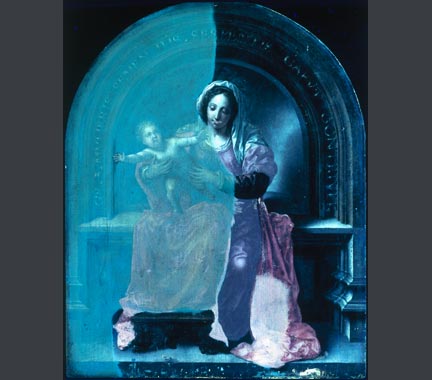 ‘The Virgin and Child’ during cleaning. Under ultraviolet light, the old varnish at left has a greenish fluorescence

On the right side the varnish has been removed, but overpaint still remains on the lower right portion of the Virgin’s garments. The bright pink fluorescence indicates the presence of a red lake pigment, probably madder, applied in the 19th century. Here and in other parts of the Virgin’s garments, the overpaint seems to have been applied to minimise contrast in the lighting and modelling of the folds. Her face was also modified to appear more conventionally pretty. Indeed, all of the overpainted alterations seem to have been made not to disguise damages, but for reasons of taste.

Once the thick varnish and overpaints had been safely removed from the Gallery’s picture, infrared reflectography revealed a free and sketchy underdrawing, similar to underdrawings on other autograph paintings by Gossaert. In contrast, the underdrawing on one of the versions of ‘The Virgin and Child’ considered by some to be Gossaert’s original (Alte Pinakothek, Munich) is rigid and schematic, suggesting that the artist of that painting was working from some sort of tracing.

The combination of detailed scientific analysis and skilful restoration has transformed Gossaert’s ‘The Virgin and Child’ from 'superfluous' to superb!