Acquired with the John Julius Angerstein collection in 1824, The Adoration of the Shepherds was one of the first Dutch paintings to enter the National Gallery. The evocative effects of light and shadow in this intimate nocturnal scene were especially admired. More recently, the attribution to Rembrandt has been questioned, largely because of the painting’s uncertain relationship to another composition by the artist of the same subject. 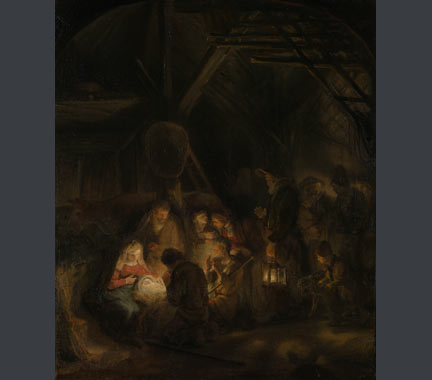 Pupil of Rembrandt, The Adoration of the Shepherds, 1646

‘The Adoration of the Shepherds’ is closely related to a painting by Rembrandt of the same subject and about the same date in the Alte Pinakothek, Munich. However, the precise nature of the relationship has long puzzled scholars. The Munich version is one of seven paintings illustrating the life of Christ, commissioned by the Dutch stadholder (chief magistrate) Frederik Hendrik, and painted by Rembrandt between 1632 and 1646. It is about one-third larger than the National Gallery picture and the composition is reversed, so that the holy family is to the right and the worshipping shepherds are to the left. 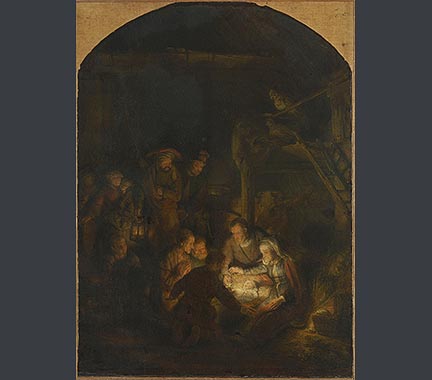 It is generally agreed that the London painting is the later of the two works. There are so many differences between the two paintings, however, that the Gallery’s work must be considered more of a variant than a copy. Pentimenti indicate that the artist made additional changes as he worked.

But is the Gallery’s painting by Rembrandt? Why was it made? A recent cleaning, combined with scientific analysis, connoisseurship and art historical research, have improved our understanding of this painting.

In 2009 ‘The Adoration of the Shepherds’ was carefully cleaned to remove several layers of thick and obscuring varnish. Below the varnish and above the original paint layer was a patchy resinous layer, warm in tone. This appeared to have been applied over most of the painting, except those parts of the figures illuminated by the lantern and by the glow surrounding the Christ Child. Analysis by FTIR and GC-MS failed to identify anything particularly distinctive about the substance, and it was concluded that it was probably overpaint from an early restoration campaign.

As the painting was gradually freed of murky varnish and overpaint, it was increasingly evident that the brushwork and application of paint were quite different from autograph works by Rembrandt. The figures are rather flat, and little effort was made to manipulate the paint texture to accentuate highlighted areas, as Rembrandt would have done. Based in part on these stylistic observations, it was concluded that the painting was probably made by an artist close to Rembrandt, not by the master himself.

Examination of a paint sample by XRD revealed that the ground preparation is a single layer of roughly textured paint combining silica (quartz) with a little lead white and umber. To date, such brown ‘quartz’ grounds have only been identified in paintings by Rembrandt and artists in his immediate circle.

Cross-section of paint sample from the dark background, showing (at bottom) coarse-textured brown ‘quartz’ ground. ‘The Adoration of the Shepherds’, National Gallery

Other evidence also places the painting in Rembrandt’s studio. An X-radiograph of the Munich work shows that the shepherd kneeling by the manger and silhouetted against the light originally had his hands folded in prayer before his chest, as in the London version. But in the final painting Rembrandt changed the pose to one with outstretched hands. The artist who painted the variant (now in the National Gallery) must therefore have seen Rembrandt’s painting in the studio before this change was made.

Copies in the studio

In Rembrandt’s studio, copying works by the master was an important part of a young artist’s training. The copies made by pupils after works by Rembrandt can be divided into distinct categories: more or less exact copies of the entire composition, partial copies of individual figures, and variants such as ‘The Adoration of the Shepherds’. Because paintings in the last category of copies differ the most from the model, they represent greater invention on the part of the copier, and therefore the most advanced phase of mastering through imitation. While the Gallery’s picture would appear to have been painted by an advanced pupil in Rembrandt’s studio, it has not yet been possible to attribute it to a specific hand.

The Adoration of the Shepherds
Pupil of Rembrandt
1646
Tag: Painting
Read more