Following its discovery in the 1930s, Il Tramonto (The Sunset) was restored three times in 30 years. Each restoration dealt with areas of loss in different ways, sometimes imposing imaginative reconstructions of damaged parts. Recent investigations of the painting have allowed scholars to be more certain about which areas are original, and which are not. The artist’s original intent can now form the basis for discussions of attribution and iconography. 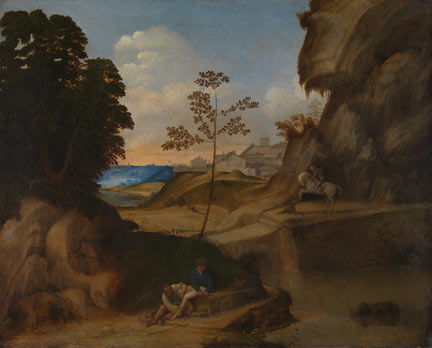 The painting now known as ‘Il Tramonto’ was discovered in a villa not far from Venice. A photograph which appeared in ‘The Illustrated London News’ in November 1933 recorded its appearance at that date. 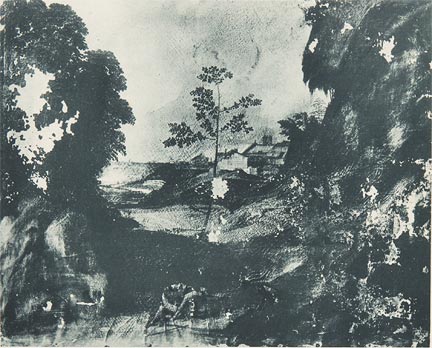 It showed substantial damage and loss of paint in the trees on the left, in the very centre of the canvas and in the rocks at the upper right. At the lower right there was a hole right through the support, surrounded by considerable flaking and overpaint. This photograph, however, taken in raking light, perhaps exaggerates the extent of the damage. In reality, details such as the sunset or the foreground pebbles, which have been so important in establishing the attribution to Giorgione, appear to be well preserved.

Not long after its discovery, the painting was sent to Augusto Vermehren, a restorer who also worked for the Uffizi Gallery in Florence. He cleaned and lined the canvas before filling the losses with putty and retouching. A second photograph shows the result of his interventions as well as areas of loss which he did not attempt to reconstruct – particularly evident in the pool on the lower right. 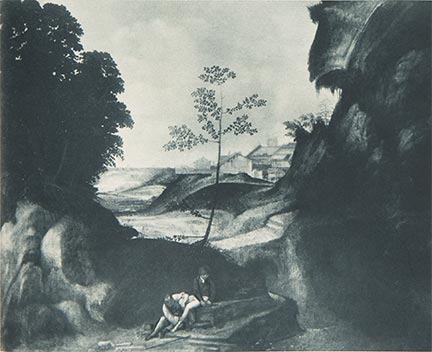 The painting was bought by the young Russian dealer Vitale Bloch who, having obtained a licence to export the work from Italy, sent it to Rome for a second restoration in 1934. The work was carried out by Theodor Dumler, supervised by Mauro Pelliccioli and advised by the celebrated art historian, Roberto Longhi. 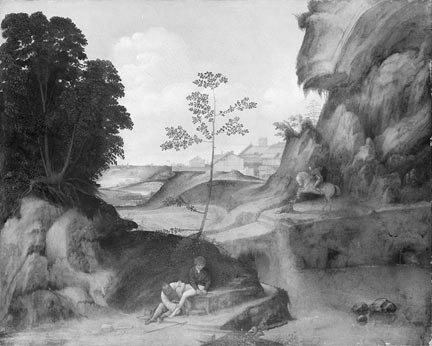 Photograph taken at the National Gallery in 1956, after the 1934 restoration by Theodore Dumler, showing the appearance of Saint George and three rocks in the water

Following this restoration, the mounted figure of Saint George appeared in the area of the large loss in the lower right, as well as three rocks in the water. The technique used to construct Saint George, using patches of old painted canvas, suggests that those involved were hoping to mislead a future purchaser into believing that this area was less damaged than was actually the case. The deception is easily exposed by X-radiography.

Bloch moved the painting to London and consigned it to a bank vault, where it remained unseen until the Giorgione exhibition in Venice in 1955. Following the exhibition, the National Gallery made moves to acquire it. The acquisition process was, however, complicated by lack of funds, and anxiety over condition and quality.

The painting was eventually purchased in 1961. The next step in its history is confusing. It would seem that the Gallery’s restorer, Arthur Lucas, removed Dumler’s three rocks in the centre of the pool, only to replace them with the semblance of an aquatic monster – perhaps when he realised the extent of damage in this area. Reduction of the heavily toned varnish applied to disguise the 1934 ‘restoration’ revealed the intense turquoise blue saddlecloth of the horse. Surprisingly, this was announced as a revelation in spite of the fact that the Gallery had taken the X-radiograph which showed that this part of the painting is entirely spurious. From 1961, then, the picture looked much as it does today.

Recent re-examination of the X-radiographs taken in 1956, together with a new infrared reflectogram, has confirmed that in the 1934 restoration pieces of old painted canvas were inset into areas of loss. The grey horse himself, and his saddlecloth, seem to have been pieced together from many pieces of old canvas and are therefore not original. 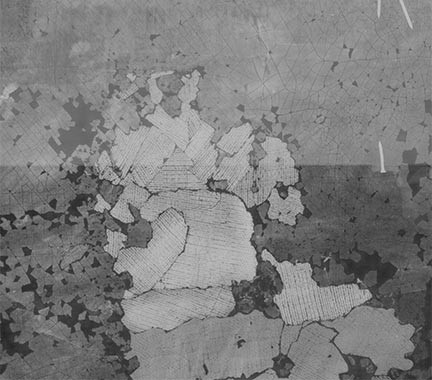 Detail of X-radiograph from the area of the Saint George, showing pieces of old canvas inset into areas of loss

It would thus appear unlikely that Giorgione’s original painting ever included a figure of Saint George. What now appears as the dragon’s tail is original paint, but might have begun life as tree roots. The other figures are more puzzling. The ‘hermit’ on the far right is extensively repainted, but his head and arms could be based on original fragments. The pig-like creature beneath him is more likely to have been transformed from a rock, while the beast in the middle of the pool is a complete fabrication. By contrast, the beaked monster emerging from the water on its left edge is genuine, as are the two men seated at centre.

These recent clarifications may alarm those who have proposed detailed interpretations of figures and animals that have turned out to be later additions. But by allowing us to focus on the areas of original paint, they eliminate any doubt that the passage of greatest painterly and atmospheric brilliance – the distant landscape with its melting effects of light – is substantially original, and thus the best ‘document’ of Giorgione’s unique hand.