Seventeenth-century collectors competed eagerly for van Mieris’s paintings, admiring their fine detail and enamel-like finish. Many of his compositions exist in several versions. The National Gallery’s version of A Woman in a Red Jacket feeding a Parrot is so close to the original painting that it has been considered a repetition by the artist himself. But did van Mieris actually make copies of his own work? And if so, why? 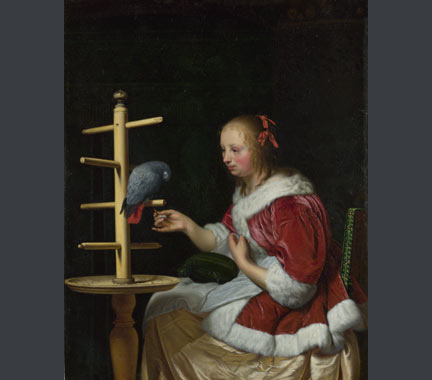 Frans van Mieris the Elder, A Woman in a Red Jacket feeding a Parrot, about 1663 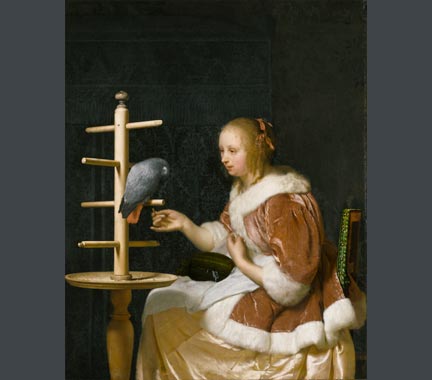 Frans van Mieris the Elder’s diminutive paintings were renowned for their meticulous brushwork and high degree of finish. They were exorbitantly priced, prized by collectors and widely emulated by his contemporaries. Van Mieris typically painted on wood or copper panels; the smooth surface of these supports (compared to canvas) accentuates the elaborate detail of his work.

This exhibition features two nearly identical versions of ‘A Woman in a Red Jacket feeding a Parrot’, both authentic paintings of the 17th century. The National Gallery painting was acquired in 1871 as an original work by Frans van Mieris. It was well known at the time that there was a signed version of the composition in the Alte Pinakothek, Munich, but the Gallery picture was nonetheless highly regarded as an autograph repetition by the artist. The Munich painting was sold from the collection in 1936 and, after many years in an English private collection, was acquired in 2008 by a private collection in New York.

The image was among the most popular that van Mieris devised: in addition to these two paintings, more than 20 copies of the composition are known (including one in the collection of HM Queen Elizabeth II). Some are modern, and most differ from the original to a greater or lesser degree. The New York painting, signed and dated by the artist (the inscription is no longer visible), is accepted as the prime version.

Facsimile of signature (no longer visible), ‘A Young Woman feeding a Parrot’

Yet the exceptional quality and fidelity of the National Gallery’s ‘A Woman in a Red Jacket feeding a Parrot’ has led many scholars to conclude that it is a replica made by van Mieris himself.

Side-by-side scrutiny of the two paintings reveals several differences. The New York painting is painted on an oak panel, while the National Gallery work is painted on a copper panel, resulting in a subtly different appearance. 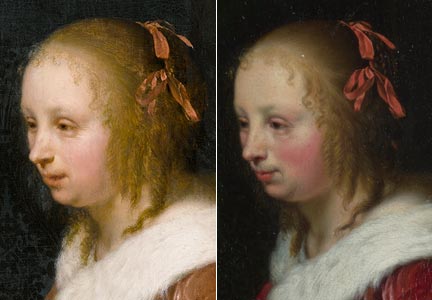 Paintings on metal are less likely to develop surface craquelure and can survive in a near-pristine state. The perfectly smooth surface of the metal support encourages an ‘enamel-like’ finish: comparison of details such as the woman’s hair ribbons and face-framing curls shows the meticulous precision of the London painting, as opposed to the softer, more suggestive brushwork of the New York version. 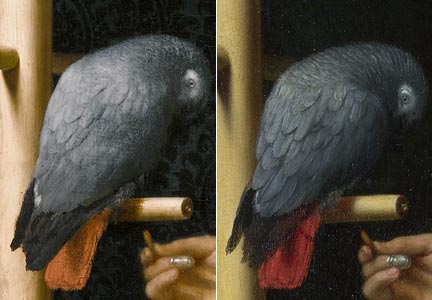 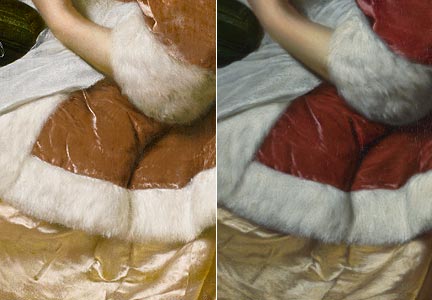 In the London version these same features are more uniformly painted. The bed curtain dimly seen in the back of each picture is blue in the New York painting and green in the London version. They are also painted quite differently – in the New York picture the curtain is formed of a blue underlayer with the brocade pattern painted on top in dark grey, whereas in the National Gallery picture the curtain was painted with a greyish underlayer, the pattern painted over it in black, and a greenish glaze (probably verdigris) applied over the whole.

There are a few other cases in which it has been proposed that van Mieris produced a second version of one of his popular compositions, presumably in response to requests from eager clients. In each case, one example bears the artist’s signature and the other is unsigned. The signed paintings exhibit the artist’s characteristic talent for evoking the tactile sense of objects within the painting, while the unsigned versions have a more uniform surface. They are technically accomplished, but often devoid of atmosphere.

Unfortunately we lack any documentary evidence about the workings of van Mieris’s studio, and no distinctive aspects of materials or technique have been identified that might enable us objectively to separate the work of the master from that of an assistant. Subtle differences in observation, handling and the skill with which textures are represented suggest that the paintings bearing van Mieris’s signature were actually executed by him, while the unsigned replicas, among them the National Gallery’s version, were probably made by an extremely accomplished but as yet unidentified artist, presumably working in his studio.

A Woman in a Red Jacket feeding a Parrot
Frans van Mieris the Elder
about 1663
Tag: Painting
Read more