In the Beaucousin collection NG656 was attributed to Gossart; this attribution has never been challenged.10 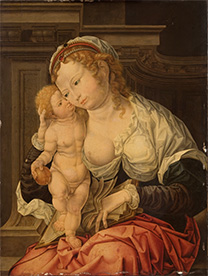 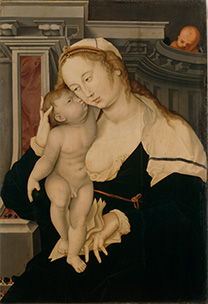 Although the man has not joined his hands in prayer, he has placed his right hand on his heart and holds a rosary in his left hand. He is clearly at his devotions and his gestures may be compared with those of Gossart's unidentified donor on the left wing of a small triptych (Brussels), where the donatrix on the right wing is in a conventional attitude of prayer.11 NG656 is therefore from a triptych or a diptych. The asymmetrical architectural background was probably continued in another panel. At least four versions are known of a ‘Virgin and Child’ which was evidently in the style of Gossart and where the architectural background complements and completes the background of NG656. They are probably copies of the lost left wing of the diptych or triptych of which NG656 formed part. Two of the copies are or were in a private collection in Brussels: one measured 50 x 31.9 cm; the other, attributed to van der Veken, measures 51 x 37 cm.12 Both of these, and another version in Philadelphia (54 x 40 cm: fig.6), seem to be straightforward reduced copies of Gossart's lost original. In all three, the Virgin is dressed in blue, red and purple, though there are slight variations in the colours. The fourth is a variant by Hans Baldung, signed with his monogram HBG and dated 1530 (Nuremberg; 99 x 68 cm: fig.7). Baldung's Virgin is dressed in black, blue and grey.13 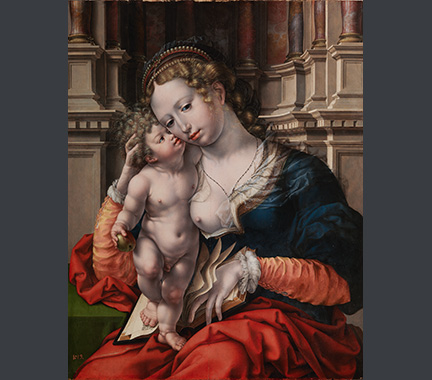 The figures of the Virgin and Child recur, with a different architectural background, in a painting in the Prado, clearly by Gossart himself (fig.8). The Virgin wears a blue dress and a red mantle but her sleeves are orange-yellow, whereas in the Brussels and Philadelphia pictures they are purplish.17 The Prado ‘Virgin and Child’, which belonged to Philip II of Spain, appears not to be from a diptych.18 The more balanced arrangement of the background architecture and the strong contrasts of colour support the theory that it was designed as an independent image. It is difficult to say whether the Prado ‘Virgin’ was an adaptation by Gossart himself of his lost ‘Virgin’, or vice versa. In either case, the two were probably painted at much the same time.