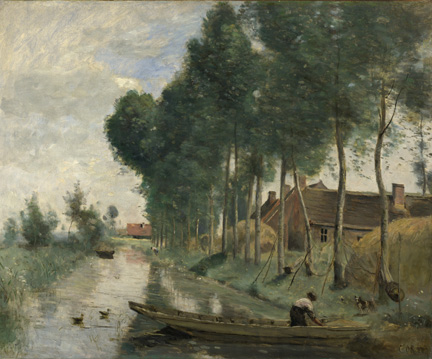 The ground is white, consisting of lead white extended with china clay or talc, and a calcium compound. The most significant feature of 'Landscape at Arleux-du-Nord' is its light tonality, which is characteristic of a number of other paintings by Corot from the 1870s. While this can be seen as a return to the palette of his early work, for example 'Avignon from the West', probably painted in 1836, it has also been suggested that he was possibly responding to the Impressionist palette of Pissarro, Sisley and Monet.2

The painting also exhibits a formality of composition and clarity of style which can again be associated with his earlier period, and the foliage is less shimmering and more solidly painted.  However, closer examination does reveal some traits of Corot’s characteristic late technique, for example the area of sky near the top left is extremely cursorily painted, using circular brushstrokes of thin paint.

He has used dark fluid paint to add extra branches to the tree furthest to the right, although there is less of this technique than in other late paintings such as 'The Oak in the Valley' (NG 6466). The foliage highlights in lighter and silvery greens are also typical of his late work; here a few branches have been extended over the sky, as if floating off the trees.

As was his practice throughout his life, Corot has painted the sky at a late stage of working, and the ground is visible around the trees where the sky has been brought around. Corot has extended the sky over some of the floating foliage on the right, the trees to the right, the bushes and trees on the left, and also over a branch in the gap in the trees at top centre (fig. 2). 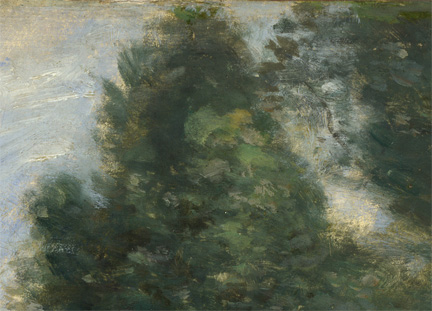 According to Robaut, NG 6531 was painted in two stages, in front of the motif in 1871, and back in the studio in 1874. Areas of the sky vary in both colour and thickness, suggesting reworking. However, technical evaluation is not conclusive. A paint sample taken from a thick layer of strong blue at the centre does not reveal two layers of paint added at separate sessions, suggesting that  in fact the whole of the sky was painted in one sitting, in all probability back in the studio.

Analysis of the paint media has shown that the artist used paints with different binders. In an area of green water the medium is linseed oil containing some pine resin, whereas in a touch of brighter green the medium is heat-bodied walnut oil with a trace of copaiba or a similar resin.3  It is not unusual, however, for different oils and resins to be used with different pigments in different parts of a picture.

At the upper edge there is a thin varnish layer between the top yellow-green layer and a very pale layer of similar colour to the ground, and this is perhaps a varnish layer applied after the first campaign or just prior to the second.  For further evaluation of Corot’s reworking touch the Subject tab above.

NG 6531 has not been treated by the Gallery. The paint is in generally good condition but the varnish is slightly yellowed.