According to Robaut there are two versions of this composition, both dating from Corot’s stay in northern France in 1871.4  The first was painted in May 1871, while Corot was staying with the Robauts in Douai, based on a study by Robaut himself (fig. 3).5   In July 1871 Robaut rented a cottage near Arleux for Corot’s use so he was able to visit the actual motif and paint a second version from nature, which is NG 6531. As outlined in Technical notes, this version was reworked and completed back in the studio, more than three years later; Robaut gives an exact date of 24 November 1874. 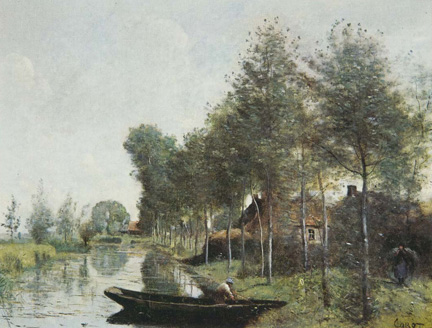 The site depicted is probably the Canal de la Sensée, which now joins up with the Canal du Nord between Arleux and Palluel. The two paintings are from slightly different viewpoints, and the later version is painted more from the left, and from a slightly lower angle, so that the right bank seems higher and trees are cut off. The river appears to slope down to the right.

There are small compositional differences between the two pictures: in the National Gallery painting there are fishing nets and a dog on the bank, in the earlier version an old woman with a bundle on her back trudges along. In the background, next to the house, a large round tree stands in the earlier version, but Corot did not paint this when he did his own study from nature. Both versions have haystacks on the bank, although in the National Gallery version Corot has painted a further stack next to the building; in the earlier version it is a bush which obscures the house. Generally the earlier painting is more successful and areas that read well are repeated clumsily in the second, National Gallery, version. For example, the shadow cast by the further haystack in NG 6531 is most unconvincing, seeming as it does to emanate from the two tree trunks in front.

There are also stylistic differences between the two paintings.  In general the National Gallery painting is more flatly and more densely painted, for example the foliage and the two haystacks by the side of the river. The surface of the earlier version is busier, with more surface touches – dots and dashes of paint in the foliage and trunks of the trees.  Visual comparison with the earlier version would suggest that the highlights in the trees and the water in the later painting were added in the second campaign; perhaps when Corot came back to rework this later version he sought to emulate the picture surface of the first.

In the bottom right corner a few white and off-white dots in the grass are similar to the many dots enlivening the grass of the earlier painting. The reeds on the left bank are also overlaid with green dots and dashes as in the first version. Likewise dashes of lighter green and green-white in the trees, particularly the tree furthest in the row, are probably retouchings. The area of the water is also likely to have been reworked.

A layer of pale blue-grey paint has been added at a late stage, and been brought over some of the reeds and ducks, partly obscuring them, particularly the left-hand duck (fig. 4). Just above there is scratching with the end of the brush in the grey-blue of the paint. The application of the sky is tightly bound up with the final touches of foliage and other highlights that Corot also almost certainly added in the last stages, providing further evidence that these were the areas worked in the second campaign on the picture when it was back in the studio.

Corot would often repeat a composition already painted in front of the motif back in the studio. The studio versions were often called ‘souvenirs’, a term which Corot also applied to views painted from memory or scenes which were a composite of a number of views. Writers have tended to stress the generalised nature of the later versions, where Corot sacrificed detail and objectivity for general effect and stylisation.

Here the situation is reversed, in that the version painted after nature is the more difficult to read, and less satisfactory. The fact that it was begun in front of the motif and finished years later might explain the clumsier areas and more generalised forms.