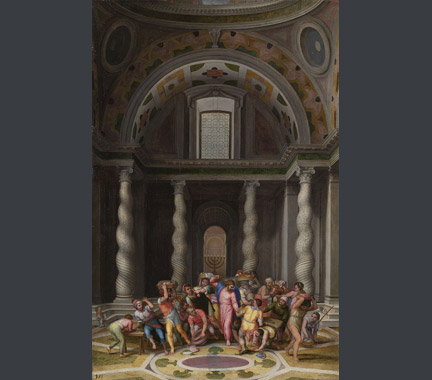 Marcello Venusti is recorded in Rome in the 1540s in the workshop of Perino del Vaga. Towards the end of this decade, perhaps following Perino’s death in 1547, he came to the attention of Michelangelo Buonarotti. Venusti was to be one of three younger artists with whom the 75-year-old master chose to collaborate. Michelangelo provided help for these artists in the form of compositional drawings, rather as he had done for Sebastiano del Piombo in the 1510s (most notably in ‘The Raising of Lazarus’, fig. 1) at least initially to counteract Raphael’s dominance of the Roman art scene. 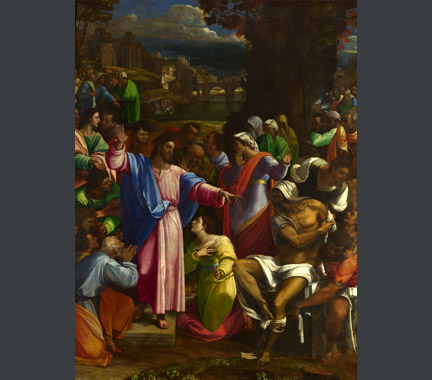 Michelangelo’s motivation was not jealousy of a rival (following Raphael’s death he had none), but a desire to disseminate his own inventions in paint, an art form he had abandoned. This was probably because fresco was too physically demanding for an elderly man, but also due to his extensive architectural commitments, particularly from 1547, when he became architect of St Peter’s Basilica. The resulting pictures, based on Michelangelo’s inventions, were much valued as it was virtually impossible for collectors to purchase works by his own hand.

The first of Venusti’s works after Michelangelo was a direct copy of the ‘Last Judgement’. Venusti’s subsequent involvement with Michelangelo was more collaborative, and it has been suggested that the labour and finish of Michelangelo’s drawings made for Venusti anticipate the refined, enamel-like appearance of the latter’s paintings.1 Over the course of about a decade Michelangelo supplied Venusti with drawings for several compositions, including two altarpieces of the Annunciation,2 and several ideas for a Purification of the Temple.3 There is no documentary evidence for the attribution of the National Gallery’s ‘Purification of the Temple’ to Venusti,4 but it seems likely on stylistic grounds, as the bright colours and high finish are typical of his small-scale works. Venusti’s role in this, as in his other paintings executed in association with Michelangelo, was to translate Michelangelo’s figural compositions into paint, and to provide an appropriate architectural setting for Michelangelo’s inventions.

More than six drawings by Michelangelo survive for the ‘Purification of the Temple’,5 but only one of these (British  Museum, PD 1860,0616.2/2 verso [External link] gives any indication of Michelangelo’s thoughts on a background for his figures. Its double-arched opening was not followed by Venusti, and indeed Michelangelo’s primary interest in this composition was the elucidation of the swarming mass of traders whom Christ expels with his scourge from the sacred space of the Temple. Groups of densely packed figures had long fascinated him.6 The solution he found, most cogently expressed in a drawing in the British Museum (PD 1860,0616.2 recto) [External link], is followed by Venusti in the National Gallery’s painting with little variation.

Venusti devoted careful attention to the architectural elements of his picture, into which he placed Michelangelo’s figures. Incised lines, visible with raking light and in X-radiography, were used to plan the arches and the entablature. The marble panels on the underside of the arch were also incised. The structure of the steps was conceived before Christ and the other figures were placed in front of them. Parallel horizontal lines for the steps can be discerned in the infrared reflectogram.

The Temple in Jerusalem as St Peter's

The subject of the Purification of the Temple (Matthew 21: 12–13) in Jerusalem was particularly appropriate for the reforming spirit of Rome in the second half of the 16th century. Venusti’s temple incorporates two important features which he and his contemporaries thought had been part of King Solomon’s ancient temple, the predecessor of the temple built by Herod from which Jesus expelled the traders. These are the seven-branched Jewish candelabra, or menorah, which is placed in an arch at the vanishing point of Venusti’s architectural composition, and the four vast barley-sugar columns that hold up the entablature of the archway and vault. These twisted columns are similar to those found in Raphael’s cartoon of the Healing of the Lame Man, made in preparation for one of the set of tapestries he designed for the Sistine Chapel. They were also known as Solomonic columns, as their models (12 columns which stood as a screen around the high altar of St Peter’s, around Peter’s tomb) were believed to have come from Solomon’s Temple in Jerusalem.

Venusti’s depiction of the temple owes much to the architectural context of Rome in the late 16th century, and especially to discussions over the rebuilding of St Peter’s. Given Venusti’s indebtedness to Michelangelo, it is more than possible that these architectural features were also suggested by the Florentine polymath. During the late 1540s Michelangelo was preoccupied by building projects, and in particular the crossing of St Peter’s. Venusti’s ‘Purification’ is set in a crossing, and although the architecture stops abruptly over the arch, it is evident that a Greek-cross church (like that which Michelangelo planned for St Peter’s) was intended.

However, the most striking aspect of Venusti’s temple is the enormous quantity of inlaid coloured marble on the floor and in the arch. This is a characteristic of St Peter’s as it appears today, but it was only introduced into Roman architecture during the latter part of the 16th century, after the death of Michelangelo. Caroline Elam has pointed out the very striking similarities between an 1873 painting ‘The Interior of St Peter’s’ by the Danish painter Heinrich Hansen (fig. 2) and Venusti’s picture. 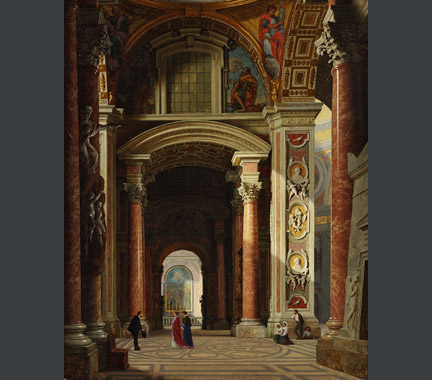 Giacomo della Porta was the first architect to use marble inlay in St Peter’s, in the Cappella Gregoriana (1572–85) and, as Federico Bellini writes, this innovation completely altered the equilibrium between mass and light in the church envisaged by Michelangelo and his predecessors.7 Venusti’s architecture in the ‘Purification’ is far more in the spirit of Della Porta than Michelangelo. This observation has considerable implications for the dating of this work. It could be that in the ‘Purification’ Venusti anticipates an architectural trend. However, as he was more of a follower than an artistic innovator, it is perhaps more likely that the National Gallery painting was made around the same time as Della Porta’s activity in the Cappella Gregoriana, in the years shortly before Venusti’s death in 1579.

To cite this essay we suggest using
Caroline Campbell, ‘Marcello Venusti, The Purification of the Temple’ published online 2014, in 'Building the Picture: Architecture in Italian Renaissance Painting', The National Gallery, London, http://www.nationalgallery.org.uk/research/research-resources/exhibition-catalogues/building-the-picture/place-making/venusti-purification-of-the-temple